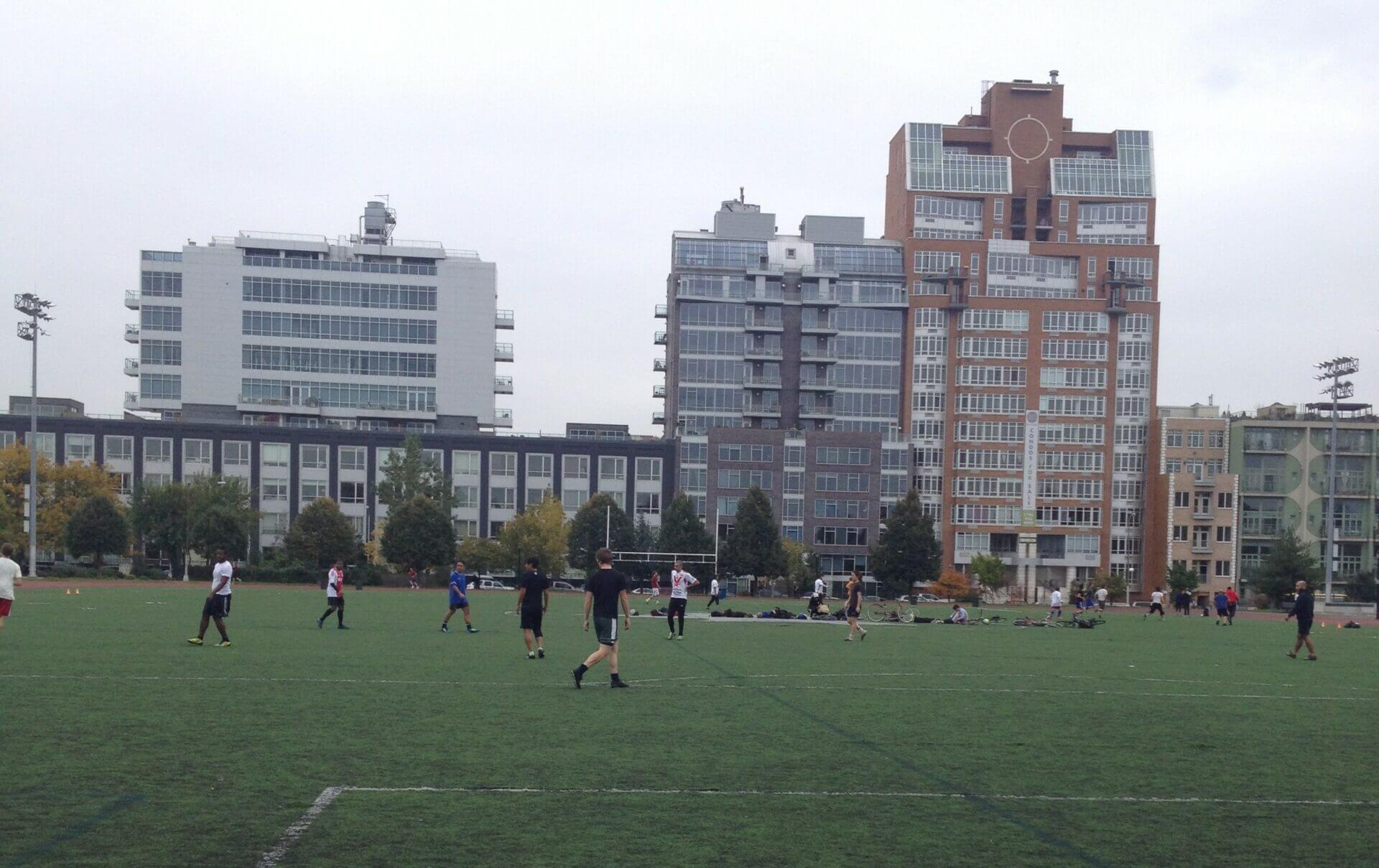 McCarren Park gets plenty of traffic, even on midweek mornings. Photo: Brooklyn Based

A trip to the McCarren Park soccer field on a Saturday morning will tell you all you need to know about park land in North Brooklyn. The space fills to the brim with small children in brightly colored jerseys  and their parents, crowded along the edge of the field, lattes in hand. Clouds of tiny black rubber pellets puff up around the kids’ feet as they traverse the well worn artificial turf.

Runners, joggers and walkers circle the track around the field, rotating at every pace imaginable. Spandex clad runners lap older couples from the neighborhood, who jockey for the outer lanes with moms pushing strollers, sometimes two or three abreast. Five or six bootcamps, outdoor yoga groups and other fitness classes crowd along the edges, eking out space wherever they can, while still more parkgoers do pull-ups and sit-ups on the fitness equipment on the Lorimer Street side, or play handball on the Union Street side.

Space in McCarren park is at a premium. And it doesn’t seem like there’s going to be any relief for the overworked greenspace anytime soon, despite promises from the city for dozens of acres of new parkland.

When the city rezoned the North Brooklyn waterfront in 2005 to transform a manufacturing zone into a residential neighborhood, there was little question that the time for change had come, with manufacturing well past its heyday.  But residents worried that the pricey new glass and steel high-rises planned for the Williamsburg waterfront would permanently change the community, making it richer, less diverse and more of a Manhattan bedroom enclave than a vibrant neighborhood. They also made it known that there were not enough parks for the rapidly growing North Brooklyn population. In response, the city mandated affordable housing units in the new buildings, and proposed an ambitious plan for more than 30 acres of new parks along the East River. Still, not everyone considered this a satisfactory arrangement.

“There was a struggle over whether we liked this plan,” said Joe Lentol, New York State Assemblyman for District 50, who represents North Brooklyn.  “And there was a struggle for open space that was going to be necessary when high rise luxury apartments were built.” 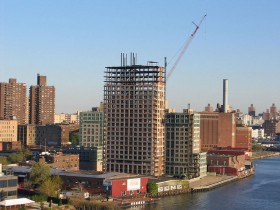 A new luxury high rise going up on the Williamsburg waterfront in May of 2005. Photo: Henry C via Flickr

If you look at the plan now it seems amazingly optimistic, a pre-recession fantasy of greenspace studded with playgrounds, cafés and bike paths stretching along the water from Metropolitan Avenue all the way up to the top of Greenpoint.  Seven years later, only small parcels of that promised space has been realized. There’s a soccer field at Bushwick Inlet Park, which is  bordered by N. 9th and 10th Streets, Kent Ave. and the East River, next door to East River State Park. That field is a tiny sliver of what was supposed to be developed into a 28-acre park, and only two-thirds of it is even usable open space. A fence blocks access to the water . (Water fountains have been installed since the last time we visited the park. -eds)

There have been some other improvements to the waterfront–the city opened Transmitter Park at the end of Greenpoint Avenue late this summer, which has given Greenpoint families a new place to picnic, stroll and play. And though the East River Ferry was not a part of the original rezoning plans, the New York City Economic Development Corporation supported the project as a service to the growing population along the waterfront, and it’s been a major relief to many frustrated commuters in G-train-bound Greenpoint.

Still, there’s a hold-up in bringing significant new park space to the people of North Brooklyn.  Despite the efforts of passionate activist groups such as the Greenpoint Waterfront Association for Parks and Planning (GWAPP), Friends of Bushwick Inlet Park and Neighbors Allied for Good Growth, pulling people together and getting City Hall to take notice is an uphill battle.  There also seems to be some confusion about exactly what they’re fighting for, and whose job it is to manage the fight.  These challenges, hashed out on a stage with many players, couple with the city’s own financial miscalculations to make the realization of new green space in North Brooklyn seem like an increasingly distant dream.

Assemblyman Lentol, a longtime advocate of parks development in North Brooklyn, said this is because the city bit off more than it can chew.

“The city made a bad deal,” he said.  “They promised these parks and now can’t afford to buy them because they didn’t act quickly enough.  I see both Parks Administration and the Mayor’s office touting all of this parkland that they’re willing to build in different communities, parks that they never promised anyone.  But the parks that they promised us they can’t afford.  This is not acceptable.” 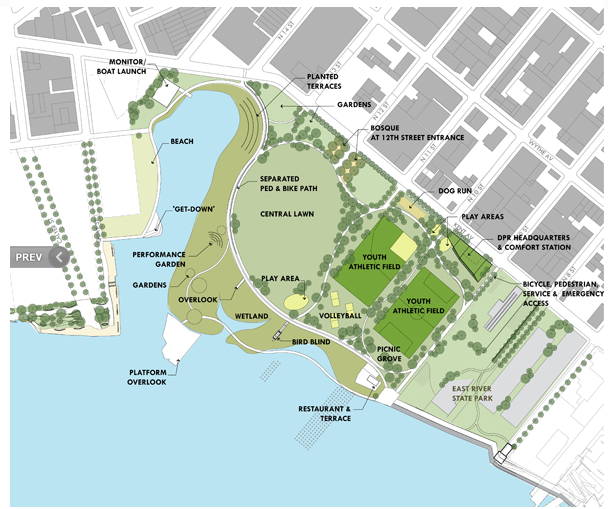 When the Bloomberg administration set out to purchase the first chunk of the 28 acres of waterfront property that was to become Bushwick Inlet Park, the plan was to step in and take it via eminent domain, according to City Councilman Stephen Levin.  The first landowner sued, and in court the city put up a price of $12 million, based on the pre-rezoning value.  The owner refused, saying that with all of the land surrounding the property rezoned, the parcel was worth the new residential value and should be priced accordingly.

The court agreed, and the city found itself having to pay $92 million to acquire just the soccer field sliver of the proposed park, according to Councilman Levin.

“Somebody made a big mistake,” said Councilman Levin, who represents Greenpoint and parts of Williamsburg, in a telephone interview.  “It left us in a situation where the acquisition of the park was going to be more like half a billion.”  Then in 2008 the recession hit, and developments weren’t going up as quickly as the administration hoped.  “So we were left in a situation where the administration was able to hide behind that,” he explained.

Another gross miscalculation, Councilman Levin said, was New York’s failed Olympic bid.  Had the city won the games, he said, Bushwick Inlet would have been the site for beach volleyball.  When it became clear that the games were going to London, plans to develop the area fell by the wayside.

Now that the focus on these commitments has waned, a variety of community activist groups are working to recapture it.  There’s a lot going on in New York City, so it’s no surprise that competition for City Hall’s attention is intense.  To have even a prayer of being heard, it pays to have a well-organized megaphone with a clear, well-articulated message coming through it.  It’s a difficult enough feat to accomplish when you’re one organization representing one park; articulating a clear message when you’re one of many is next to impossible.

Christine Holowasz, who is on GWAPP’s board of directors, said that advocacy groups in North Brooklyn do a good job of consistently putting pressure on the city.  “But I think it’s more just getting all the parties that are interested sitting down and figuring out the possibilities,” she said.  “Sometimes it’s very hard.  When you have one park it’s easier.”

GWAPP is a coalition of over 40 community organizations in Greenpoint with a broad mission to focus on education and outreach issues affecting the environment, waterfront and neighborhoods of North Brooklyn. Neighbors Allied for Good Growth, formerly Neighbors Against Garbage, has a similarly far-reaching goal of recapturing Williamsburg and Greenpoint’s waterfront, reducing local environmental hazards and advocating for public policies that promote healthy mixed-use communities.  Friends of Bushwick Inlet Park, by contrast, concentrates its efforts on the creation of the promised 28-acre waterfront park in the Bushwick Inlet.

Joseph Vance, a founding member of the Open Space Alliance, is part of an organization that faces a different challenge.  Formed in 2003 to raise funds to improve and expand local parks, OSA signed a formal operating agreement with the NYC Department of Parks and Recreation in 2008.  Instead of becoming “the McCarren Park Conservancy,” Vance said, OSA decided to become the shepherd of 120 park properties in North Brooklyn. 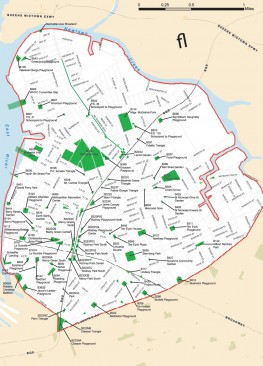 A map of all the parks OSA works with. Map: OSA

The Open Space Alliance is an organization that has the ability to influence policy, budget allotments and staffing as they affect North Brooklyn parks. OSA gets a seat at the table in talks with the City about the future of parks development in Greenpoint and Williamsburg but is not an advocacy organization.  Instead, it focuses on the maintenance and improvement of existing parks.  As such, OSA representatives say, it is not the organization’s job to make sure that the promised parks get built.

While OSA is supportive of the community’s efforts to acquire additional green space, Vance explained that they are not legally allowed to lobby city government.  “It’s not that we don’t want more,” he said.  “But it’s not our role to have marches and protest on City Hall steps.  That stuff needs to be done, but it’s not for us do.”  All the same, he said that he would love to see the community get the rest of the promised parkland along the waterfront, because North Brooklyn’s largest park right now—McCarren—is overused.  “People say we’re not doing anything, but OSA reseeded [the grass at McCarren Park] at the beginning of the summer.  There are just too many feet and too little space.”

OSA concentrates its efforts on the maintenance of parks and building the alliance to the point that it can make a much bigger impact on that front.  “The intent is, like the other alliances, to start actually acquiring equipment, like lawn mowers.  We want to get equipment and staff that can supplement what parks does.”

So what is the biggest challenge OSA faces?  “Money,” Vance said, without hesitation.  “Money makes it all go away.”

OSA’s annual budget fluctuates, according Kurt Cavanaugh, assistant director, and it generates revenue primarily through donations, benefits and events such as concerts.  It does not operate on a membership model, as several other park alliances and conservancies do, but instead solicits individual donations.  OSA generated $106,074 in total revenue in 2010, according its most recently available tax documents.  The Prospect Park Alliance, in contrast, generated over $10 million. And the Central Park Conservancy just received a gift of $100 million from a hedge fund executive, to put it all in perspective. “It’s small compared to other conservancies but we’re very proud of what we’ve been able to do to supplement parks maintenance budgets,” Cavanaugh said.  “We fix things that are small but important, such as sprinkler valves and toilet seats.  We don’t have the money to do glamorous improvement projects.”

What, then, can members of the community do if they want to have an active, effective role in the realization of North Brooklyn’s promised parks?  Get involved, make your voice heard and don’t let up.  Community activism combined with political pressure, Councilman Levin said, is effective.

“Get the issue out there, in the public, in the press and don’t let them forget it,” Councilman Levin said.  “When you call them into a hearing and ask tough questions, it catches their attention. It brings the issues out there, makes them public and wipes away some of the mystery as to what’s going on.”

Leave a Reply to Annaliese