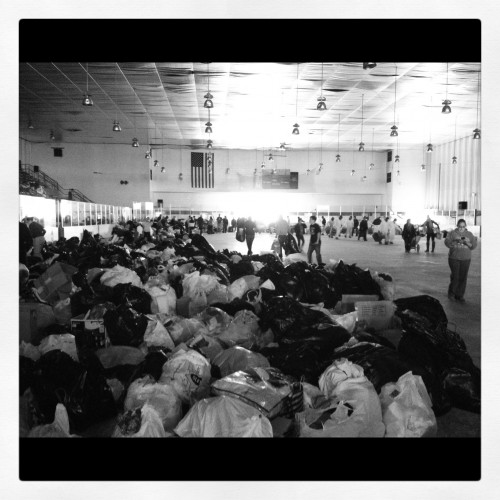 Like many people I know in New York City, I headed out to one of the hard-hit areas this weekend to volunteer. My neighbor, brother and I ended up in Long Beach on Sunday sorting donations pouring into the ice arena there, which is one of the FEMA hubs. (They’ll be open all week starting at 9am and need help.)

Truck after car after FDNY vehicle pulled up to the loading dock in back and a bucket brigade of volunteers unpacked each and every one, passing bags and boxes into the arena to get sorted.  Meanwhile, at the front of the arena, people lined up outside, waiting to meet with FEMA representatives and to pick through the boxes of clothing and canned and dried goods to get what they needed. Having spent several hours sorting through thirty-gallon garbage bags of donated goods and clothing, this is what I think every Sandy donor should know.

Sort and Label Your Clothes
Sorting and labeling your bags by clothing type and size–i.e. “Women’s Large”–is the simplest, most helpful thing you can do right now.  I walked in a naïve fool with an old Macy’s bag stuffed with assorted clothing and walked out one of those OCD women who get paid to organize closets. The arena was packed with bags of clothing that needed to be sorted and not enough hands to accomplish the task. And when a family comes in whose house has burned down and everything they own is ash and they all desperately need sweat pants, you want to be able to give them what they need right then and there. So please split things into piles and grab your sharpie.

To Box or To Bag
Black garbage bags are the biggest and most durable bag option but for the obvious reasons they’re not that easy to label and none of the ones I saw were. People got intrepid with the white kitchen garbage bags and with bags repurposed from stores, sometimes scrawling the names of the items across them in large black script. This was helpful, but even better were the donations that were boxed, and not just because boxes inspire people to label them. It was easy to see what was in the box once open, and opening them didn’t involve trying to channel Houdini to untie the bag’s knot before giving in and ripping it open, thereby rendering the bag useless. That said, donating via any means, whether it be bag or box, is the most important thing.

Think Warm, Not “I Don’t Need This”
It’s becoming winter and many of the people who need these clothes are in homes with no electricity, heat or hot water. They need sweaters and coats and hats and gloves. They need sweats, especially men’s sweats, in particular men’s sweats size large and extra large. They do not need strapless, two-piece lavender satin bridesmaids dresses. No joke. I unpacked one. Along with open-toe sandals and kid’s hockey gear. Don’t get me wrong–people will need these things. Well, at least the sandals. But odds are they don’t need them now, so maybe save those donations for the Salvation Army and keep the disaster ones focused on disaster-type needs.

No One Wants Your Used Underwear
I’m not a germaphobe by any means, but I’m not quite sure when that puke-in-the-back-of-the-throat feeling is going to leave me after reaching into a bag and pulling out someone’s worn underwear. And not just one pair, but three. (In a place with no running water and no soap with which to scrub my hands like Lady Macbeth trying to get the blood out.) The sad truth: the person’s heart was in the right place.  Underwear is desperately needed, perhaps more than any other item of clothing.  But it’s new underwear that’s needed, as in still in the plastic packaging. And new socks.  I nearly cried when I opened a bag to find it filled with thick socks, the tags still on them. They were gone almost as soon as they hit the bin.

A Little Money Goes a Long Way
I asked Matt who is overseeing the volunteer efforts at the arena what they needed most, and the items he listed are the kind you’ll need to spend a little money on to give: things to help light homes (batteries, flashlights, lanterns, candles and matches); household cleaning supplies; and personal hygiene products, like soap, shaving cream, shampoo, and toothbrushes.  Stocking up on these things can get expensive, but luckily New York City, especially its outer boroughs, is blessed with these beautiful things called 99 Cent Stores. We stopped in one on our way to Long Beach and for $50 were able to get a decent supply of diapers, baby wipes, cleaning supplies, garbage bags, maxi pads, hand sanitizer and socks. [Ed. Note: You can find similar items at cheap supermarket chains like Associated for the same price.] 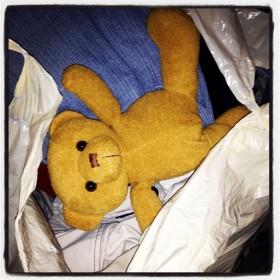 When we left the arena, it was twice as full as when we’d entered it. Tables were stacked with soup and cereal. Kids shoes were getting sorted from men’s boots. A whole bleacher was piled high with bags of blankets. And the bucket brigade was still hard at work, unloading vans of donations. Driving home through the darkening streets, past houses marked with water lines as high as their garage doors and curb after curb littered with broken boards and ruined mattresses, the debris of the devastated lives within, I couldn’t help but think how much each and every thirty-gallon bag of donation was needed. So keep them coming, New York. Just please use that sharpie.

Volunteers are needed at Long Beach all week. To volunteer to sort and distribute donations, head to The City of Long Beach Ice Arena at the end of Magnolia Boulevard by W Pine Street.  They open at 9:00 a.m.  To learn other ways to volunteer, go to the information booth outside Long Beach City Hall at 1 W Chester Street.

Note: Brooklyn Based will also be making a run to the Rockaways this week. If you want to donate goods (or money to buy goods), get in touch.

Leave a Reply to Ruth Gallogly