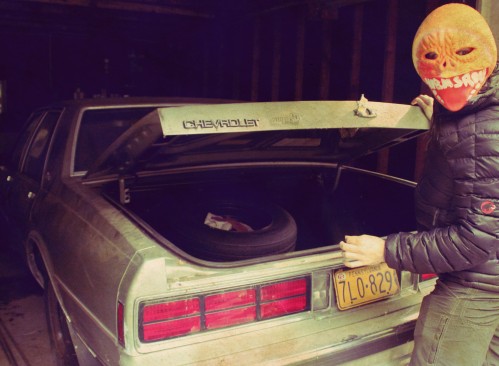 Eccentric and mysterious best describe the Pittsburgh electronic group Black Moth Super Rainbow to the uninitiated. First, the group is led by a guy named Tobacco (real name Thomas Fec), and its members have equally unusual pseudonyms such as Bullsmear and Seven Fields of Aphelion. Second, the band has developed a reputation through masks—speaking of which, as incentive to donate to its Kickstarter page, Black Moth Super Rainbow offered a gnarly-looking orange latex mask with music pre-installed inside for $70 or more (sorry folks, those masks are already sold out).  And it also helps that one of Black Moth Super Rainbow’s fans is Eric Wareheim (of the comedy duo Tim and Eric), who even took the time to record a  video tour introduction for the band.

The peculiarity of the group’s persona carries over into the psychedelic music on the excellent Cobra Juicy, the album that came about from the Kickstarter project and the follow-up to 2009’s somewhat subdued Eating Us–a record that, according to the press release for Cobra Juicy, appeared “soft.”  Cobra Juicy sounds tougher–it’s full of sparkling synth  and electronically-treated vocals. The opening cut “Windshield Smasher” melds disco and electronic rock that evokes the Chemical Brothers;  “Gangs in the Garden” is pulsating synth-pop reminiscent of a Giorgio Mordoer production; the semi-ballad  “Dreamsicle Bombs” sounds like it could be a track on the next Goldfrapp record; and “We Burn” is a fusion of electronic and blues styles a la Beck.

While the album is all over the place stylistically and sonically, it’s also grounded with its catchy melodies and grooves. With that in mind, Black Moth Super Rainbow’s show at Music Hall of Williamsburg tomorrow should be a good, weird time.