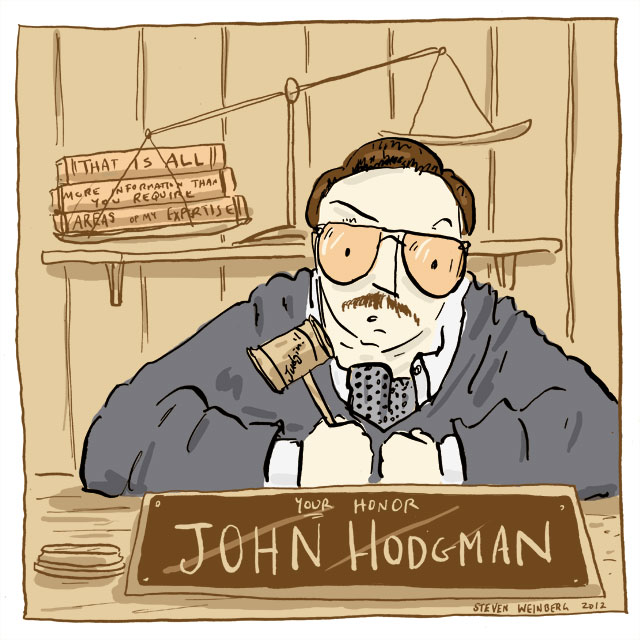 In our series, Five Questions, One Drawing, artist Steven Weinberg interviews and draws a well known Brooklynite each month. Today we present to you John Hodgman, author of Areas of My Expertise, humorist, star of the Judge John Hodgman podcast, Park Slope resident and arbiter of us all. He will perform at The Bell House on Dec. 21.

When you leave Brooklyn and come back what’s the first thing you do?

I do what everyone does, or should: strip naked. Then I put those clothes and my luggage into the bathtub until I can run everything through the hot dryer to make sure I did not pick up any bedbugs. Then I spray down my suitcase with rubbing alcohol for the same reason (but also the smell). If you spend any amount of time staying in hotels, even nice ones, you should do this. Unless you like bedbugs.

The difference is that, because I am doing it in Brooklyn, I feel happy to be home. Though I lived in Manhattan for 13 years and loved it, I never could relax there. Everything felt a little too narrow: the streets, the sidewalks. In one apartment building the walls were barely the width of my outstretched elbows, and they were painted flesh pink, so every morning, going to work, it felt like you were being born. It’s not like I grew up on the prairie, but I constantly felt like I was about to be hit on the shoulders. Whereas Brooklyn is just that much broader, with wider buildings and boulevards and blue patches of sky that remind me more of my native Brookline, MA.

Also, I like towns that begin with the letters BROOKL.

You commute by train/bike/car/walk/other? Why?

My office is across the street from my home, so I very rarely drive. When I go into Manhattan, I take the subway. I used to wonder why the F train followed such a crazed and seemingly random path. I didn’t understand that it was built to connect all of the very specific, few, non-Slopish places I need to go in the world: Clover Club, Shopsin’s, The Zigfeld Theater, and the offices of my doctor on the Upper East Side.

How many different places have you lived in Brooklyn? Which is your favorite?

What’s your ideal Brooklyn night out?

This is the two-year anniversary since I saw the Mountain Goats at the Bell House and John Darnielle covered Ace of Base’s “I Saw The Sign.” That I am now within walking distance of some of the best comedy and live music in the city was not my expectation when I began my middle age here.

Brooklyn Borough President Marty Markowitz is nearing the end of his third and final term of office. As one of Brooklyn’s most prominent experts and extra-legal judges, can we expect a campaign in 2013? What would be on your platform? How would you eviscerate your rivals? Any scandals to look forward to?

The many, many photographs of me de-bed-bugging my luggage in the nude that are all over the internet prohibit me from seeking any public office. May we begin a draft Jonathan Coulton movement? It’s time that Brooklyn had a feral president.