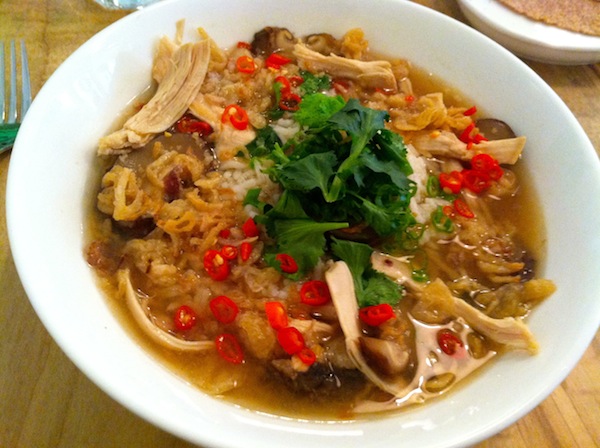 “Yeah…most people end up picking them out,” says the waiter, glancing down at fiery red bird’s eye chilies floating on top of my soto ayam soup. I had responded confidently when he asked whether I could handle spicy. After all, we’re at Selamat Pagi, a new Balinese restaurant in Greenpoint from the team behind Van Leeuwen Artisan Ice Cream–folks best known for serving scoops of twee flavors like nectarine sorbet and currants-and-cream out of vintage-y ice cream trucks. I doubted they were serving up anything that could make my nose run and eyes water.

Fans of authentic Asian cooking will be glad to know that the Van Leeuwens’ pedigree with Indonesian fare is in fact, pretty legit. Co-owner Ben Van Leeuwen and partner Laura O’Neill have traveled to Bali extensively (O’Neil is from nearby Australia) and fell in love with the cuisine while traveling there.

“If you look at a recipe, Balinese food will seem very similar to Thai food,” says Van Leeuwen. “But it’s much lighter, with less fish sauce, so you taste the individual flavors more–the fresh tumeric, the lemongrass and Balinese long peppers”–a black peppercorn prized for its uniquely floral, pepper-y kick.

The duo, along with their third partner, Ben’s brother Peter, hired Sophia Loch, who had been the pastry chef at Van Leeuwen’s ice cream stores, to oversee the kitchen at Selamat Pagi. The restaurant,  which appears to be Brooklyn’s first focusing specifically on Balinese fare, opened this fall in Greenpoint near McGolrick Park.

Loch, of Cambodian descent, puts some original spins on traditional Balinese dishes. A bluefish on the dinner menu is served in the Balinese style, covered in black pepper, tumeric, coriander and two sambal sauces–one tomato-based and one steeped in lemongrass and chilies. The fish itself is first caramelized in palm sugar, a method learned from Loch’s Cambodian grandmother.

“Selamat Pagi” means “good morning,” and in addition to dinner the restaurant is open for brunch Tuesday though Sunday, serving dishes like nasi goreng–Bali-style fried rice with prawn crackers, cucumbers and a sunnyside-up egg, and the soto ayam soup mentioned above. Those bird’s eye chilies are pickled in vinegar and palm sugar, toning their heat down just enough so that you feel the fire, but don’t have to put your fork down (I’ll admit, in the end I left a few at the bottom of my bowl). Mustard greens, cilantro and crispy fried shallots balance the flavor on top, while copious white rice, biodynamic chicken and meaty mushrooms soak it up. Options for cleansing your fiery palate at the end include fresh ginger-lemongrass tea, coffee from Toby’s Estate, and of course, Van Leeuwen ice cream.

Leave a Reply to cat