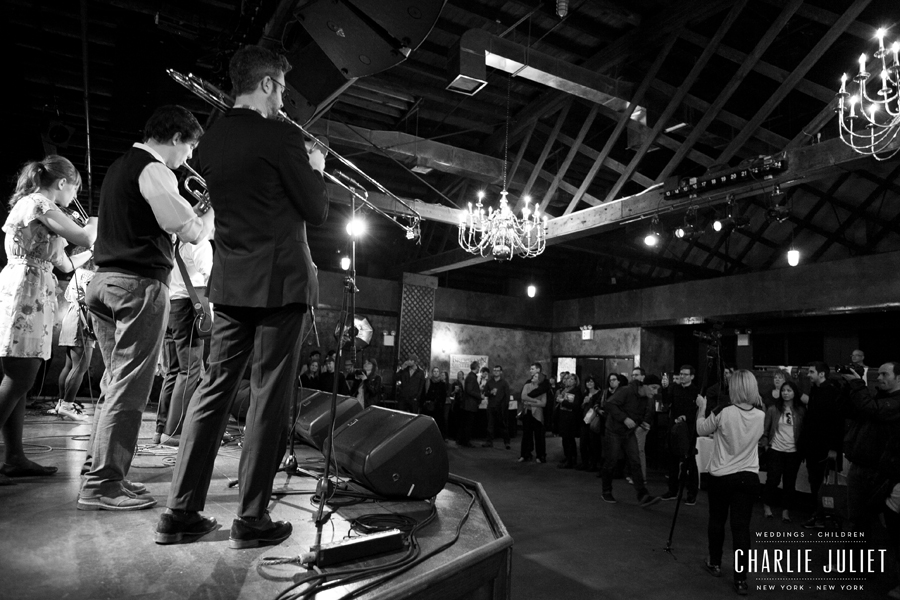 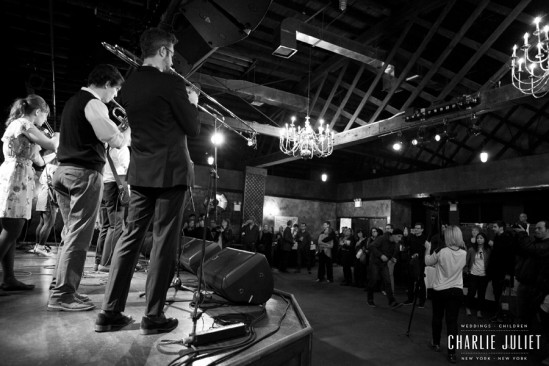 Part of what sets Wedding Crashers apart from other wedding fairs is that it gives couples a chance to hear multiple wedding bands perform live on stage, in one place, instead of running around town to scope out bands separately.

This year at The Bell House we featured 10 live bands who sound so good, no one would mistake any one of them for a cheesy, Adam Sandler-style “wedding band.” Our showcase is filled with gigging musicians who’ve worked with big names like David Byrne or Andrew Bird and whose bands you pay to hear perform at venues like Bowery Ballroom, (Le) Poisson Rouge, and Rockwood Music Hall. Often called anti-wedding bands, they guarantee that your guests will be talking about the music long after the night ends.

Below is the lineup of live bands we heard at Wedding Crashers on March 10, complete with mp3s if you missed them.

The Prenups
“I plan on getting married at least once a year just so I can have a wedding where The Prenups are playing.”–Will Dailey (CBS Recording Artist) The Prenups are a 5-piece guitar-driven rock band formed by friends and members of successful indie bands. They’re gritty and soulful, they lean on 60s and 70s soul and rock, and they pack the dance floor. (Download their cover of “Let’s Spend The Night Together“)

MIXTAPE: a cover band for hipsters
MIXTAPE: a cover band for hipsters is not your parents’ wedding band. They say NO to the BeeGees and YES to the Black Keys and put a fresh face on your favorite mixtape songs, like the ones you made for each other when you started dating. Flexible, affordable, fun, and conservatory trained to boot, MIXTAPE can tack on classical for your ceremony and jazz for your cocktail hour! (Check out their video montage here»)

Baby Soda Jazz Band
“With your eyes closed, you could have been on Bourbon Street.”–NY Daily News.  Baby Soda is an acoustic, energetic band that sings and swings. Their classic sound is rooted in Prohibition-era swing, New Orleans jazz, and a southern gospel repertoire. At weddings, their joyful performances resonate with all guests young and old. Hiring Baby Soda ensures that the mood in the room will be festive and fun. (Download their cover of “Tiger Rag“)

Red Hook Orchestra
Formed in 2009 by the bandleaders of Dexter Lake Club Band, Red Hook Orchestra has quickly become one of New York City’s most popular event bands.  Made up of Brookyln’s most sought-after musicians, the members of Red Hook Orchestra have recorded, and performed with Regina Spektor, Bill Withers, and Air, amongst many others, and the band has performed at the top venues in New York and elsewhere including the Bowery Ballroom, Bowery Hotel, Steiner Studios, the Rock and Roll Marathon in Prospect Park, and Brooklyn Botanic Gardens, Prospect Park, Tribeca Rooftop, and the Montreal Science Center. (Download their cover of “American Girl”) 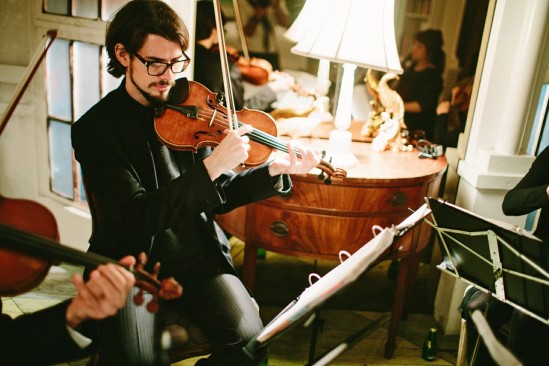 Tribute String Quartet: Classical on the outside, rock, indie pop and new wave at heart.

Tribute String Quartet
Tribute String Quartet is a rock and pop string quartet perfect for couples seeking unique music for their wedding. The group’s musical interpretations of artists like Hall ‘N’ Oates, Elton John, Sam Cooke, and Journey make them stand out from the crowd of string quartets.  Their ability to create custom arrangements of your favorite songs is unequaled in the crowded world of wedding string groups. It’s like having your own personal mini orchestra for your wedding. (Download their cover of “Bennie & The Jets“)

Kinky Spigot and The Welders
Kinky Spigot and the Welders is an event band distinctly unlike the rest of the competition. The band began some years ago as a group of friends playing classic soul covers for parties at hip-and-with-it Wesleyan University. They later decided to keep it going as an event and wedding band, but with a unique philosophy: to make each wedding the best concert of couples’ lives. Kinky Spigot and the Welders ditches the tired wedding song clichés, instead bringing a unique repertoire and style ranging from classic ’60s soul to ’70s synth funk, ’90s R&B to indie rock. The other part of the band’s philosophy is to have fresh takes on dance-floor classics – the band might take a pop-dance hit by Rihanna and throw a searing horn-line on it. Most importantly, Kinky Spigot and the Welders plays their heart out to deliver a high-energy, floor-stomping, sweat-through-your-tuxedo, all-night-long dance party like few others. Again and again, clients say: “That was like nothing else I’ve ever seen or heard at a wedding.”(Download a medley of Kinky Spigot’s tunes)

The Loyales
“The Loyales were the best wedding band ever because they weren’t a wedding band. They were just a really great band.” -Joel Stein, Time Magazine. Brooklyn cover band The Loyales has an unparalleled repertoire of rare classics. They offer couples a multitude of musical genre options (with the exception of contemporary Top 40). Lead singer and bandleader, Milton, maintains his warm sound while easily shifting from rare oldies, to classic rock, to soul, or even country. (Download their cover of “Push Pull“)

Jenny Dee & The Deelinquents
Hiring Jenny Dee and The Deelinquents ensures a full room of energy. Their brand of classic songs is perfectly suited for the multi-generational crowd at weddings. Available as a 6 to 12-piece band, Jenny and her crew throw down on classics by The Ronettes, The Crystals, Ike & Tina, with some Beatles, Blondie, and even some re-imagined Led Zeppelin, if you like, for good measure. (Download “Don’t Boom Boom,” Lilian Hale Cover)

Empire Beats
Empire Beats is a five to nine piece rhythm band that plays an expanding book of Rock/Roll&Soul Music, familiar and forgotten hits from the past and new grooves from right now. Their energetic sets recall Rhythm & Blues showcases of another era, it’s great music that gets every generation up dancing. Not only can they pare down for instrumental cocktail and ceremony music, with the addition of their bawdy after-hours burlesque show, the Juke Joint Revue, any event is elevated to an extravaganza as Empire Beats delivers an array of musical panache, sass, and class from start to finish. (Hear select Empire Beats songs like “Unchain My Heart”)

The Affections
The rare wedding band that is actually a band, The Affections are good friends and frequent musical cohorts within the Brooklyn music scene. They dig into faithful renditions of fun songs by your favorite bands–as long as your favorite bands aren’t The Black Eyed Peas, The Kooks, or that one who wrote “Macarena.” Members of The Affections have worked with some of music’s most respected artists, including David Byrne, Andrew Bird, Lauren Hill, Sufjan Stevens, Norah Jones, Marianne Faithfull, Yo Yo Ma, Suzanne Vega, Robert Glasper Trio, Jose James, and Sir Paul McCartney.  (Download their cover of “Wooly Booly,” Sam The Sham and The Pharoahs cover)