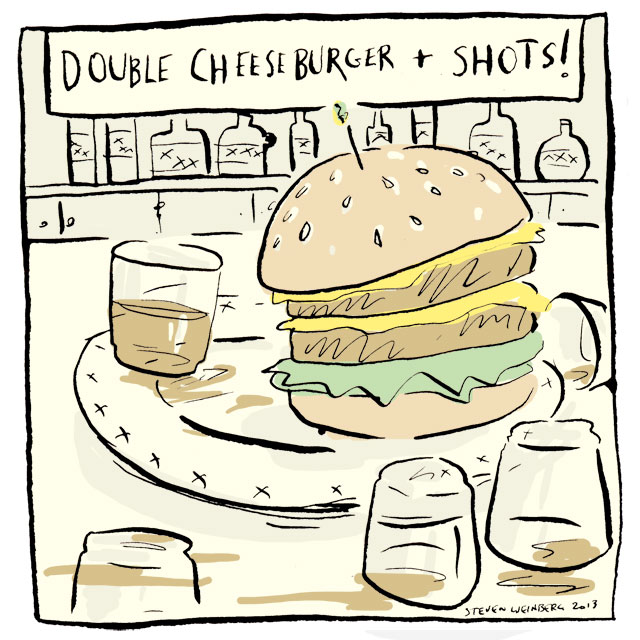 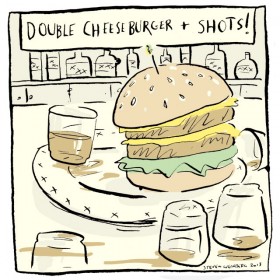 Newly reopened post-Hurricane Sandy, this waterfront Sheepshead Bay institution attracts a diverse neighborhood crowd. Outside it’s all shiny chrome, inside it’s all ocean-like blues and greens and comfy booths. Stick with the classics on the encyclopedic menu, like the surprisingly juicy hamburgers, pancakes, omelets, or simple Greek dishes. Skip the entress and the more ambitious dishes.

El Greco also has the rare-for-a-diner advantage of a full liquor license, which means if you haven’t wandered in hungover, you can get a spiked coffee, a beer even some whiskey. Whatever your physical or mental state, you should definitely get an egg cream, a classic New York drink that doesn’t show up on menus often enough anymore. It will taste even better with the backdrop of Sheepshead Bay, the glitzy houses of Manhattan Beach across the water and conversations in multiple languages swirling around you. In balmy months the action moves outside to their spacious patio, with even better waterfront views and people watching. Pancakes taste better when families are arguing in Russian behind you, while you watch the sun rise. –Illana Novick 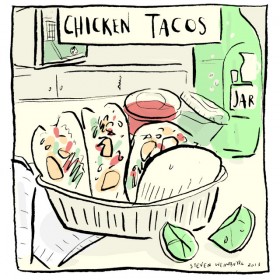 The very name of the neighborhood where Girasol is located is up for debate. Purists call it Sunset Park. Apple Maps and Wikipedia, dub the area bounded by 4th Avenue, 8th Avenue, the Prospect Expressway and 36th Street “Greenwood Heights.” And pretty much just above the corner of 21st Street and 5th Avenue, where Girasol is located, Google Maps dubs the area “South Slope.” More to the point, that’s the name the least likely to inspire a confounded expression.

Girasol Bakery goes beyond its self-professed panaderia status (although the sign certainly does feature a girasol, or sunflower). The true gems are its traditional Mexican entrees, made to order. The baked goods, encompassing traditional Mexican favorites such as pan dulce, as well as gaping cupcakes shaped and decorated like the Cookie Monster, priced in the 75-cent to $1.50-range, make for a dirt cheap 9am sugar rush on the way to work—or a 4am bid to stave off a hangover.

Stumble in at 2am, shake off that gin-and-tonic stupor and order a plate of two or three chicken tacos. Priced at $2.50 per taco, you can barely buy groceries for the same price. Saddle up in one of the high bar stools at the counter and take in a Norteño cover of “Comfortably Numb” while you watch the tomatoes and lettuce chopped with abandon and the chicken sizzle. The complimentary tub of piquant salsa verde will reawaken the senses and a bottle of sangria soda will refresh the spirit. –Anne Szustek 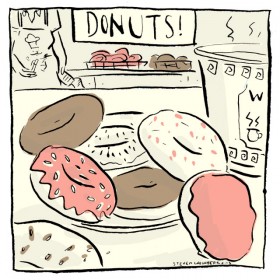 I’ve probably had my best nights (and meals) inside of the 7th Ave Donuts between the hours of 2am and 5am. It’ll be full of a typically volatile mix of drunks, cops taking breaks, old people inexplicably awake, and inevitably that one couple having the break-up talk. It’s just a lot of energy. And the bacon cheeseburger deluxe isn’t half bad either.

Speaking of their menu, in terms of process-driven-foods I’d have to recommend a bowl of their chili. They keep it in this odd industrial steel filing cabinet. There’s something so satisfying about watching the waitress spoon chili out of a device that would otherwise house invoices. They also make a mean grilled cheese. And, as an alternative to the burger, I sometimes get the turkey club. It’s a hearty end to a night, though the course toasted bread always cuts up my drunken mouth. (My fault, not theirs.)

Not to be forgotten, there are the donuts. Old fashioned, crullers, glazed, they are all amazing and actually fresh baked every day. I high recommend cozying up to the wonderful waitress Nadia. If you’re in with her, bags upon bags of free donuts may begin follow you out the door.
–Steven Weinberg 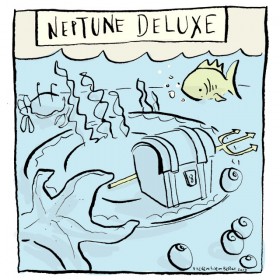 In order to attract potential residents, the management of Jewish Hospital apartment complex between Prospect and St. Mark’s Place in Crown Heights promised that the complex would include a grocery store and a coffee shop. These amenities were a long time in coming, so long that some residents of the complex gave up and turned the coffee shop site (on the corner of St. Marks and Classon Avenue), into a Tiny Urban Park. They probably should have started a little earlier, though–three months after they began planting, the TUP was plowed under, to make way for the Neptune Diner II.

The second outpost of a venerable Astoria classic, Neptune Diner II is new to Crown Heights but old school–yes, the owner can return your greeting in Greek. Along with the nearby Compare Foods supermarket (also a recent addition), Neptune II is the closest basic food source for several hundred young, hungry people of the kind who stay out late, or just order in. Located on a raised platform several feet above street level, Neptune II has a vibe somewhere between campus coffee shop and classic outer borough Greek diner.

The menu is exactly what you’d expect, as is the cheery blue and white decor. Moussaka, grilled cheese and omelets have everyone covered. The food is solid but unexciting.

The clientele is a mix, but all casually dressed. This is not the place for your best outfit, it’s just the place for breakfast. Or lunch. Or late night pancakes. It’s not perfect, but it doesn’t ask you to be either. –Katya Schapiro 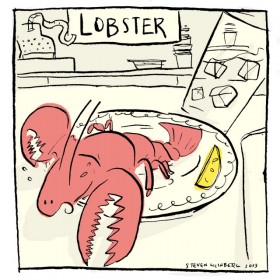 Kellogg’s Diner is Williamsburg’s version of every suburb’s Applebee’s, except it doesn’t have freaky foods like boneless Buffalo wings (Where do the bones go? How do they get them out?) and it’s open 24/7.

Whether you’re having a post-drinking binge sober-up session, or a mid-day meal with your family, order a grilled Swiss cheese with ham and tomato and a cup of coffee with a side of fries. Don’t order chicken scarpariello or filet mignon. Even though the floor to ceiling windows allow Kellogg’s to fit into the now developed Williamsburg landscape, remember–it’s a diner. If you want to order the lobster dinner and leave a one-star Yelp review because that lobster wasn’t very good, that says a lot more about you than it does about Kellogg’s. Even back when they allowed you to pick a lobster from a tank by the entrance people didn’t dare go near it, much less order it.

Back in 2008, for its 35th anniversary, Kellogg’s shut down for renovations. You’ll now find a fancy neon sign in place of the old plain billboard looking sign. There’s no longer a mini-bodega inside where you can buy cigarettes and M&M’s. Instead, there are floor-to-ceiling windows, a fancier bathroom, more space (including very spacious booths) and even a brunch menu.

Despite the changes you will not find an option for organic grass-fed armadillo and an open mic night–and that’s great because sometimes you just want a burger and a place to escape to without all the mumbo-jumbo. –Jay Honstetter 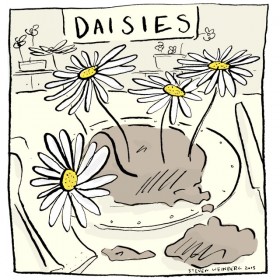 Located mere steps from the transit mecca that is the 4th Avenue/9th Street F/G/R stop—as well as the B61 and B63, the only two bus lines that can be tracked via the interwebs, Park Slope 24-hour spot Daisey’s Diner is well-situated to deal with incoming hunger pangs from numerous corners of Brooklyn.

Equally as versatile is its menu. Like its kindred Greek diners in large metropolises all America over, Daisey’s offers a bound multi-page menu lined with standard breakfast favorites such as Belgian waffles ($4.95 for plain or $7.95 for the “waffle sandae [sic],” topped with chocolate, vanilla or strawberry ice cream, walnuts and whipped cream).

The burger plank of the diner food pyramid gets its due, with one-third and one-half-pound patty options. The patty melt, specifically the grilled rye bread, glistening with butter, is worthy of particular mention. The hot-open sandwich category goes above and beyond the usual turkey and roast beef options to include pastrami, brisket and corned beef. All $11.95 for best combination of white bread, mashed potato, meat and gravy money can buy.
It does come with a salad.

Healthy types can go for fish or one of the “Mediterranean specialties,” such as eggplant rollatini, with pasta and choice of soup or salad.

By this point, it should be clear that the salad is probably the only thing passable for gluten-free or carb-free folk. But what did you expect? –Anne Szustek 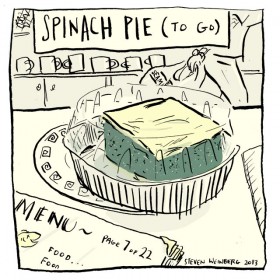 Walk into Fifth Avenue Diner and you’ll find the easygoing atmosphere that diner-lovers crave. Its brown booths and row of stools by the counter are frequented by regulars and stoppers-by alike. The servers are observant and friendly, checking in without being over-present. The menu is vast, just tons and tons of diner food- many permutations of eggs, French toast, bacon, and sausages, and loads of other options as well: triple decker club sandwiches and carving board hot sandwiches, wraps, pastas, paninis, classic chicken entrees such as chicken marsala, steak and chops if you get a late London broil craving (with onion rings!), and seafood entrees like broiled salmon or fried shrimp. The dessert list is also seemingly endless with lemon meringue pie, cheesecake, red velvet cake and many other assorted cakes and puddings. Milkshakes and smoothies as well as beer and wine are also served.

Locals stop by for spinach pies to go–it’s no wonder since they’re made by hand by the owner’s Greek mother. (She also makes the baklava). In addition to its homemade Greek specialities, Fifth Avenue also serves homemade soups like beef barley, chicken noodle, and cream of broccoli. A back room is available for parties. –Roseanne Pereira 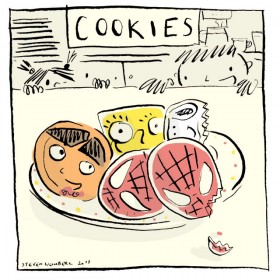 Grand Morelos is a Mexican-American diner on Grand Street, just a few blocks from the Graham Avenue L stop in Williamsburg. If you’re in the mood for diner staples like omelettes, hamburgers, or grilled cheese, they’ve got you covered–but you should really be ordering from the Mexican side of the menu, which is fresher and tastier than you’d expect from a late-night joint. No San Loco bright yellow cheese here, much as we love San Loco. If you can’t decide what to order, a good bet is one of their Mexican combos: tostada + burrito, taco + enchilada, taco + tostada or enchilada + tostada, all served with rice and beans and all under $10. Or anything that comes with green sauce.

They also boast a large bakery display case, with almost any sort of baked good you could want. And mercifully, for the still-drunk or already-hungover, their lighting is relatively low-key, especially compared to the blazing fluorescents at their Williamsburg neighbors Kellogg’s. Oh, did we mention their menu includes Heineken and Mexican beer? On your way out, check out the cakes in the front, whose themes include Catholicism, Disney princesses and Captain Jack Sparrow.
–Anastasia Friscia

All illustrations by Steven Weinberg.