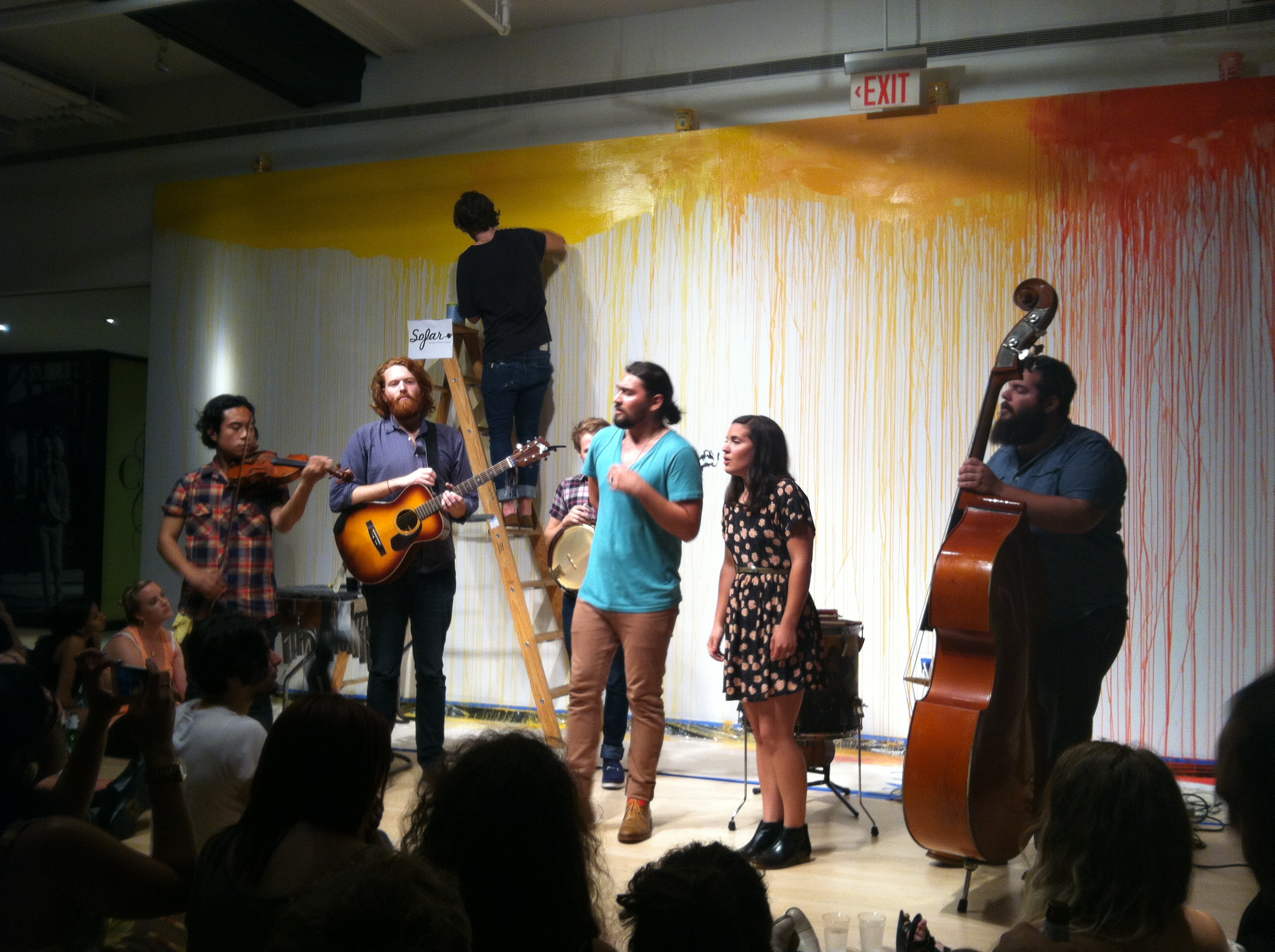 Seryn, the last band of the night, earned a standing ovation and calls for more music from the audience. Photo: Gabrielle Sierra

The idea of Sofar Sounds is simple; gather musicians in a music lover’s apartment or gallery, invite fans who are down to hear a range of sounds and see what happens. Entry is free, but attendees must RSVP quickly to get onto the guest list, and an email is sent out the day of the show confirming the secret pop-up destination. The next two New York dates are June 13 and 25, so sign-up now for the opportunity to RSVP when the time comes.

We checked out a Sofar performance a few weeks back, to see what the scene was like. On, Tuesday, May 21 Sofar held court in the Cole Haan offices on 18th Street. The space, laid out similarly to a large apartment, was still intimate, creating a feeling of hominess through couch seating, floor pillows and warm lighting. The crowd spread comfortably around what amounted to the Cole Haan living room.

The Cole Haan office made for a spacious living room. Photo: Gabrielle Sierra

Jodie Belman, co-creator of Sofar Sounds, welcomed us all and introduced the event, charming the audience with her passion for the music and her British accent. She encouraged the crowd to join the grassroots movement behind Sofar, listening, enjoying, and supporting the up-and-coming artists we would see over the course of the evening.

Beaty Heart kicked off the event with their indie-alternative vibe. The group performed about three or four songs, hitting notes that were similar to that of Arcade Fire and Vampire Weekend. The three musicians played with little equipment and no microphones, a trend that would continue throughout the night.

Next up was Aabaraki, a sort of R&B-jazzy-rap band, mixing it up completely from Beaty Heart. The audience responded well to the group, laughing when the lyrics were funny and snapping and clapping and singing along when they knew the words.

Topaz Jones, a young rapper, made a surprise appearance with his band, performing one song before leaving the floor to Firehorse’s Leah Siegel. Playing solo, Siegel was captivating with her sultry voice and electric guitar.

While all of these groups and artists were incredible, it was the final group, Seryn, that brought the house down. This band of folk musicians from Denton, Texas brought actual tears to some audience members’ eyes with their incredible harmonies, and layered playing of guitars, viola, ukulele, bass and banjo. Many sections of the songs were sung acoustically, employing heart-squeezing harmonies in place of background music. At the end of Seryn’s set the audience stood in applause and begged for another song, and, luckily for us, they complied.

Joe Miller, an artist, spent the evening painting a large white wall behind the performers, transforming the blank canvas into a series of yellow, red, and orange swipes and drips.

If this edition of Sofar Sounds represents the usual level of talent and ability of the artists, as well as the low-key, friendly, and passionate vibe of the audience, I may well end up a regular. Sign up now and check it out for yourself.