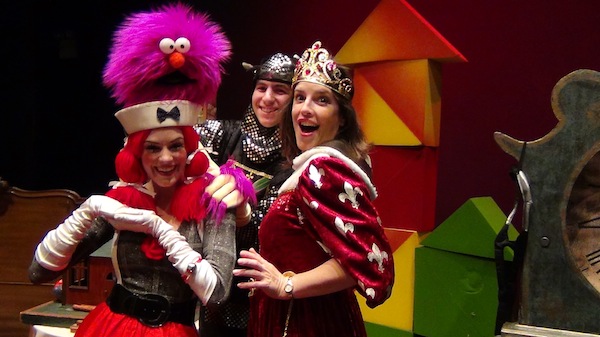 The Toy Museum of NY trots out its collection on stage, with the help of live, life-size “dolls.”

If you are anything like me, The Toy Museum of NY conjures up images of dusty attic remnants, creepy baby dolls and Billy Bob Thornton’s fear of antiques. Last year, the museum moved to a new location on Smith Street and I regretted that we had never visited. Today I found out it’s actually a thoroughly modern museum.

In 2010, the museum’s founder, Marlene Hochman, created a theater component to accompany the existing collection of vintage toys. Instead of just viewing old toys, this is more like a “live museum” where the viewer (recommended for ages three and up) actively participates in a show. Tickets can usually be bought right from the website (although I had better luck calling directly) for either the puppet show or the live theater performances–which is the only way to see the collection of toys. My son and I booked tickets for “The History of Toys: 1880’s- 1980’s” which was held at Roulette performance space in Boerum Hill.  (Shows are also held in their Smith Street location and the Brooklyn Music School in Fort Greene).

Not knowing what to expect, my son and I arrived early and took a seat by ourselves in the front row. I was hoping there would be a few others in attendance.  Minutes later the school buses arrived– and over 150 Pre-K through 2nd graders filled the room all the way to the rafters on the second floor. (The show performs mostly for NYC school trips, but anyone can get tickets.)

Songs, jokes, costumes, and of course, toys, kept the young audience members really really engaged. From the outside you would have thought we were watching a performance by comedian Louis CK from all the laughter, instead of “Queen Marlene” and her historical goods. Going back through time with stories of invention, she managed to educate us on the demanding job of doll doctors, the origin of the Teddy Bear, and the depression era ingenuity of creating Raggedy Ann from scraps of fabric.  Did you know that the invention of plastic coincided with the popularity of Barbies and GI Joe’s?  At one point a giant marionette comes to life (spoiler alert: it’s actually a live person) and starts playing with the other toys onstage. Unfortunately, she forgets where to put things back and the audience has to help her remember. The urgency of the shouts of assistance were passionate and deafening. My son was laughing so hard at one point, I actually had to check to make sure he wasn’t choking.

One thing is for darn sure: they know their audience. While I found the show to be really interesting and informative, my 3-year-old thought it was some of the best entertainment he’d ever seen. When I asked him later what his favorite part was, he recited the yo-yo joke. The take away that old toys can be still be appreciated through the ages came through loud and clear.

To continue our trek down memory lane, after the show we went across the street to Betty Bakery (448 Atlantic Avenue) which sells homemade twinkies ($2.95) and chocolate ring dings ($4.50) made right there on the premises. My son may not have realized the vintage-ness of these delicacies, but he scarfed them down just like a kid from the ‘80s.

Throughout July and August The Toy Museum of NY will have their theatre show during the week, Monday through Friday at their Smith Street location, 180 Smith St, 2nd Floor. For tickets ($10/per person) call 718-243-0820 or visit www.toymuseumny.com

Angelina Jolie’s recent reveal of her preventive double mastectomy got the country talking about breast cancer in a new light, and on Tuesday, June 11 at Congregation Beth Elohim (274 Garfield Place), Maimonides Medical Center will be discussing the faulty BRCA1 or BRCA2 genes that led to her decision and more at their freee Women’s Dinner and Symposium on Breast Health. Over complimentary dinner, Maimonides staff and physicians will discuss the role of genetics and environment in developing breast cancer; the latest advances in detection and diagnosis; proactive approaches to staying healthy; and why it is important to have a dedicated breast cancer center in Brooklyn.  Register online or call (718) 283-8832.