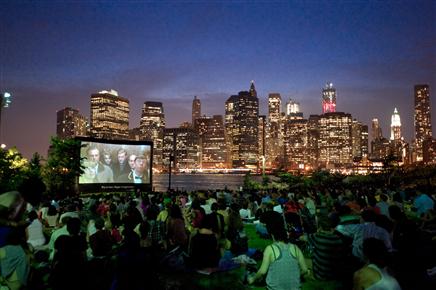 Listen up, film fanatics: dust off your ratty blanket and perfect your covert wine-drinking techniques because it’s summer, and that means free outdoor movies. For your scheduling convenience, we went ahead and compiled all of the free screenings in Brooklyn into one handy-dandy Google calendar that you can import to your own calendar with a click. Don’t worry, you can thank us later–for now, start making plans! By July, you can watch a movie under the stars almost every night of the week without spending a dime. (Pro tip: check out the individual websites for suggestions rules specific to each venue. For example, Red Hook has special food from local sponsors available for purchase and allows “quiet” dogs, although my own furball tested the limits of that rule at The Lost Boys last summer when he empathized vocally with Corey Haim’s dog as he was being tormented by a roving band of sleazy teen vampires.)

So get out there and have fun–this year, you can’t rely on the excuse that you missed all the screenings because you forgot to take note of the what, where and when. Here’s a partial lineup, though pretty much every single movie is on that Google calendar–including the new East River State Park film series, debuting June 24 with Despicable Me.

July 9
Stand By Me (1986)
The soundtrack, the ridiculous acting chops of a young River Phoenix, the scene with Lard Ass–is there anything about this movie that isn’t amazing? A classic coming-of-age story like this is the ideal candidate for an outdoor summer screening against the backdrop of the sunset and the Statue of Liberty.

July 16
Kung Fu Panda (2008)
Jack Black voicing an obese animated panda who needs to brush up on his martial arts skills = fun for the whole family.

July 23
Shaft (2000)
Okay, I thought this was the original Shaft at first, and was admittedly disappointed to realize that it’s the Samuel L. Jackson remake. To be fair, though, I’ve never seen this version and Pok Pok is one of the sponsors–what more do you need?

July 30
Strictly Ballroom (1992)
If Baz Luhrmann’s Gatsby was a little too overblown for your taste, check out his first movie, a cult classic made on a paltry $3 million budget. A love story-comedy with plenty of dancing!

August 6
Akeelah and the Bee (2006)
I’ll admit that I’m a sucker for all things National Spelling Bee-related, so a feel-good movie about a girl from a disadvantaged community in L.A. who is in training for the prestigious contest is right up my alley.

August 13
The Thing (1982)
Kurt Russell and Wilford Brimley star in this good ol’ fashioned horror flick involving alien body snatchers at a scientific research site in Antartica. Bring a blanket and someone who doesn’t mind if you grab them during the scary parts!

August 20
Caddyshack (1980)
Ahoy polloi! Where to even begin with this movie? If you can appreciate some good juvenile slapstick, you’ve probably been injecting quotes from Judge Smails and Carl the groundskeeper into your conversations for years. If you can’t, well, loosen up! Also, Red Hook Lobster Pound is sponsoring the evening, so you’ve got that going for you, which is nice.

August 27
Don’t Tell Mom the Babysitter’s Dead (1991)
The dishes are done, man! That’s the only line I remember from this movie, so it’s clearly time for a re-viewing of this comedy starring Christina Applegate and a very young Josh Charles. Apparently a lot of people feel this way, as this title won the viewers’ choice poll this year.

July 10
Can’t Hardly Wait (1998)
Sorry to be a downer, but I have to point out that this ode to the ideal high school kegger is a whopping 15 years old. Is Kenny Fisher still as funny? Did Jennifer Love Hewitt and that one Third Eye Blind song get less annoying with time? Head on down to McCarren Park for the SummerScreen kickoff to find out.

July 17
PeeWee’s Big Adventure (1985)
Picture yourself in a more innocent time, when we didn’t know anything about Paul Reubens’ theater-going proclivities and Tim Burton was green enough to do a movie about PeeWee Herman and his bike. Delightfully weird and funny.

July 31
The Goonies (1985)
The quintessential 80s adventure flick that continues to delight audiences of all ages with pirates, hidden treasure, villainous crooks, meddling kids, and the Truffle Shuffle! And don’t forget Sloth!

August 7
Speed (1994)
This summer blockbuster rocketed Sandra Bullock to the A-list, and cemented Keanu’s status as the most popular monotone actor of the day.

August 14
Audience Pick
It’s between Mallrats, The Neverending Story, High Fidelity, The Breakfast Club, The Big Lebowski, Heathers, and Scream. You can cast your vote here, but with those choices, it’s tough to go wrong.

July 11
Ferris Bueller’s Day Off (1986)
My best friend’s sister’s boyfriend’s brother’s girlfriend loves this movie–who doesn’t? Pardon my French, but you’re an asshole if you don’t head over and watch it (again) in Brooklyn Bridge Park.

July 18
Enter the Dragon (1973)
Classic Bruce Lee in one what was billed as the first American-produced martial arts spectacular. If you’re a Kung Fu fan or if you always suspected that you might be, get on board.

July 25
Willy Wonka and the Chocolate Factory (1971)
You’ve got a golden ticket to the place where the snozzberries taste like snozzberries, the gobstobbers are everlasting, and the tunnel rides can be unexpectedly terrifying. You’ve seen it a hundred times, but probably never in the middle of the park with the Manhattan skyline glittering behind the screen.

August 1
8 Mile (2002)
Remember when Eminem was on top of the world (and not yet shilling for Chrysler)? This movie will remind you, and it’s worth rewatching just for the “Lose Yourself” scene.

August 8
Roman Holiday (1953)
I have never seen this Audrey Hepburn/Gregory Peck romcom classic, but I can’t imagine that there is anything wanting in a movie about a bored princess who escapes her tightly regimented life to go gallivanting around Rome (my second favorite city) with her love interest, an American journalist.

August 15
Rocky (1976)
Sly Stallone as he will always be best known, and the greatest training sequence in film history. Everyone loves this movie–check it out again so you can remember why.

August 22
Vertigo (1958)
One of Hitchcock’s finest, Vertigo has gripping suspense and stunning performances from both Jimmy Stewart, who plays a troubled former San Francisco detective, and Kim Novak, as the mysterious woman he becomes obsessed with.

August 29
Public Vote
As always, the final movie of the SyFy series will be chosen by public vote starting August 22. The contenders are Fear & Loathing in Las Vegas, Lost in Translation, and Good Will Hunting, as well as any movies that are rained out over the course of the summer.

Rooftop Films
Various Locations
April 27-August17
*As always, Rooftop Films will be screening loads of thought-provoking and cutting-edge movies at different venues across the city this summer. This list is focused on just the free films in Brooklyn, but be sure to peruse the entire lineup here.

June 12
Interface Innovation (Short Films)
The first free show of the season will be a collection of shorts exploring the relationship between humans and the technology we have created. The selected clips include stories featuring funny and thoughtful interactions involving familiar  Twitter, Second Life, and robots. Live music by Hot Sugar will follow the screening, which takes place at Metrotech Commons.

July 8
Bending Steel
It’s fitting that this documentary about one man’s quest to become a true old-time carnival strongman will be shown on the Beach at Coney Island, just steps away from where some of his heroes made their names.

July 20
Short Term 12
The Old American Can Factory in Gowanus will host the sneak preview of this critically-acclaimed SXSW Grand Jury Award winner. The drama follows the daily lives of the staff and patients at a shelter for at-risk teens and is set to hit theaters in late August. Stick around for a Q&A with the director and an after party sponsored by Red Stripe and Bulleit.

August 2
North of South, West of East
This sounds like a one-of-a-kind movie comprised of four stories that are played out over four different screens surrounding the audience. The separate but connected plotlines highlight the American struggle, seen through the eyes of an auto-worker, an out of work actress, a cowboy and a hustling immigrant. The screening will take place at Metrotech Commons.

July 13
Dracula (1931) with the Philip Glass Ensemble
The OG Count Dracula of the silver screen, Bela Lugosi, vamps it up again in Prospect Park while Philip Glass’s original score is performed live alongside the film. Evidently, the last time the park tried this, the show was interrupted by a thunderstorm seemingly sent straight from Transylvania. The scheduled line up sounds dramatic enough for me, so hopefully skies will stay clear this time around.

August 8
Beasts of the Southern Wild (2012) with live score by Behn Zeitlin, Dan Romer, and the Wordless Music Orchestra
This was my favorite movie I saw last year, and I am beyond excited to see that breathtaking cinematography (not to mention Quvenzhane Wallis’s mind-blowing performance as Hush Puppy) again, this time in an outdoor setting with the score played by a live orchestra. I’m clearing my calendar right now–see you there!