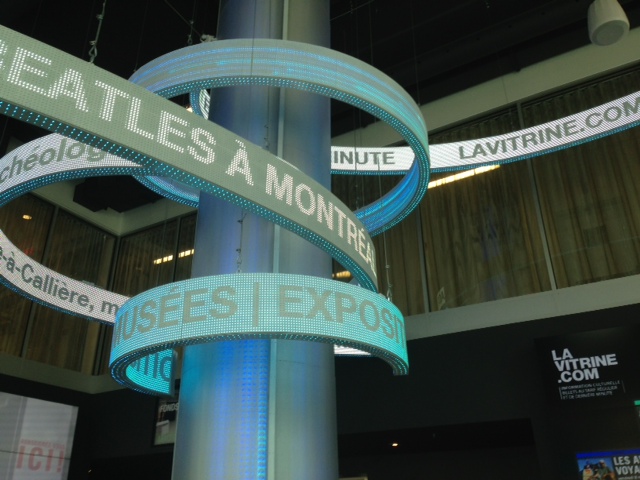 The view from Centre PHI

This is a continuation of my previous post, 72 Hours in Montréal, Part One, where I talked about the music festival scene and public art.

A few months back, I went to Montréal to explore the city with Tourisme Montréal (through a partnership with The New Yorker). It takes a lot to impress this Brooklynite, but I found striking architecture, quirky shopping, and unexpectedly fantastic dining options.

It’s hard to ignore the contrast between classical 19th century Old World architecture and the more modern buildings across Montréal. Centre PHI is a great example of an Old City building adapted for modern use. The multimedia arts space that was previously a crystal and chandelier factory now houses a movie theater, cabaret theater, recording studio, and multiple galleries and was renovated according to LEED specifications (and there was even an award-winning short film, Incendies, made in the unrenovated space). The Quartier des Spectacles is a mix of old and new, with newly-built modern structures that house the Jazz festival, the symphony, and ticketing agency 2-22, and, my favorite, SAT (The Society for Arts and Technology). 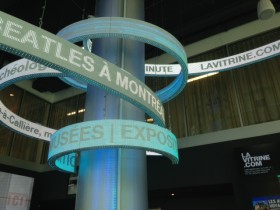 The main hall at the 2-22 building 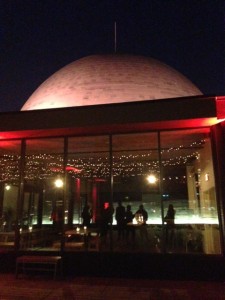 The SAT rooftop during the CULT MTL launch party

The CULT MTL launch party at SAT was a perfect intersection of digital art, local cuisine, and the alternative music scene. The band (SUUNS) was mingling with POP Montréal organizers, and local chefs were chatting with artists and photographers.  CULT is the only remaining English-language alt monthly paper in the city, launched shortly after several others shut down, so there was a celebratory mood while guests ate creations from SAT’s experimental pop-up restaurant Labo Culinaire Foodlab. Guests braved the cold on the roof to watch the light installation projected on a neighboring building, and made note to return for an interactive show in SAT’s planetarium-like domed theater.

The most non-New York experience I’ve had in some time was at the circus across the street from Cirque du Soleil’s headquarters. If you’re a lover of circus arts and looking for some unique theatrical entertainment, head straight to La TOHU. The performance we saw was dark, surprising, and naughty in a way you wouldn’t want kids to see. The building houses an annual festival of cirque performances, and an ongoing rotation of traveling and local troupes. 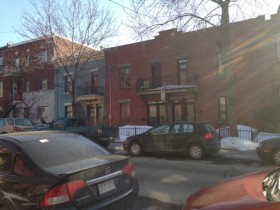 A residential street in Mile End

If you’ve read this far, you’re probably wondering when I’ll mention the food. I had no idea that Montréal is such a rising star in the food world. I was blown away by Saturday brunch at Nouveau Palais, a hip-but-accessible renovated diner in Mile End with its own DJ and nighttime cocktail scene, where we had an omelette and bacon, coffee and juice. Although we ordered a pretty basic meal, it was anything but. Chef Gita Seaton gave me the secret to her perfect eggs at the CULT MTL launch party later that night, where she was cooking for their Foodlab.

Dining is leisurely and relaxed, even when the food is not, which made me feel like I was really away from New York. Saturday brunch, not Sunday brunch, is a thing in Montréal. Even places that are hip feel un-scene-y. One of the best and most interesting meals I’ve had in recent history was dinner at Bouillon Bilk, in [what was described to me as] a fringe neighborhood that reminded me of the location of Alinea in Chicago: unassuming exterior with creative, outstanding food and wine, but without pretention. Do not miss it and definitely order the beet salad with puffed quinoa. 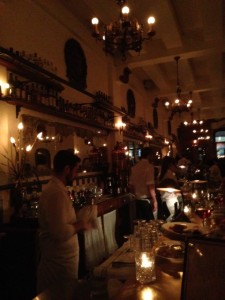 With all the impeccable French wine lists at restaurants, you have to look a bit for a spot that prides itself on cocktails. Dominion Square Tavern not only serves up outstanding Pimm’s cups, but they also make their own tonic water, which you can sip surrounded by antique coat-of-arms shields for each Canadian province.

After an amazing but exhausting weekend, we made our way back to Brooklyn via a quick flight, but not before stopping at an airport shop for bagels. The next morning I had my very first Montreal-style bagel which, I have to say, I liked much more than a typical bagel. Smaller, slightly sweet, and with a completely different consistency than other bagels I’ve had (and mostly disliked). Montréal and its food, art, and culture all surprise, even the most jaded New Yorker.

Find information for visitors via Tourisme Montréal and read more from our trip in the first post, 72 Hours in Montréal, Part One. This post is sponsored in partnership with The New Yorker and Tourisme Montréal.