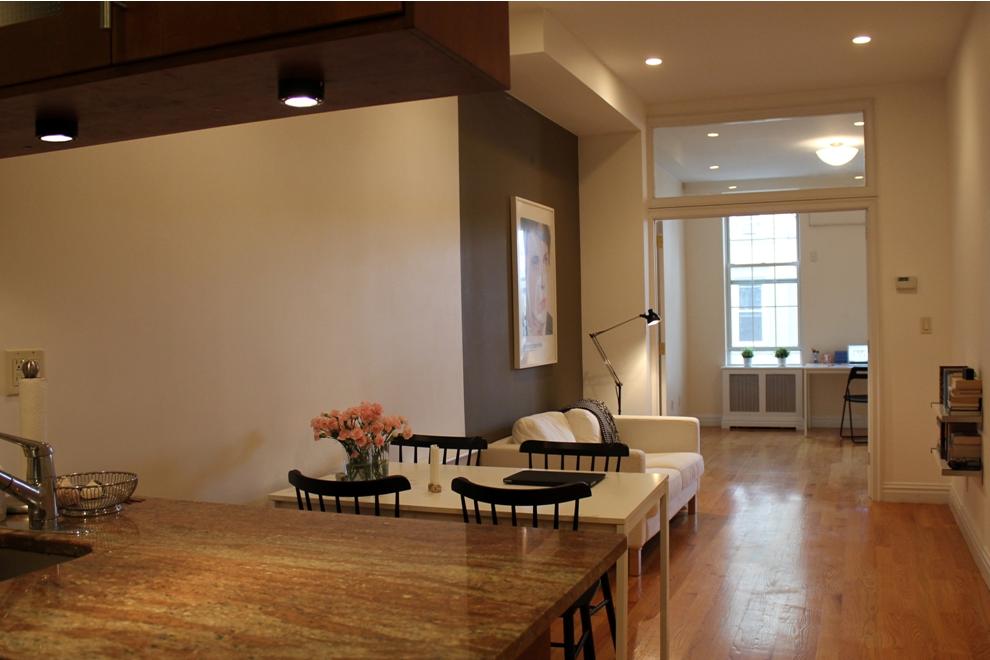 This two-bedroom apartment on Guernsey Street rents for $2850 a month, not including broker’s fee. Photo: Corcoran

Housing costs are on the rise in Brooklyn. Whether you’re renting, buying, a long-time resident or new arrival one thing that’s clear is it costs more than ever to live in Brooklyn. Even, and perhaps especially, neighborhoods that used to be considered on the fringes–think Bed-Stuy, Crown Heights and Greenpoint–are seeing steep price increases. According to a report released by MNS Real Estate last week, the average price for a one-bedroom apartment in Brooklyn as of June 2013 is about $2400.

With summer sublets ending soon, and the urge to move to a better apartment or nicer neighborhood before prices get even higher very much on renters’ minds, we decided to take a look at one way to snag a rental–brokers.

What should you expect to get for paying a broker’s fee? We asked three brokers with properties in Greenpoint, North Brooklyn’s current real estate darling, to walk us through the ins and outs of paying someone to help you find a place to live, using Greenpoint as an example.

MNS found that over the past year, the median price on a one-bedroom apartment in Greenpoint has increased from about $2600 to about $2800, and two bedrooms from about $2900 to about $3100.

If a broker asks for a cash deposit to hold the apartment, that’s a major indication that you’re working with the wrong person.

Cory Kantin, a licensed real estate broker at Corcoran’s Williamsburg office, has worked in North Brooklyn for six years. She says there’s a surge in rental interest in Greenpoint, and for good reason.

“It still has beautiful residential blocks, kind of that enclave feeling,” she says. “There’s great architecture, and it’s a little smaller than Williamsburg and I think that’s charming for people. And some people certainly are priced out of Williamsburg, but I think I’ve noticed that people are specifically saying, ‘I want to live in Greenpoint.'”

In neighborhoods like Greenpoint, where the housing stock is mostly smaller, two- and three-apartment buildings, and vacancies are low, a broker’s fee might be hard to avoid, and looking for just no-fee apartments will cut out more than half the market, Kantin says. Sometimes you can get more apartment for less money by paying a broker’s fee. Plug in your monthly rent and your fee to withfee.com, which we read about on Brokelyn last month, and it will tell you the real cost of your rent once you add and amortize the broker’s fee over the course of your lease. For example, a $2000 apartment with a broker’s fee of 15% will actually cost $2300 per month if you live there for just one year. In theory, though, you’ll stay there longer since you’re paying a broker to help you find a place you love with the amenities you want, making the fee less of a burden over time. (And given ever-rising housing prices, it makes sense to sign a two-year lease from the start anyway.)

If you’re going to pay that fee, know that at Corcoran, you can charge it to your credit card, to get those airline miles and save your cash reserves.

“A lot of people do it for the convenience of it,” says David Maundrell, president and founder of aptsandlofts.com. “We’re not a cash generation.” At aptsandlofts.com, tenants can pay the fee and the deposit on a credit card, with the rest paid at the lease signing, which helps those who might not have a full three months rent to put down up front. The deposit goes into the agency’s escrow account and is then disbursed to the landlord.

Kantin says renters who set their sights on neighborhoods with low vacancy rates, like Greenpoint, should start looking at listings a few months ahead of their move date, and brokers should show several apartments to acclimate them to the market.

“Even if you are a New Yorker, you have to say, ‘What does $2,500 get me this month in Greenpoint?’ Because you’re going to need to see 10 apartments or so to feel like, ‘Oh, this is a good value,’” she says.  “A broker can tell you because we know. But you personally as the renter have to feel that you’ve seen, and you know.”

A broker should also manage your expectations.

“If they’re looking for a price point that doesn’t match–you can’t get a two bedroom for $2,000 probably—I’ll say, ‘You know, I think that might be a little challenging, but I will show you what’s out there,'” Kantin says, “and then I let the search, when I send it to them, kind of tell that story.”

Shaun Sanchez is a Williamsburg native and a broker with Douglas Elliman Real Estate. He says that renters should tell their brokers exactly what they’re looking for, whether it be a dishwasher or a sun-drenched living room.

Before Sanchez shows clients the first listing, he makes sure they have the proper paperwork. What’s on his rental requirement checklist? A letter of employment (on company letterhead) with proof of salary, three most recent pay stubs, a current bank statement and a most recent federal tax return.

Expect a credit check. “Owners, they usually want 700 or better,” he says.

But renters without sterling credit aren’t out of luck. Guarantors can help, as long as they provide the same paperwork as the tenant and can prove income of 80 times the rent. Some landlords will accept an extra month’s rent or security deposit up front, Maundrell says. Or tenants can apply for Insurent® Lease Guaranty, which, for a standard fee of less than a month’s rent, acts as an institutional guarantor, and is like “an insurance policy for the landlord,” Maundrell says.

If your broker knows what you want, you should only see apartments that match your expectations. If you don’t, it might be time to find a new broker. A friend of Kantin’s learned this the hard way.

“He thought that apartment hunting was like bizarro land,” she says. “He asked the broker to see specific spaces and then he was in a different neighborhood and $700 dollars over his budget and he was like, ‘What are we doing here?’ And clearly the broker just had these exclusives and he just wanted to rent the apartment.”

Sanchez says if a broker asks for a cash deposit to hold the apartment, that’s a major indication that you’re working with the wrong person.

“If somebody asks you for $500 up front to hold the apartment, don’t do it,” he says. “I’ve seen situations like that and then they’ll just take the $500 and just keep it.”

He also suggests doing a background check on your broker, especially when responding to Craigslist ads.

“Check their email. If it’s a Gmail, that’s kind of funny. The company name should be in the email,” he says.

And there’s something to be said for an old-fashioned Google search. “If you can’t look someone up on the Internet, I’d say stay away from them,” he says. “Look the person up. I’m sure if they have properties in the area, they’ll pop up.”

Maundrell agrees. “Look at agent profiles and you see how many apartments they’ve rented before,” he says. “You can ask them. Don’t just send them an email. Have a call with them to feel them out. See if they give you the time on the phone. A lot of the time it’s good to go out at the beginning of the month and lay some groundwork and then you’ll find one or two that you’ll want to work with.”