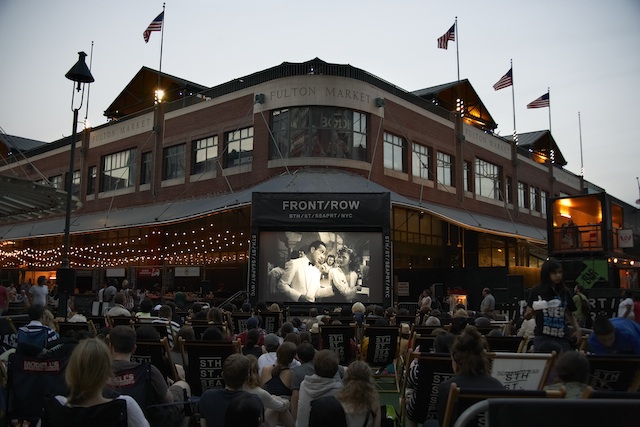 Free movies, DJ parties, Brooklyn Flea food and a bar are all putting a new spin on the South St. Seaport.

While Brooklynites may feel a bit Smorgased out, or at least happily full on Chinese BBQ porkbelly and fresh lobster rolls, the South Street Seaport, still suffering from Sandy, could use some more artisanal treats and foot traffic. Thankfully the Brooklyn Flea has brought Smorgasbar to Front Street, right near the Wall Street ferry stop, making the touristy area a lot less heinous. From 11am until 10pm each day, Asia Dog, Blue Marble Ice Cream, Brooklyn Oyster Party, Fonda, Landhaus, Milk Truck Grilled Cheese, Pizza Moto and Red Hook Lobster Pound serve reasonably priced deliciousness that you can eat at a picnic table on a quiet cobblestreet block. Of course there’s also a bar (in an old shipping container), which not only serves local beers and wines, but will add a shot of your favorite poison to the virgin Kelvin Slush Company slushies. If Governors Island is your most adventurous destination on the ferry, think of this as another place to stop. Thursday nights from 6-11pm the Brooklyn Flea has a weekly, outdoor DJ party called Seahouse at the Topsider bar on Fulton Street, and Wednesdays through Sundays the Seaport itself has programmed more DJs, free movies, and other activities, all in an effort to make the area safe for cool New Yorkers.