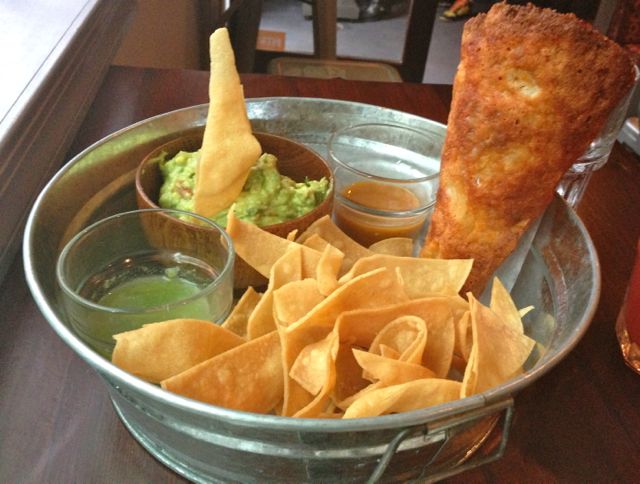 Has any restaurant ever been more tailor-made to succeed in today’s Williamsburg than Zona Rosa? The eatery, which opened last week, comes with a prime location at the corner of Metropolitan and Lorimer, chef Ivan Garcia of nearby Mesa Coyoacan and a super-hip kitchen housed in the vintage airstream trailer formerly used at 3rd Ward. Its cuisine is very of-the-moment “Mexican street fare gone high end,” with house-made (trailer-made?) tortillas and salsas, plus there’s an airy rooftop bar to boot. Basically, Zona Rosa could serve Saltines and Kool-Aid and still pack the tables every night, which means they deserve some credit for serving fare that’s pretty damn good.

The concept combines various forms of traditional street food from across Mexico, ranging from Tacos Arabes–popularized by Lebanese immigrants to the state of Puebla, and consisting of spicy marinated pork layered on an onion wheat tortilla–to Torta Ahogada, a Guadalajara speciality that takes a carnitas sandwich (braised Berkshire pork, here) and submerges it in salsa. Four types of ceviche round out the small bites options, and both guacamole and a lentil-chickpea-red-bean dip come with a giant chicharron de queso–a hefty hulk of fried cheese made for dipping in along side your chips. Of course, there are also jalapeño margaritas, plus something they call zempasuchitls, mezcal and fresh fruit cocktails that come in lime, pineapple, watermelon and tamarind.

As you might guess, these specialities don’t come at taco truck prices: $14 for a torta, $11 for three tiny tacos. (I know I have pretty much already lost this war, but am I the only Mexican food fan who is still not OK with this trend of tacos growing more and more expensive while simultaneously getting smaller and smaller?)

That gripe aside, the slow-cooked meats and savory salsas are delicious, the service friendly and the glass-backed rooftop bar about as good a summertime people-watching spot as you’re gonna get. The chances of Zona Rosa not succeeding here seem pretty slim.