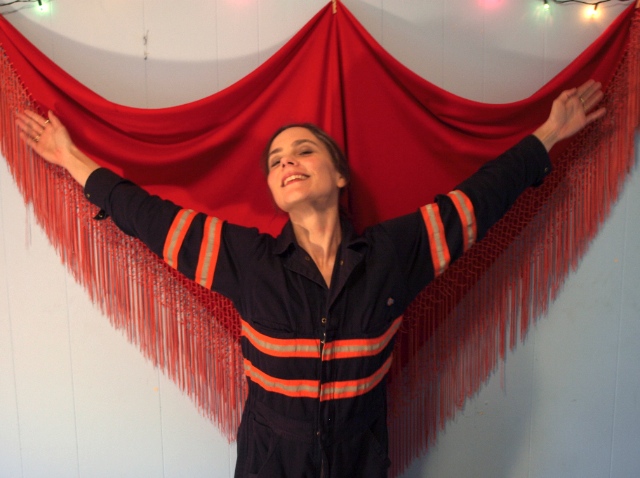 It’s not often that a writer conducting an interview gets an astrological reading from his interviewee. But that’s exactly what happened when I interviewed British singer/songwriter Emma Niblett, who records and performs as Scout Niblett. Having read that she’s into astrology, I asked her about what she thought of Gemini, which is my astrological sign.

Apart from original compositions, Emma also does a cover of the TLC song “No Scrubs,” rendered in a stark and almost bluesy manner on It’s Up to Emma.

It was as if she knew my essence, even though it was the first time we’ve ever talked to each other. Then again, it’s not surprising given her ability to penetrate the human condition through her words and compelling voice (reminiscent of Patti Smith, Sinead O’Connor and PJ Harvey.) Her latest album, It’s Up to Emma, does exactly that in a powerful and haunting manner with just guitar and drums.

Relationships gone south are the common thread of its nine tracks–“Second Chance Dreams” and “Can’t Fool Me Now” are both standouts. “Gun,” the opening track, conveys a mood of betrayal and hurt. Emma says it’s “just going through a break up, it’s kind of like the same as the other songs–it’s all about a break up or breakups in general, [and] feeling pissed off about it.”

Apart from original compositions, Emma also does a cover of the TLC song “No Scrubs,” rendered in a stark and almost bluesy manner on It’s Up to Emma. “I’ve been playing it live,” she says of her interpretation. “It just made sense for this album–it kind of fitted in with the theme of the rest of the songs to record it.”

In contrast to the very dark, lyrical nature of the music, Emma also has a whimsical side. For the music video of “Gun,” she dresses up as Snow White, walks down the streets of Portland and hangs out at a fair—she even poses for pictures with strangers. “I really wanted it to be a huge juxtaposition,” she says of the concept. “I didn’t want the video to be dark at all. I really wanted it to be quite child-like almost. So that was on purpose.”

“The whole concept was that I wanted it to be filmed randomly in downtown Portland. The day we chose to film–accidentally it was the same day as this Cinco de Mayo festival. So there was this fair ground there , which we had no idea it was going to be there. It was a very lucky accident because we got such good footage from just being at the fair ground.”

Emma’s new record marks a departure in some respects–she produced it herself, whereas Steve Albini (Nirvana, PJ Harvey) was at the helm for her previous four albums. “It was more of a decision that I made,” she says, “because I kind of had a feeling ahead of time that it wouldn’t be very straightforward in terms of it being a completely live recording. I knew there would be a lot more overdubs and tweaking things. I didn’t really feel that confident about it being a completely live recording. [With Steve] when we record there, everything’s live, even the vocals. I just figured it wasn’t going to be that kind of set up, I should probably try somewhere else.”

Experienced in playing both the guitar and drums, Emma is originally from Staffordshire in England. Her introduction to music growing up was through pop. “I would tape the Top 40 charts every Sunday and just listen to it all week,” she says. “My mom was listening to a lot of music like Blondie and the Police, she was a big fan of the Everly Brothers and the Beatles. We listened to everything that was on the charts.” She can trace her desire to be a musician back to a school assignment when she was 10. “I had to do this thing at school where you had to write who you would be when you’re 30. Mine was, ‘I’m going to be a composer.’” (laughs)

About 10 years ago, she moved to the U.S. and currently resides in Portland, Ore. In the early part of her career, Emma had been actively shopping her music to labels with no success at the time. However, an encounter with the late Jason Molina of Songs: Ohia helped her land a deal with her first record company, the indie label Secretly Canadian; she is now on Drag City. “I gave him my demo when he came to Europe on tour,” she says. “He was basically on Secretly Canadian and he passed it on to them. And they were like ‘Do you want to make an album?’ ‘Okay.’ (laughs) The irony is everyone I contacted myself I didn’t hear back from. It was an accident that they got it and they were the ones who wanted to put it out. It worked out.”

Emma is in the midst on a U.S. tour that will bring her here at Greenpoint’s Saint Vitus on Friday the 13th, then starting in October, she’ll be doing some European dates. “I’m going to go to Portugal to do a residency for about three weeks and I’m going to be basically going to be working on music,” she says. “That’s going to be really fun.”

Toward the end of our conversation,  I asked Emma if astrology guides her in the way she makes her music. “I definitely have in the past made use of astrology to work out the best potential time to do recording,” she said. Given the raw and emotional power of her music, it seems like the stars are aligned in her favor.