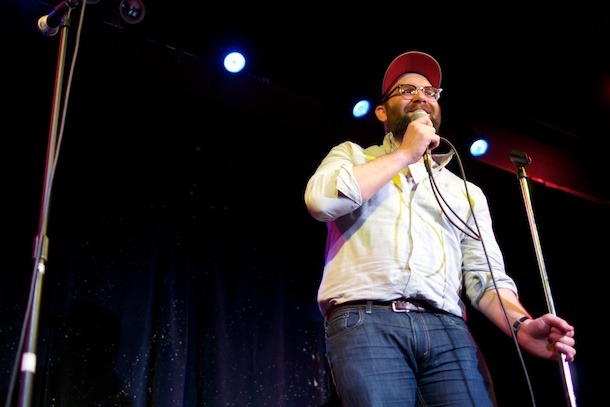 Vol.1 Brooklyn is writer, editor and publisher Jason Diamond’s brainchild. With the site, which was founded in 2009, Diamond and editor Tobias Carroll’s introduced a new kind of cohesiveness to Brooklyn books. Listing weekly events, introducing new writers with their Sunday Stories Series and throwing some of the most talked about literary events in the city, Vol.1 has become an integral factor in New York City’s book world.

Last year in a New York Times Opinionator column called The Barista’s Curse, Diamond recounted a 28-hour bus trip to NYC from Ft. Lauderdale, during which he made of list of all the publications to which he wanted to one day contribute.  Having now written for The Paris Review, Vulture, Tablet, The Awl and The New Republic to name a few, it’s safe to say that he’s made some serious progress on that list. Diamond is currently the literary editor at Flavorwire.

You are a man of many hats. For those who don’t know you, how do you describe yourself?
I’m the founder of Vol. 1 Brooklyn and Literary Editor at Flavorwire. I guess my day job is writing about books and authors I like, but I also set up a good number of events, and write about a number of other things.

Tell me the story of how Vol.1 Brooklyn began. How, if at all, does Vol.1 as it exists now differ from what you set out to make it? What does the future hold for Vol.1?
It was basically just a plot to get publishers to send me free books that I’d try and write about, but then it started to gain an audience. Eventually Tobias Carroll came on as the managing editor, and soon we realized we were producing at least an event a month, and getting a pretty large number of readers on a daily basis.

It shocks me all the time when I see how many people read the site, or when publishing people tell me that they read the site every day for the Bites, or people say the site has influence, but it is also one of the best things in the world to hear something you’ve worked on every day for five years getting that sort of love.

As for the future, we haven’t announced details, but we’re going to be launching a print wing of Vol. 1 in 2014. I’m really excited about that.

Writing for Flavorwire requires quite a bit of wit. You can’t just write another, Five Best Books post.  Can you tell me about your day to day as literary editor. What have you written for FW that you are most proud of so far?
My day to day basically starts around 5 or 6 in the morning. I start reading pretty early to get a head start on things, kinda figure out if there’s some bit of news that needs more attention than one of the posts I had initially planned to, and drink a lot of coffee. I’ve been writing for the internet for the last few years, so I have a good idea of how to do things that are different from the typical top five this or that sort of thing, but sometimes that works out for us too.

I write a few posts a day, but I really liked the review of Mike Tyson’s memoir I wrote the other day

At this point you have interviewed many legendary authors for Vol.1 and other outlets. With whom have you had your biggest fan moment?
It isn’t an author, but I got to sing “Lost in The Supermarket” with Mick Jones from The Clash during an interview. That was pretty awesome.

Tell me about the The Mingle. It’s become the hottest ticket in town.
Ryan Chapman and I both saw a need for there to be a party for all the publishing and media people we know, one where writers and editors could get drunk and just talk without much fuss. I like to see people having a good time, and we figured a no frills sort of deal would be the best way to make that happen.

You’ve become something of maestro of the Brooklyn lit world.  You organize, you connect people, you feed the scene. Is this something you’ve always had a knack for? Did growing up involved in the DIY punk world in Chicago help to prepare you, or inform your work now?  How does the punk rock scene, and the literary scene differ?
Oh yeah, 110% the punk/DIY scene taught me how to stay focused on what you want to do, to stick to a certain set of ideals, and to enjoy what it is you’re doing. Growing up, no big label wanted to put out a lot of the music I liked, and I never would have heard it if somebody was like, “I don’t care if I’m going to lose money or this doesn’t make me rich.”

Let’s talk about the lit world in Brooklyn, and the lit world at large, is there a difference?  What are some predominant trends right now?  Why is experimental fiction suddenly being embraced by the mainstream?
Nah, there isn’t. There are always writers in New York City, but the media is so hyped on Brooklyn that they’re forced to make the “Brooklyn writers” angle. That said, there are plenty of amazing writers, publishing people, bookstores, and small presses coming out of here. But some of my favorite writers don’t live anywhere near Brooklyn, and I love that.

I guess experimental fiction makes sense right now because we live in such strange and senseless times, like how Modernism made sense to people around the World Wars. Literature should be reflective of the times, but it would nice to see more of a mix of styles getting notice, and seeing that happen is encouraging.

On Nov. 19 Jason Diamond will be in conversation with Rich Cohen at WORD (126 Franklin St. in Greenpoint) beginning at 7pm to discuss Cohen’s book Monsters, about the 1985 Chicago Bears. Facebook RSVP here.