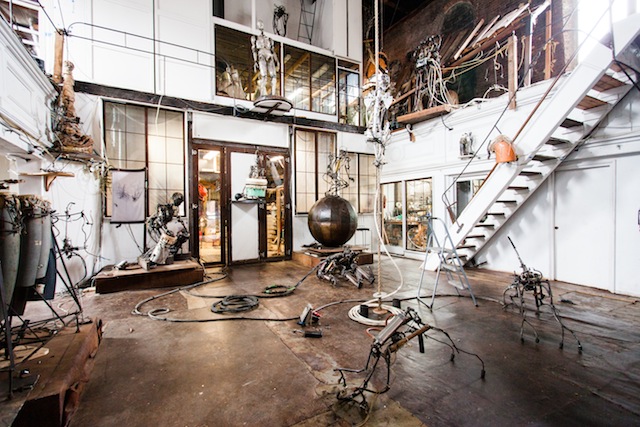 Robots at rest inside the Robotic Church. Photo: Robert Wright

Chances are, being inside a room filled with robots either excites you, or conjures up a sci-fi flick you’d rather not see. For those fascinated by man-like machines, then pencil in the last performances of The Robotic Church Saturday at 7pm and at 8pm on Sunday, both a suggested $10 donation. Housed inside artist Chico MacMurtrie’s Red Hook studio, which doubles as the workshop for his Amorphic Robot Works, 35 of his pneumatic sculptures wait in suspended animation as the audience takes their seat in the makeshift pews, and girds themselves for the unusual mass. Over the course of 30 minutes, these metallic musicians, artists, monkeys, and freaky-looking figures move and make rhythmic, cacophonous music together, all in a soaring space that’s as dramatic and intriguing as the show. (It used to be a Norwegian Seamen’s Church, how cool is that?) The Robotic Church, which is equally fun for kids, coincides with Chrysalis, MacMurtrie’s massive, interactive, inflatable sculpture that evokes molecular structures. It’s just down the street at Pioneer Works, and at 6pm on Sunday (RSVP here), you can catch MacMurtrie himself, making a bold fashion statement in his “Inflatable Architectural Intervention Bodysuit.”