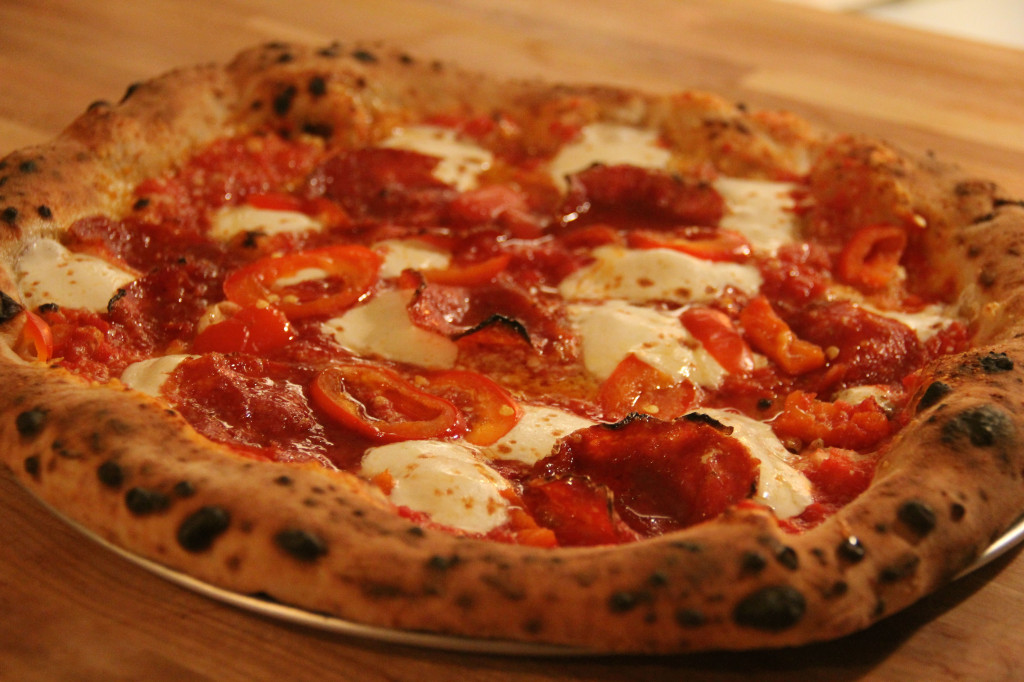 The Colony pizza is a sweet and spicy combination of pepperoni, honey, pickled peppers and mozzarella. Photo: Brendan Spiegel

Has red-sauce-saturated Brooklyn had its fill of Neapolitan-style pizza places yet? Apparently not, as the thin-crust slingers just keep on coming. One new spot that’s worth a trip from anywhere in the borough is Emily, which opened in Clinton Hill last week. The narrow sliver of an eatery on Fulton Street is helmed by Matthew and Emily Hyland, a husband-and-wife team who were formerly co-owners at Brooklyn Central in Park Slope–one of the best Italian-style pizza places to open here in recent years, in my opinion.

More exciting to those of us addicted to topping our pizzas with crazy, there’s the Camp Randall pie. Those who recognize the name of the University of Wisconsin’s football stadium won’t be surprised to find cheese curds as the base for a sausage, pepperoni, and mushroom pie.

The Hylands have moved on to a place of their own, and have done a beautiful job rehabbing the former Wallace space, outfitting it with a new bar, stylish hardwood floors and and a subway-tile-lined open kitchen. Most importantly, they’ve put in a wood-burning oven and Matt has brought along several of his signature creations from Brooklyn Central, where he was in charge of pie-making. That includes the Colony, a sweet-and-spicy blend of pepperoni, honey, and pickled cherry peppers from Clinton Hill Pickles, all layered on a mozzarella and red sauce pie, and the Emily, a white pizza named for his wife and topped with a delicate combo of Taleggio cheese, truffle spread, honey and pistachios.

More exciting to those of us addicted to topping our pizzas with crazy, there’s the Camp Randall pie. Those who recognize the name of the University of Wisconsin’s football stadium won’t be surprised to find cheese curds as the base for a sausage, pepperoni, and mushroom pie (some of Matt’s family members hail from Wisconsin). At brunch (which starts Feb. 8) there will be a “suburban hangover” pizza featuring bacon, soft sous vide eggs, and cheese.

On the classic end, there’s the Luca, a heavy-on-the-sauce margarita named after Matt’s mentor at Sottocasa in Cobble Hill where he cooked before Brooklyn Central. With each pizza, he makes the mozzarella himself, mixes the dough by hand, then cooks the pie for just one and a half minutes in the 900-degree oven, achieving a spotted charred crust that’s just this side of burnt, in a good way. This is a pizza place that takes its crust just as seriously as its dairy. The dough is even incorporated into non-pizza treats both savory (garlic-cheese-and-herb sticks) and sweet (a s’mores calzone filled with marshmallow and chocolate, then topped with a powdery graham-cracker crumble). 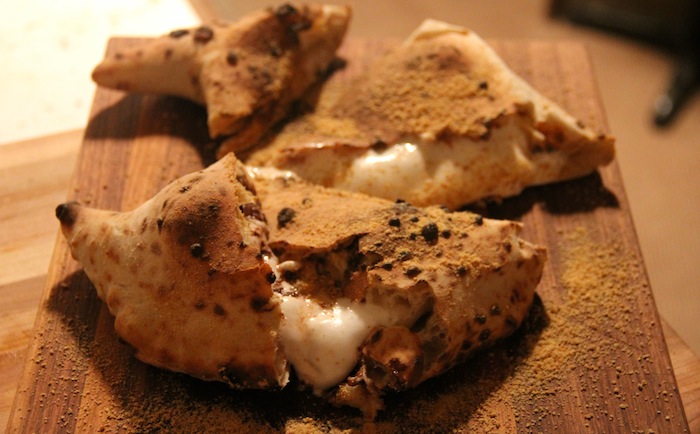 S’mores calzone! Yes, this is a thing. Yes, you want to eat it. Photo: Brendan Spiegel

The pizzas are Neapolitan-sized pies, which means a full pizza is more than enough for one person, not quite ample for two. The idea is to also order some of the share plates, which range from rabbit rillette served with Clinton Hill Pickles to a crispy pig’s ear salad. Fresh pastas made by nearby Sfoglini Pasta Shop are also excellent. 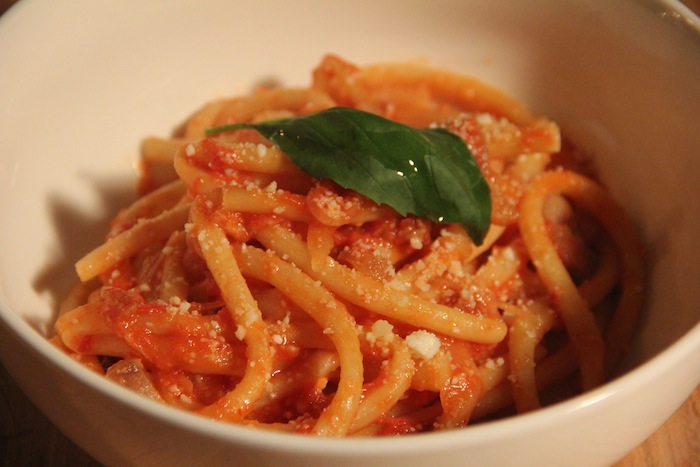 Bucatini all’amatriciana, a classic from Rome, is served at Emily. Photo: Brendan Spiegel

Hitting all the Brooklyn notes, Emily has Coolhaus ice cream sandwiches, Toby’s Estate Coffee, and handcrafted cocktails like a vodka-spiked housemade lavender lemonade. There’s also a charming six-seat chef’s tasting table right next to the wood-fired oven. While that program isn’t quite ready to go yet, it looks like a beautiful (and warm!) spot for a small birthday dinner. On the first Tuesday of every month the restaurant will offer pizza-making workshops. The first one will be a Valentines-themed couples pizza class, and in March they’ll put Emily Hylan’s other career as a yogi to work with a yoga-and-pizza workshop. So yeah…hard to see how this place won’t succeed in Brooklyn.