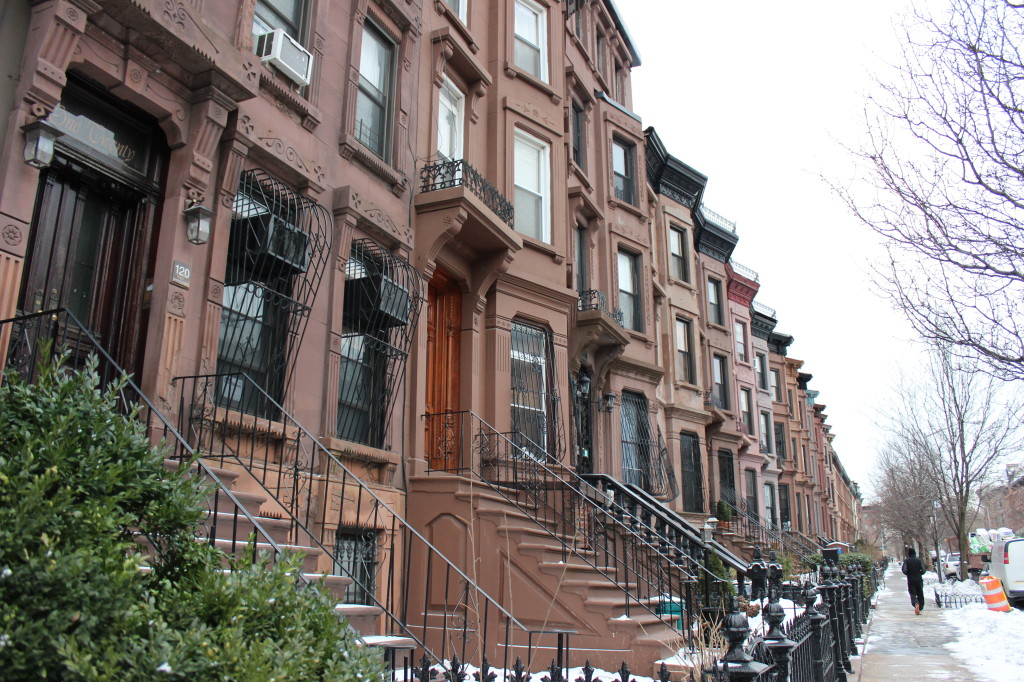 Brownstone blocks are only one side of Bed-Stuy. Photo: Gabrielle Sierra

Neighborhood residents are similarly diverse–Bed-Stuy has long been an African- and Caribbean-American enclave, and in recent years it’s become representative of Brooklyn-style gentrification, and all the rising rents, new bars, restaurants and other businesses that come along with that. But to claim that Bed-Stuy is just now beginning to change misses the big picture, says Tremaine Wright.

“People tend to ignore the influx of commerce that happened 15 to 20 years ago which sets the stage for what is happening now,” explains Wright, a life-long resident and owner of Common Grounds, a popular neighborhood coffee shop, as well as the chair of Community Board 3. “We really saw an increase of businesses over the past 20 years. Since then we have had a very stable owner base and a base of working-class families that live in the area. Things are cyclical, and now, once again, we are now seeing even more businesses coming in.”

The official geographic boundaries run from Flushing Avenue to the north, Broadway to the east, Saratoga and Atlantic avenues to the south and Classon Avenue to the west. Bedford-Stuyvesant was officially created in 1930, when the Village of Bedford and the neighborhood of Stuyvesant Heights were combined. “There are still people here who will argue with you about that hyphen in ‘Bedford-Stuyvesant’ if you don’t use it,” says Michael Lambert, executive director of the Bed-Stuy Gateway BID. “They remember when the hyphen first came!”

As a relatively new resident–I’ve been in the neighborhood for about a year–I reached out to some locals to explore the best spots in Bed-Stuy.

Of course, Bed-Stuy is one of Brooklyn largest neighborhoods, geographically speaking, and there’s no way to include every excellent spot in this guide. Please, add your favorites in the comments. And, here’s a map of all the places we mention below. 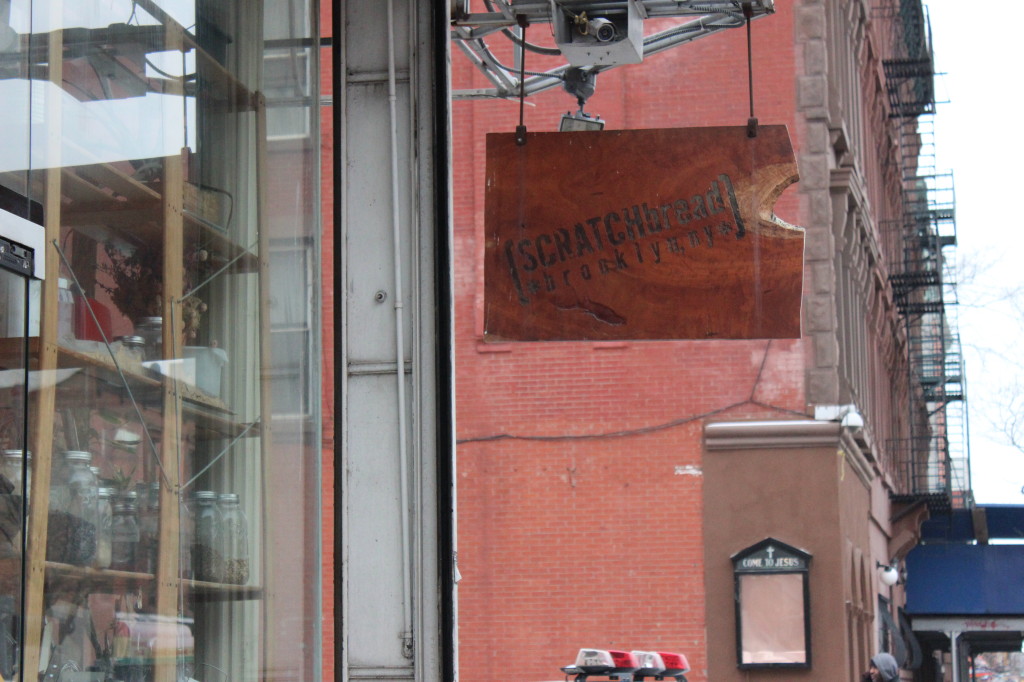 SCRATCHbread has endeared itself to the neighborhood with exceptional baked goods. Photo: Gabrielle Sierra

Where to eat: Once owned by Jewish immigrants, David’s Brisket House was passed on to a Muslim partner in the 1980s. “I get the brisket sandwich or the pastrami,” says Alex Gale, a Bed-Stuy resident of 11 years. “The history of the place is fascinating and the food is fantastic.” For diners on the go (there’s no indoor seating) SCRATCHBread offers fresh baked bread, lunch items, pizza made with seasonal ingredients and Stumptown coffee. We recommend the breakfast sandwich–cheesy bread stuffed with a soft egg, kale pesto and thick cut bacon. Ali’s Trinidad Roti Shop (1267 Fulton St.) is a Bed-Stuy staple, specializing in roti with fillings like goat, curry chicken, beef, liver, conch or shrimp paired with Caribbean drinks like Ting. Be sure to sample a Doubles–curried chickpea-stuffed sandwiches reminiscent of the Indian dish chana masala— at Ali’s or any of these spots.

You’re never far from a Crown Fried Chicken, but there are better places to get your finger-lickin’ fix. Those who like some heat on their bird will find no better than Peaches Hothouse (just don’t attempt the Extra Hot fried chicken unless your mouth is really fireproof). Halsey Street Grill focuses on soul food, offering fried chicken, spicy jerk chicken, sweet tea and pork rib tips, among other “down home delights,” as their menu puts it. With a small coffee counter and general store up front, a long wooden bar and a reclaimed-wood aesthetic in the back, Alice’s Arbor is the prefect spot to grab a drink, a cappuccino, some local groceries, or a farm-to-table dinner out. And for pizza, Saraghina serves delicious wood-fired pies, salads and super fresh specials. The backyard is a gorgeous spot in warmer months, too. Bed-Stuy is also home to the foie gras doughnut, invented by the culinary cool kids at Do or Dine. The best way to experience this spot it to belly up to the bar with a friend and order a cocktail and a couple apps to share. They also serve a mean brunch, and have a backyard that’s open in warmer months. 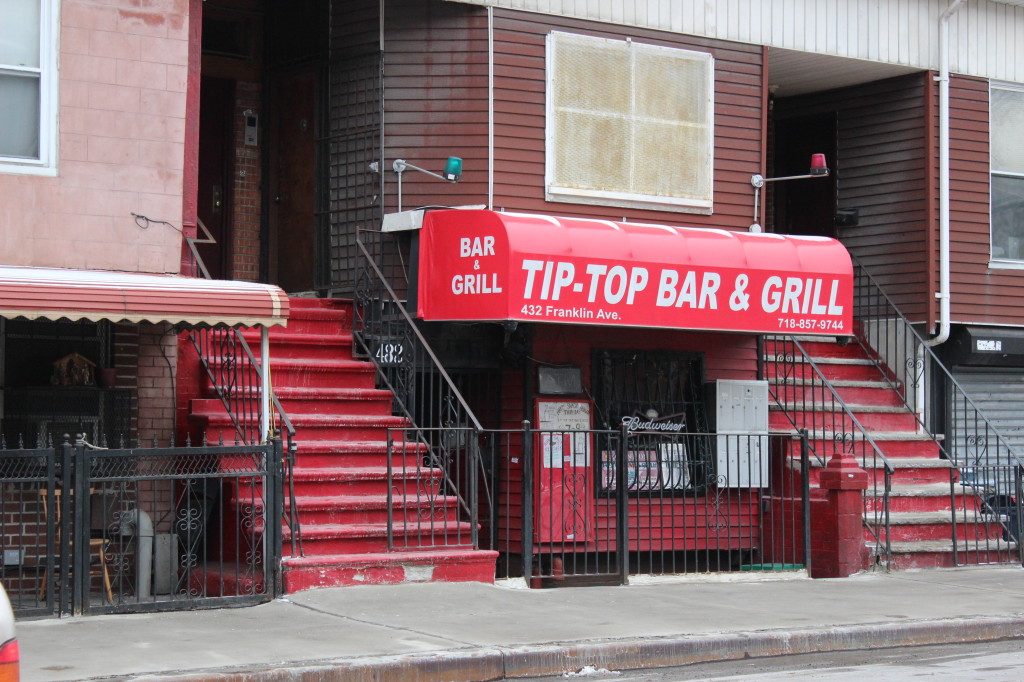 No neighborhood is complete without an unpretentious watering hole like Tip Top. Photo: Gabrielle Sierra

Where to drink: When it comes to dive bars, Tip-Top Bar & Grill (432 Franklin Ave.) is a Bed-Stuy gem. Cheap drinks, friendly bartenders, good bar food (locals swear by their fried chicken), baskets of party mix on the bar, and a great jukebox make Tip-Top a neighborhood staple. The ambiance at Bedford Hall is ideal: low lighting, plush couches, bookshelves filled with hardcovers and pattered wallpaper give the space a sort of old-fashioned smoking lounge feel. They also host special events like Scandal and Walking Dead viewing parties, sports screenings and burlesque shows. For a low-key evening, swing by the long wooden bar at Bed-Vyne Brew for a pint. Craft beer selections change seasonally. If you’d rather pick up a bottle of wine, head next door to Bed-Vyne Wine.

A new addition to the Bed-Stuy booze scene, Beast of Bourbon is a massive bar, complete with a large indoor beer-garden seating as well as an intimate front bar, both of which are great for sampling their 200 flavors of whiskey. Beast of Bourbon also offers 40 beers on tap and some pretty great BBQ, including smoked meat by the pound, sandwiches like the PBR pulled-pork, bacon and relish on a roll, and sides like mac and cheese and dirty rice. There is also a pool table up front. Another relative newcomer, Dynaco (1112 Bedford Ave.) is located on the same block of Bedford as Do or Dine, and has a wood-burning fire on chilly nights, a great beer selection, super knowledgable bartenders and a rotating menu of pies and cakes on offer to go with your cocktail or pint. And, for beer nerds, you won’t find a better spot than Glorietta Baldy, which also has a few pinball machines in the back. 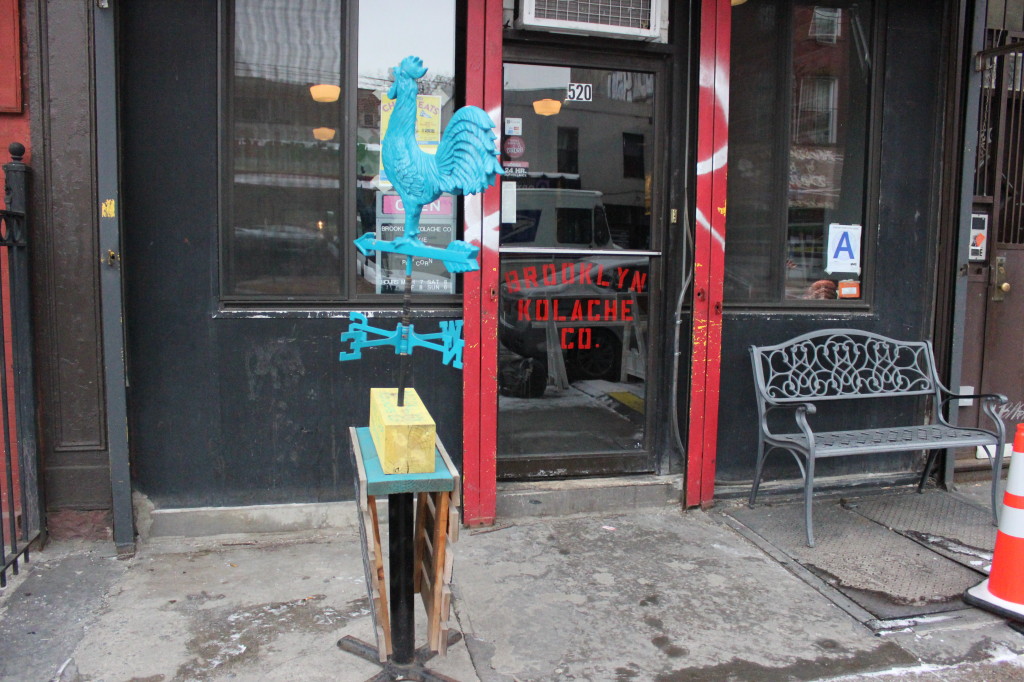 Brooklyn Kolache has the best Polish pastries outside of Warsaw. Photo: Gabrielle Sierra

Where to get caffeinated: “I’d sound biased if I recommended my own shop,” laughs Tremaine Wright, the owner of Common Grounds. So we’ll do it for her. This spot, painted in yellows and reds with a lot of natural light, offers the usual list of delicious things, coffee, smoothies and pastries, and also plays host to events, including book signings, spoken word events, and open mic nights, and has an incredible backyard. Georges-André Vintage Café opened last year by local French woman who goes by “SuperFrench” and has become a neighborhood favorite, with La Colombe coffee, Ceci-Cela pastries, sandwiches and soups. As a bonus, all the vintage furniture is for sale.

Aside from serving up some super strong and delicious coffee, Brooklyn Kolache Co. offers house-made kolaches, which are circular pastries stuffed with savory or sweet fillings like eggs, sausages and cheese, or sweet cheese and strawberry. They also have a sweet little backyard space, free wi-fi and movie screenings on certain evenings. Another sweet spot, the nearly one-year-old Bread Love, is a farm stand and cafe in the garage of an early 1900s mansion where they’ve filmed “Boardwalk Empire.” In warm weather, their picnic tables outside are perfect a leisurely brunch. Located just a block from the Bedford-Nostrand G train stop, Colador Café has great coffee, free wifi, and a friendly staff. 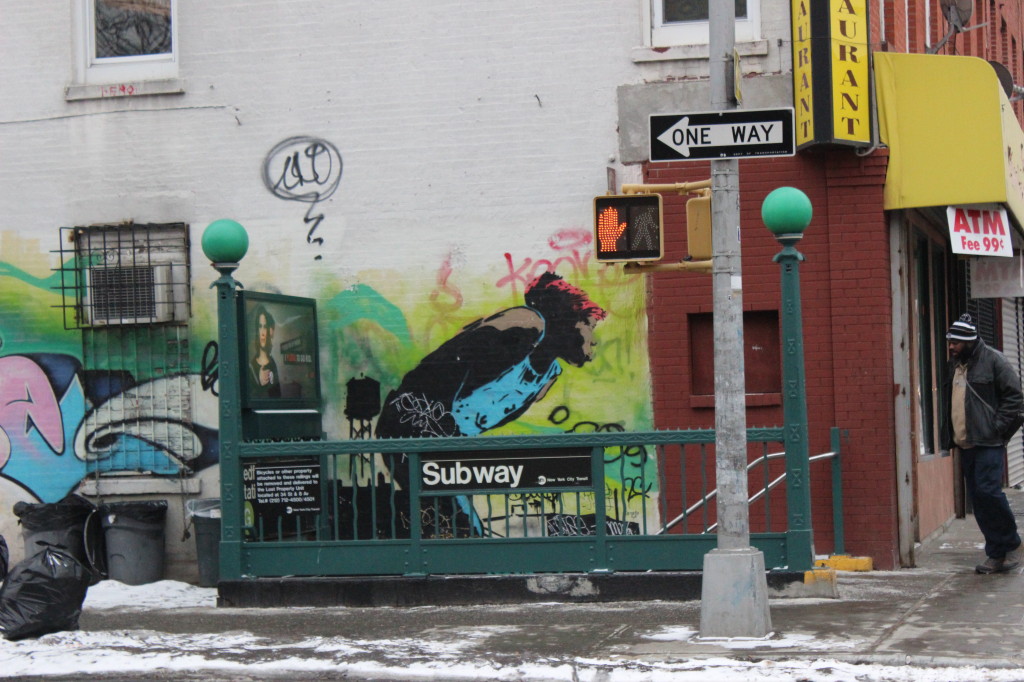 Bed-Stuy is also home to an impressive array of murals like this one by the Bedford-Nostrand stop on the G train. Photo: Gabrielle Sierra

Where to grab something sweet: Dough is known far and wide for its fresh, innovative, and  super delicious fried treats. The doughnuts are made with yeast, which gives them a specific luscious, stretchy texture, and flavors rotate depending on seasons, ingredients, and how early or late you arrive to stand in line. (They also provide the doughnuts for the foie gras version at Do or Dine.) Some of the better-known favorites have been salted chocolate caramel, blood orange, hibiscus and almond, and their simple glazed doughnut is pretty much unbeatable. 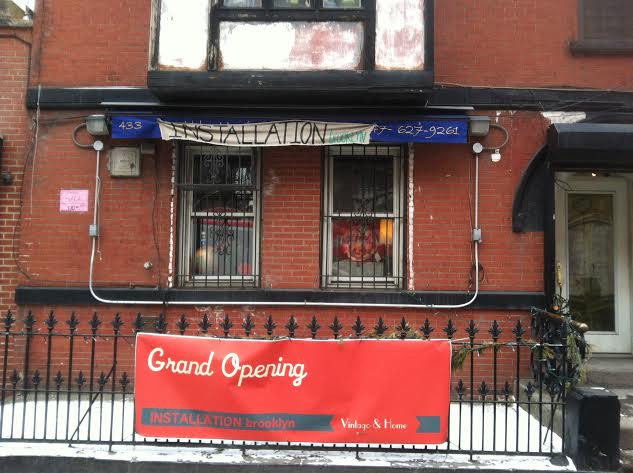 Where to shop: Installation Brooklyn (433 Nostrand Ave.) sells upcycled vintage wares including clothing, furniture, flatware, and various do-dads. Many of the items have been re-furbished by the owner, and handled with great care. After spending six years in a storefront on Franklin Ave., designer Shana Jackson now houses her vintage dresses and vintage-inspired collections in the by-appointment-only Collecther Showroom–it’s worth calling ahead to plan a visit.

While it looks like a supply stop for wholesale beer pickup, Bed Stuy Beer Works is actually open to the public. Stop in for seasonal brews, craft beer and imports, as well as kegs, ice and soda. “I like going to Bed Stuy Beer Works because they play classical music a lot and they have the random German lagers I like for very cheap prices,” says Tobias Salinger, who lives nearby. “I also picked up a keg of Stella for a party I threw, they were really chill about it and let me use the store dolly and I didn’t have to bring the keg back for two weeks.”

Don’t Miss: Located in the Salvation Army building, Crazy Legs Skate Club is an old-school skating space with a hardwood floor, room for a private party and a pretty spectacular playlist. Get your wheels turning on the hardwood floor during an open skating session every Wednesday between 8pm and midnight, accompanied by a live DJ. Bike Kill is an annual gathering that showcases the biggest, weirdest, and craziest of all bicycles. Held in the lot behind Home Depot, (585 Dekalb Ave), the Saturday before Halloween, this event features riders and their creations, rolling around on two wheels–or four, or eight. It gets a little wild after hours, so leave the kids at home once night arrives. 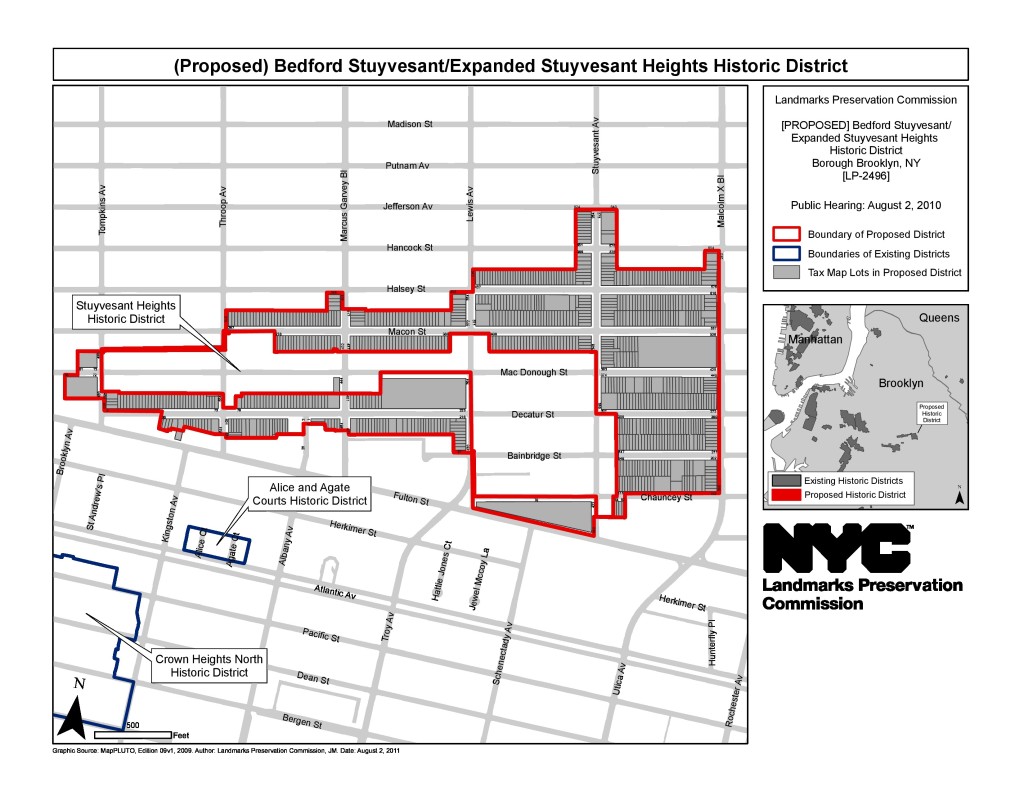 Care for a stroll? Bedford-Stuyvesant has one confirmed historical district and one awaiting approval. Long tree-lined blocks show off the incredible details on each brownstone, from arched windows to intricate and adorned facades. “If you haven’t been here in a while, I like to tell people to make it a point to come,” says Michael Lambert of the BID. “Walk through the historical district, check out the brownstones, stop for coffee somewhere after, and be surprised at what you find. You’ll see why Bed Stuy is an up-and-coming neighborhood.”

How to get there: The G train serves the north and west side of the neighborhood; the A and C runs along Fulton Street to the south, and the J train follows Broadway to the east, leaving a large swath of the center of Bed-Stuy best accessed by bus, bike or car. Or of course, on a leisurely stroll.

Leave a Reply to Melissa Danielle