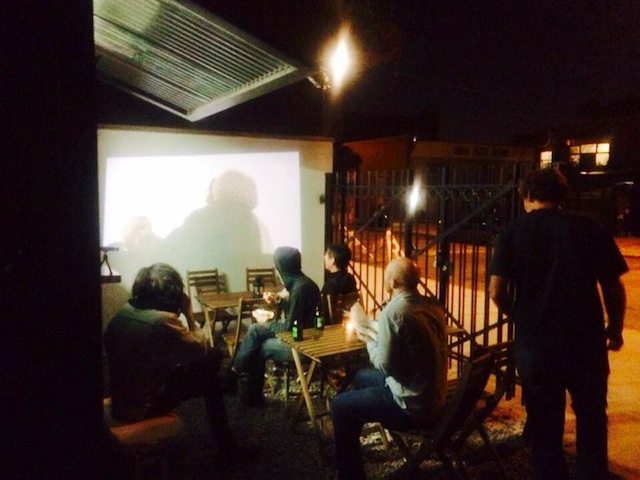 Movie night at The Diggs, where they sling poutine till the wee hours. Photo: The Diggs

I seem to be the last New Yorker still clinging to the notion that Bushwick is too far from everything to frequent regularly, but that’s clearly my loss, as the neighborhood is home to the city’s fastest-growing restaurant scene. But while most of the new-school Bushwick attention has been centered on Morgan Avenue, I’ve been particularly surprised in recent months to find how much of a crazily vibrant adult playground the area surrounding the Jefferson Avenue L stop has become. In addition to neighborhood standbys like Northeast Kingdom and Tandem, relative newcomers such as the bocce-and-bourbon fueled bistro Mominette have been joined recently by a slew of hip new drinking-and-dining options, ranging from excellent pub grub at The Rookery to solid Neapolitan pies minus the Roberta’s-sized wait at Union Pizza Works.

The Jefferson Avenue corridor has grown into enough of a destination in its own right that few neighborhood regulars have even tried to semi-secede from greater Bushwick by bestowing this stretch with its own moniker: Jefftown—which was met with about as much venom and ridicule as any other attempt to name/claim a gentrifying neighborhood. Call it what you like, on a weekend evening, the buzzy strip feels almost like Bedford Ave. five years ago, or Rivington five years before that…or, you get the point. It’s going to suck really soon, but for now, it’s quite a trip. Perhaps most notably, a few brand new developments have turned it into Brooklyn’s best neighborhood for eating at 2am. 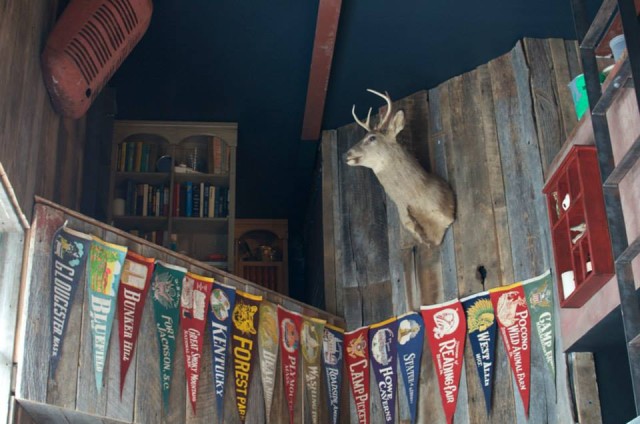 The cabin-like Montana’s Trail House is focused on adventurous, Western-influenced cuisine like a “tongue and cheek rueben,” featuring those two meats topped by sauerkraut and a soft-cooked egg. Montana’s also just added brunch this past weekend, with items including  a brisket-and-brook-trout hash, the required-at-any-new-Brooklyn-restaurant fried chicken biscuit, and a very serious veggie sandwich featuring mushrooms topped by fresh ricotta and pickled green tomatoes. But of most interest to the hard-partying crowd in this ‘hood is the late-night menu, served until 3am and including fried pickles and pulled chicken sliders. Plus, instead of the ubiquitous trashy-beer-and-shot special, they go with a more essential trashy-beer-and-meat special: a sausage corn dog washed down by a Budweiser, for $8.

Keeping with the Western theme, on nights that Montana’s is too packed (which seems to be often) you can just head around the corner to The Diggs for an overflowing pile of late-night French fries topped with Denver green chili and citrus pulled pork. Tucked behind Bodega wine bar, this just-opened spot is a stationary shack (more like Portland’s food carts than a food truck).  The fry-centric space also dishes out poutine topped with smoked meat or tempeh, and French fries gone “New England,” with lobster and Old Bay on top (not that you find Old Bay in New England pantries), along with a lineup of similarly gorge-worthy creations. The tiny outdoor space also screens cult-classic movies on the whitewashed wall (follow their Twitter feed for details). Come daytime, they offer huevos rancheros and full English breakfasts.

For yet another option to stuff your face at 3am, the neighborhood’s popular Arepa Guacuco just branched out with Guacuco Hotdogs on nearby Starr Street, specializing in South American-style dogs, meaning they’re topped with piles and piles of condiments, a mound of mustard, mayo, ketchup, onions and pickles high enough that the meat itself becomes an afterthought.

If that’s not enough midnight grub for ya, , the sprawling luxe new lounge that is probably as Manhattan-y as Bushwick has gotten yet, promises to up the late-night food ante even further with the addition of its own food truck, coming soon.