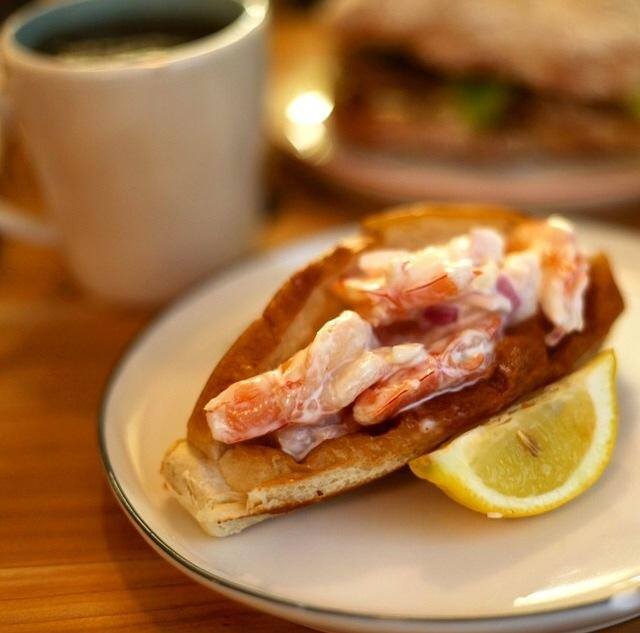 North Brooklyn is awash in oyster happy hours, but two new Greenpoint eateries are betting that the borough’s obsession with oceanic fare will extend beyond bivalves. Littleneck Outpost, which opened in early July, and Greenpoint Fish and Lobster Co., which debuted last week, both offer fresh fruits of the sea in quaint, New England clam shack-style surroundings with lots of twee touches like vintage oyster knives and Old Bay canisters, mixed in with for-sale items like Cape Cod sea salt and Brooklyn-made saltwater taffy.

Littleneck Outpost, set along the lovely stretch of Franklin Street just south of Greenpoint Ave., is a casual spinoff of Gowanus’ popular seafood restaurant, Littleneck. The outpost is a bright, all-day cafe with rustic wood floors, counter ordering, and just a few two-top tables against the huge, street-facing windows. Open for breakfast, lunch and dinner, the focus is on sandwiches on bread from nearby Bakeri. Mini breakfast sandwich options include gin-cured Arctic char with creme fresh and dill oil. At lunch there are shrimp rolls, whole belly clam rolls and lobster rolls. The latter pushes the limit of casual pricing at $18, but you do get a very hefty serving of fresh lobster. Some of the more enticing options here are actually more land than sea, like a beautiful roasted beet sandwich with soft-boiled egg, watercress and quark–a creamy-tart fresh cheese, and a Benton’s ham, egg and cheese breakfast sandwich. Whether you’re in it for the seafood or not, it’s a cozy and comfortable spot to spend an afternoon people-watching, and everything is available to go. 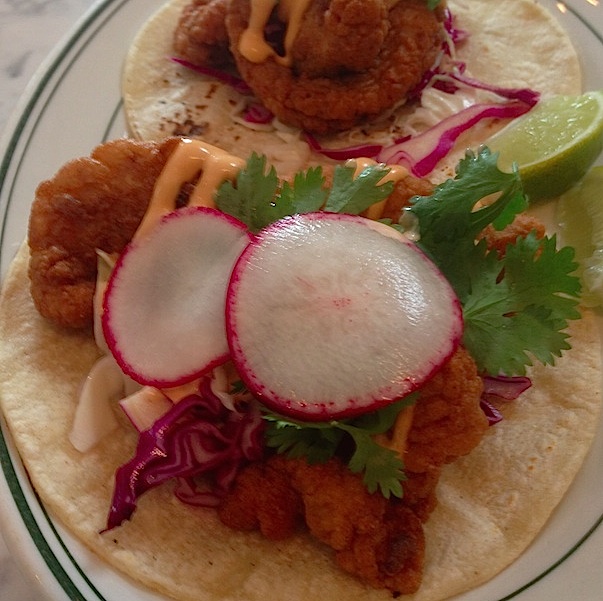 Greenpoint Fish and Lobster Co., over on the corner of Nassau and Eckford, is the more ambitious of the two newcomers. While dealing with just as small a space, they squeeze in a small retail fish market with a takeout window in the front, plus a curved marble bar fronting an open kitchen, lobster tank, and a raw bar displaying the day’s assortment of shellfish, which includes a variety of oysters as well as fresh scallops. Their lobster roll (also $18) was already sold out when I stopped by on Saturday afternoon, so I couldn’t do a head-to-head taste test, but they also offer whole lobsters ($10.99 a pound) along with a menu of daily catches that range from a whole deep-fried Montauk porgy to squid a la plancha, and more creative dishes like a pad Thai salad where strands of kelp stand in for the noodles. A sizable bowl of clam chowder was chock full of whole clams and comes with delightfully smoky charred toast, while batter-fried hake tacos topped with chipotle mayo ($9 for two tacos) were by far the best thing I sampled at either restaurant.

Verdict: the laid-back Littleneck Outpost is more likely to be your favorite new neighborhood lunch spot, but serious seafood afficionados will want to check out Greenpoint Fish and Lobster Co.–judged on first bites alone, I’m definitely more excited about the latter.

Leave a Reply to Brendan Spiegel