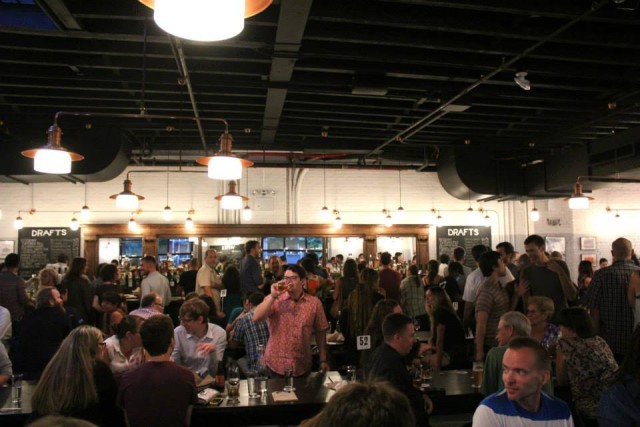 The borough-dominating team behind Brownstoner, Brooklyn Flea and Smorgasburg is finally ready to open their hotly (and angrily) anticipated new venue in Crown Heights this Wednesday. The marquee element of their small-producer food incubator, Berg’n is an indoor-outdoor beer hall with tons of group seating, a 40-foot bar pouring local brews, food from four of Smorg’s most popular vendors, and a coffee bar by Parlor including treats from Dough donuts. Translation: You’re gonna end up here for just about every Brooklyn birthday party over the course of the next year, and it’s gonna be crowded as f@#$.

But that doesn’t mean you can’t handle Berg’n. Brooklyn Based checked out their pre-opening party last week to get the lay of the land, and put together this handy guide so that you can navigate Berg’n with minimal frustration.

Berg’n opened its doors to friends and family on Friday. Its grand opening is Wednesday. Photo: Berg’n

How it works: There’s table service for drinks (which can also be ordered at the bar), but food is ordered separately from each of the four vendor’s window counters. You get a tabletop number and then the grub is brought out to your seat. Assuming you’re operating with a party of six or more, you can cut down on the navigation time by assigning one friend to secure table space (you know which of your friends can handle this task best), one to grab drinks from the bar (for faster service), and the others to split up at each of the four food windows (assuming, like us, you obviously have to try everything). Here’s what to eat…

Main: Mighty Quinn’s. You’ll find chicken wings, pommes frites, and burnt end baked beans, but the main attraction here is the main course: barbecued brisket. Skip the sandwich and go for beef-by-the-pound, no bargain at $23, but an ample serving for a group to start feasting on — and a fair enough price considering this is some of the best barbecue you’ll find anywhere in NYC.

Sides: Pizza Moto.  The guys behind the mobile wood-fired oven at Flea and S’morg will open their own brick-and-mortar spot in Red Hook this fall, but first they’re bringing pizza (handily available by the slice) to Berg’n. Moto does an excellent, slightly charred margherita, but even more exciting are their veggie sides, including a beautiful roasted cauliflower topped with fresh lemon and a fennel-y Morrocan slice blend ($7)…a nice contrast to your smokey meat plate.

Novelty Factor: Ramen Burger. I have to say I don’t totally get this Cronut-era creation. Slapping your burger in between layers of flimsy noodle-pie seems acceptable only for drunk college students who forgot to buy buns, but apparently it’s a legit thing now.  I skipped the all-beef burgers and opted for their bacon-egg-and-cheese-on-ramen breakfast sandwich ($7). IMHO, there’s nothing worse than having a perfectly runny fried egg burst open on your plate, but not having any bread to soak it up with. Although let’s be honest, you’re not gonna come to the heart of hipster heaven and not at least try a ramen burger…you only need one though. Take an instagram and move on.

Dessert: Asia Dog. You can’t, however, argue with the appeal of friend banana spring rolls with chocolate sauce ($5)—a perfectly unhealthy end to this heart-stopping mini-smorgasburg. Asia Dog also has a full lineup of chicken, beef and veggie dogs, plus kimchi mac and cheese, wasabi potato salad, garlic sesame kale, and deviled egg balut with fermented pimento cheese (just kidding, I made that last one up).

Beer. Oh right, the most important part. They’ve got an impressive array on tap, including options from Brooklyn’s newest brewery, Other Half, who paradoxically offer up a very tasty West Coast IPA ($8).

There you go, folks. Approach Berg’n with caution and I’m sure you’ll have a great time.