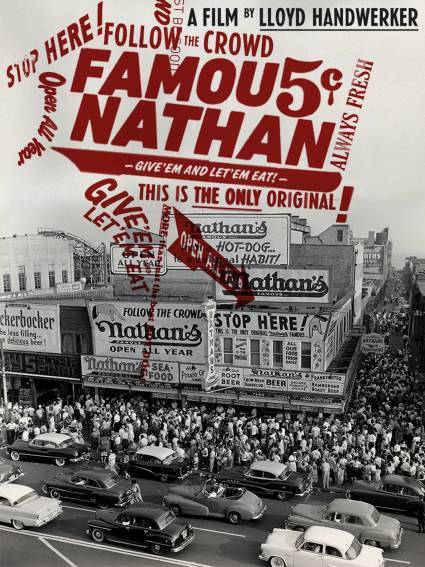 Famous Nathan, a recent documentary by Lloyd Handwerker explores the history of a very special restaurant: a little family-owned hot dog joint on the Coney Island boardwalk. Founded in 1916 by a hardworking Jewish immigrant named Nathan Handwerker (the director’s grandfather) Nathan’s Famous was a neighborhood hub throughout much of the twentieth century, flourishing even during the Depression.

Famous Nathan, which will screen Saturday, Sept. 20 at the Coney Island Film Festival, is essentially a very well-produced home video about an interesting Brooklyn family. But with that in mind, there are some truly wonderful and insightful interviews with former employees, friends and family. Though the interviews are, ultimately, about hot dogs, what emerges is a surprisingly intimate and charming narrative, with many scene-stealing characters and Coney Island legends. 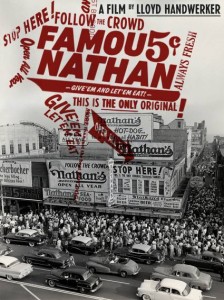 A few former employees remember how the restaurant hired minority workers when it was still relatively controversial to do so; quality work and productivity drove Nathan’s hiring practices above all else. Hyman Silverglad nervously tells how Nathan’s would bribe the local cops to not enforce double parking laws outside the crowded restaurant. “Nobody ever got a parking ticket at Nathan’s,” he grins. Richard Traunstein recalls when Nathan pulled the open condiments from the counters because of public fear that someone would put LSD in the mustard. Jimmy Bologna, a longtime employee, incredulously recounts Nathan Handwerker’s complicated, bizarre, and frequent taste testing of “naked” hot dogs. The memories from these peak years are recounted in thick Brooklyn accents and with such mischief that, more than just the stories themselves, what’s communicated is a sense of joy and pride. Watching Famous Nathan often feels like a conversation with your grandparents.

The Handwerkers sold Nathan’s in the late eighties after struggling to remain profitable, and the film nostalgically admits that Coney Island is in a strange place these days. When asked about the circumstances of the neighborhood, director Lloyd Handwerker notes that “those passionate about keeping Coney Island more focused on amusement and family experience rather than real estate development are winning some battles and losing others.” He continues, “no one expects Coney Island to return to the glory of days past, [but ] the goal is to keep it growing while maintaining its integrity and free-spirited essence.”

Famous Nathan is a family portrait, not a call to action, and Lloyd Handwerker makes no judgments or advisements about how to revive the neighborhood or its businesses. But Famous Nathan does a lovely job of capturing the spirit of a bygone era in the neighborhodo and showcasing the people who made it interesting.