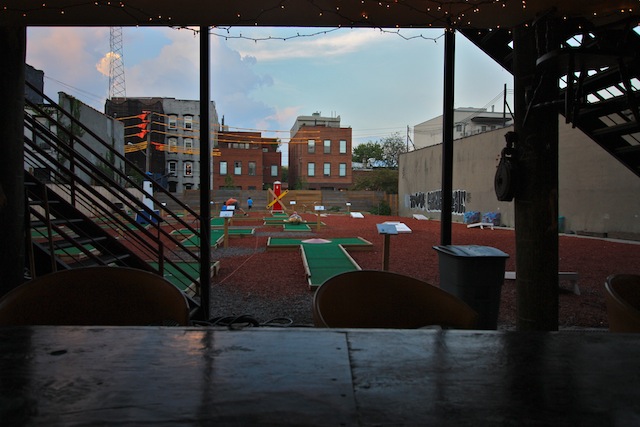 The backyard of Brooklyn Crab is your oyster during three hours of unlimited beer and oyster tastings this Saturday. Photo: Brooklyn Crab

With just over a week left ’til Oct. 31, Halloween is already creeping into the calendar, threatening to eclipse perfectly unspooky events like the CMJ Music Marathon, that annual showcase for new music across hundreds of NYC venues. We’ve winnowed the 1300-band lineup down to 15 bands to check out. On Saturday, you can consume as many oysters and beers as humanly possibly during Brooklyn Crab’s Fall Oyster Fest. Or you can just give in to the ghoulish festivities.  The coming wave of costume parties begins this weekend, along with more family- and dog-friendly ways to get your Halloween on, like The Great PUPkin in Fort Greene Park on Saturday and Bushwick’s ¡Calabazafest! on Sunday.

Here are seven more, not terribly scary ways to enjoy your week:

Thursday, Oct. 23: Originally we suggested you wash tacos down with Sixpoint cervezas at a Mexican pop-up dinner with LocalRootsNYC and Meal Sharing, but the chef had to postpone it till Nov. 20. Instead, head to Hill Country tonight to hear Seth Meyers in conversation with the executive editor of Linkedin, Dan Roth, in a new series of live talks with celebrities, business owners and politicians making an impact in Brooklyn called “The Brisket Sessions.”

Friday, Oct. 24: If you have $5 and are looking to laugh this Friday night, head to Littlefield in Gowanus for the premiere of the new Comedy Central web series, New Timers. Created by and starring Matt Porter and Charlie Hankin of Good Cop Great Cop web series fame, the show follows the eponymous duo as they navigate a post-apocalyptic world. Look out for cameos by local comedians and writers like Megan Neuringer (Best Week Ever), Doug Moe (Funny or Die), Emmy Blotnik (Nikki & Sara Live) and a whole bunch of other UCB alums. The 21+ show starts at 7:30pm.—N.R.

Saturday, Oct. 25: DIY music venue Death by Audio’s days are numbered, but they’re not going quietly into the night. Tonight kicks off a month’s worth of goodbye parties, starting with the Holly Jolloween 24-Hour Drone Festival, in which back-to-back sets will guarantee that there is not one second of silence from 7pm on Saturday through 7pm on Sunday. It’s the first of 13 parties Oriana Leckert picked out to get your Halloween on this year.

Sunday, Oct. 26: Holiday season is right around the corner, and you could use a way to cope with the coming stress. Every Sunday, design studio Holstee hosts the most relaxing sounding yoga session—a one-hour candlelit vinyasa class at their Work/Shop in Carroll Gardens beginning at 6pm, followed by a 30-minute meditation period. Purchase $10 tickets online or at the door.—N.R.

Monday, Oct. 29: Tavi Genison, a true wunderkind who somehow doesn’t manage to inspire the same ire as the similarly multi-talented Lena Dunham, is coming to powerHouse Arena on Nov. 5 to read from the latest Rookie anthology, Rookie Yearbook Three, and there are still $10 tickets left to the event. Of course, you can also catch her on Broadway, in This Is Our Youth, whose tickets, surprisingly, start at $35. Kenneth Lonergan’s play focuses on three late-teen New Yorkers as they navigate a weekend full of drugs, sex, identity struggles, filial resentment, and other hallmarks of that fraught time just before true adulthood kicks in. First staged almost 20 years ago, it is set in 1982 and an anachronistic corded telephone features heavily as a plot device, but the themes are remarkably applicable to our time and the dialogue is incisive, authentic, and often very funny. Michael Cera plays a profoundly awkward, sensitive character (surprise, surprise), which he continues to do really well, Kieran Culkin shines as his jaded, alpha friend/drug dealer, and Tavi Gevinson makes her stage debut. Full of F bombs and cocaine, this show is the antithesis of a Jersey Boys matinee with the blue hairs, and is worth seeing before its run ends in January.—K.H.

Tuesday, Oct. 28: We’re halfway through Cider Week New York, and if you still think hard cider is too sweet for you, it’s time for another taste. There are now a million ciders in every style, and Cider Week, which began Friday and runs through Nov. 2, offers plenty of Brooklyn-specific affairs where you can squash your bad memories of Woodchuck. Park Slope’s Palo Santo is offering a weeklong cider and oyster pairing, Greene Grape Annex is pairing American cheeses and ciders on Sunday and tonight, iCi is pairing ciders with a four-course farm feast. The official rundown of events is here, but more than two dozen local bars and restaurants like Mission Dolores, 61 Local, Egg, Roberta’s, Tuffet and Bed-Vyne Brew are joining in on the festivities and featuring craft ciders on their menus.—N.R.

Wednesday, Oct. 29: As the world around you becomes cloaked in ever more plastic skeletons, fake bats, and candy corn, an event at the Center for Fiction will take listeners back to the early roots of Halloween, as authors like Lev Grossman, Megan Abbott, Randy Cohen and Tonya Hurley read from a new edition of The Legend of Sleepy Hollow. The classic tale of Ichabod Crane and the Headless Horseman features a new introduction by Elizabeth Bradley, a New York historian and scholar of Washington Irving, who is often credited with establishing the short story as a distinct literary genre—a factoid that could win you a round of bar trivia one day.