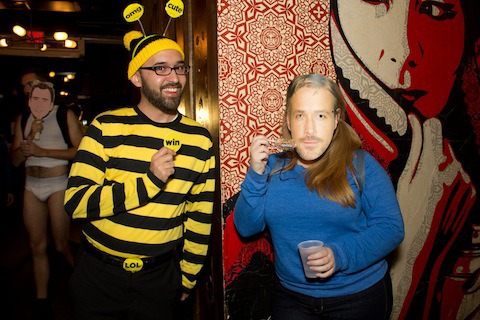 Internet addicts unite and take over at Hallowmeme each year, posing as everything ubiquitous and viral, whether it’s BuzzFeed or the popular Vine, “Ryan Gosling Won’t Eat His Cereal” (right), both from last year’s party. Photo: Forced Meme Productions

Do you spend far too much time on the Internet and also have a penchant for making costumes? If so, Hallowmeme, a party and costume contest inspired by the memes, viral videos, and the GIFs everyone has been posting on your social media all year, is probably already part of your annual October tradition, and if not, you should go anyway for the people-watching alone. Now in its sixth year, this delightfully nerdy convention of professional bloggers and amateur web geeks with serious arts and crafts skills hits the Bell House this Thursday at 8:30pm, and it’s free so long as you RSVP. 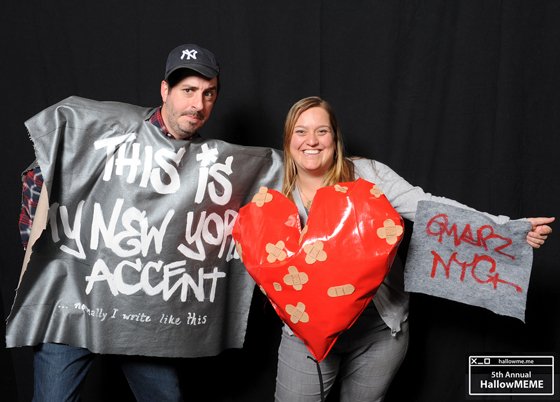 The author and her boyfriend, dressed up at the 2013 Hallowmeme as the Banksy pieces that popped up around NYC last year. Photo: Forced Meme Productions

I consider myself pretty Internet-savvy, and my love for Halloween rivals that of the writers from Roseanne or The Simpsons, but I’m always amazed by how many of the references at Hallowmeme are new to me and how seriously the crowd generally takes its costume-making. There is always a photo backdrop area with a professional photographer taking shots of all the revelers, and it’s fun to post up there with a beer and marvel at the energy and creativity on display. In years past, the evening has been dominated by Psys and Sharknados, and I’m predicting that Thursday night will see a lot of basic bitches and ice bucket challenge-themed getups. (If you don’t have any ideas, Forced Meme Productions has some suggestions.) But there are always a few people who really dig deep and get weird. Two years ago, one of my favorites was a person who perfectly recreated the botched restoration of a Jesus fresco in Spain that had been in the headlines the previous summer. Last year, I was very impressed by a Patrick Bateman that had nailed every detail, from a Huey Lewis cassette in his Walkman to a business card printed, obviously, on “bone.” The judges of the official costume contest liked that one too, as that guy nabbed second place at the end of the night. 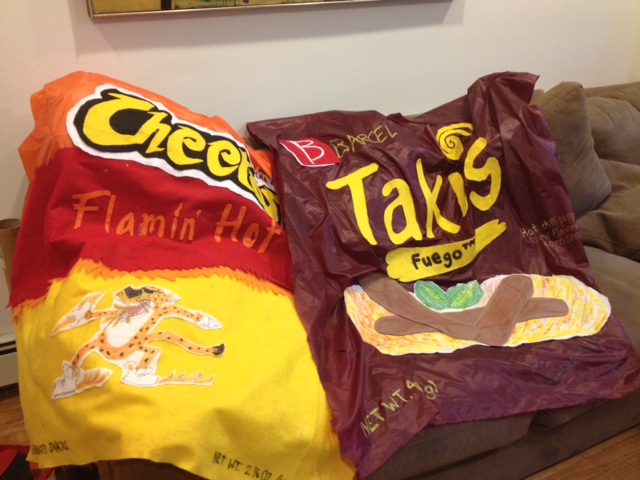 Hallowmeme costumes made with felt, glue, and love for a viral video about Hot Cheetos and Takis. Photo: Kate Hooker

In my opinion, the contest part of the evening is sort of an afterthought, and the judges, a panel of Internet pros who work in media, never seem to recognize the efforts that I think are the most original and imaginative (the grand prize in 2012 went to a Honey Boo Boo, albeit an elaborate and perfectly executed one). Hallowmeme isn’t really about the fame or money though, and you will have the most fun if you choose something from the Internet that really resonates with you and just go to town with it. One year my boyfriend and I were bags of Hot Cheetos and Takis, in a nod to our fave viral video of that year, and last year we dressed as two of the Banksy pieces that popped up during the artist’s month-long New York City “residency,” which we’d been following somewhat obsessively. Both costumes were fun to make and wear, but not nearly as entertaining as being wowed by what our fellow Hallowmemers managed to come up with.