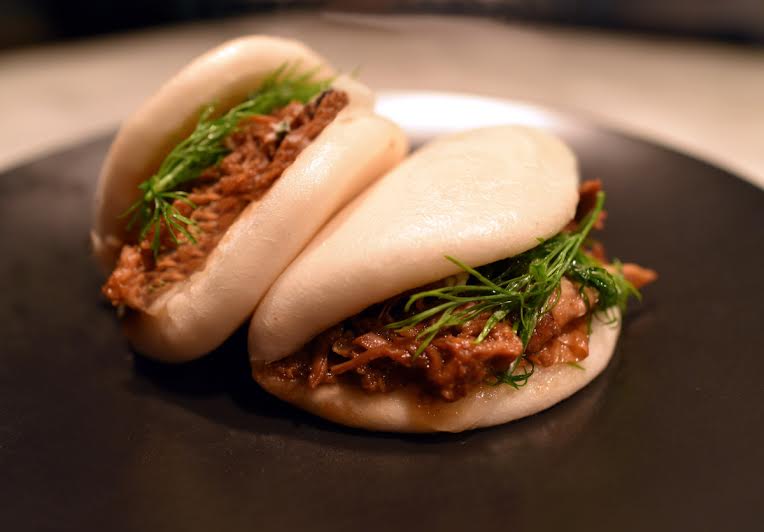 The lamb buns at Cooklyn are the stars of the small-plates menu.  Photo: Michael Tulipan, courtesy Cooklyn

Ever since David Chang upscaled the traditional Chinese bao with his famous Momofuku pork belly buns, we’ve seen these springy steamed buns pop up on all kinds of trendy menus, filled with everything from fried chicken to Nutella. But my favorite repurposed bao yet is found at Prospect Height’s new Cooklyn, where chef Anthony Theocaropoulos has dreamed up a lamb-based bun that infuses all the flavors of a Greek gyro, plus some Asian influences too, into one delectable bite-size portion. Theocaropoulos starts with a slab of lamb belly braised in a combination of soy sauce and veal stock, along with a scattering of aromatics, and cooks it down low and slow until it’s tender enough to pull apart, BBQ-style. Then he reduces the sauce down until it’s thick and gooey, and serves the whole thing slathered on one a fluffy steamed bao, topped with a feta cheese, yogurt and mint sauce, plus tiny pieces of pickled daikon and a copious helping of fresh dill.

This oddball-but-upscale warming winter dish is rather representative of Cooklyn, which opened on Vanderbilt Avenue this November and is a bit hard to pin down. It’s the first head chef gig for Theocaropoulos, who grew up in a Greek-Italian family (his father owned a string of Greek diners), and previously cooked at Ai Fiori, as well as Eataly’s pasta and pizza restaurant. All of those influences are evident at Cooklyn, which is at times playful and at times extra-fancy, described as New American but light on the kale and beets, heavy on fresh pasta and seafood. 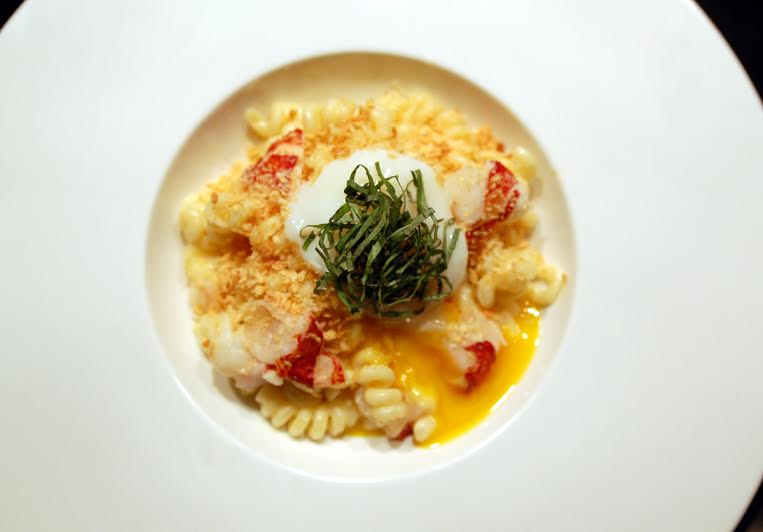 The lamb buns ($5 each) are the standout on the small plates menu, which includes other inventiveness like venison wontons ($11) plus more traditional fare such as mussels in a spicy, garlicky lobster broth ($13) and an excellent octopus a la plancha served over smoked potatoes and avocado ($14). The namesake Cooklyn salad ($15) is a seafood explosion with sizable servings of lobster and shrimp tossed among dragon fruit, cucumber and greens, all covered in a tangy and creamy sesame dressing.

The pasta dishes here similarly run the gamut from comfort fare to fancy. Lobster mac and cheese sees orecchiette (the night I visited) and lots of lobster meat swimming in a thick, thick cheese sauce, then crowned with a coating of panko bread crumbs and a runny poached egg to add an extra ooze of comfort. On the other end of the spectrum, fresh squid ink cavatelli comes brimming with scallops, shrimp and calamari, and finished in an extra tart Meyer lemon sauce. They’re about as different as two pasta dishes can get (each are $16), but both are hearty and delicious. Mains are a little less far out, ranging from a pan-seared salmon ($21) to seared duck breast with duck confit and couscous ($24). These dishes are solid but less exciting; I’d recommend sticking to the small plates, salads and pastas–definitely more than enough to build a meal around. There’s also an excellent and diverse wine list, with many options from small producers in Central Europe, as well as Italy. The restaurant recently secured its full liquor license, so cocktails are coming soon.

Cooklyn also launched brunch this past weekend, which seems particularly well suited to Theocaropoulos’ playful tendencies, with options like a fried oyster Benedict and ricotta-stuffed brioche French toast topped by key lime zest and apple syrup. Enjoy either alongside a glass of milk infused with Fruity Pebbles flavor. Sounds like a good base to start building that winter cocktail menu around.