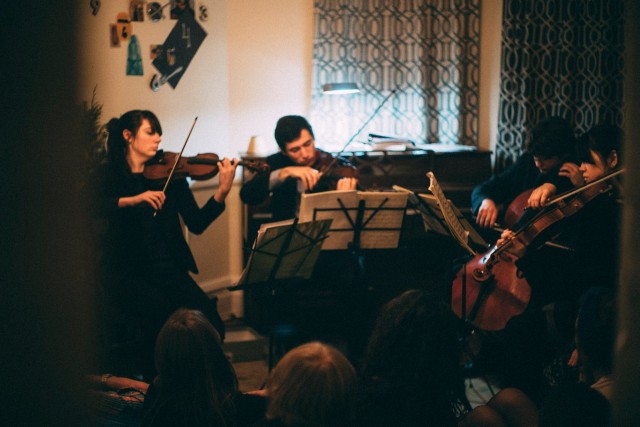 It’s probably not a stretch to say that the very mention of classical music is enough to conjure images of grey-haired couples filing into a concert hall. For those not exposed to this music at home or in school, or for us cheapskates who can’t imagine spending wads of cash on tickets at Carnegie Hall, it’s easy to feel that this world is just not made for us. But what if you could hear the works of Shubert or Beethoven played in your friend’s apartment, or the home of a stranger, for a small donation? And by played, I mean live, by a real musician, not just on someone’s shabby chic record player.

If this sounds a little far-fetched, you probably haven’t heard about Groupmuse yet. Founded in 2013 by Sam Bodkin as a way to “sneak classical music back into the diets of young culture seekers,” the site connects classical music fans, and those curious about the genre, to professional musicians and apartment dwellers with the space to host chamber music concerts that anyone can attend. There are so many Groupmuses happening in New York right now, that on any given night you can find a free concert house party to crash. Gatherings last long after the evening’s music has finished, and each event is BYOB.

“Music has an inherent social quality: You are obliged to engage with the scene, if you are listening to live music,” says Bodkin. And classical music, he says, has a similar social scene. “It’s just antithetical to youth values. People often have an associative problem with it.”

Two Fridays ago, I piled into a Crown Heights apartment with 40 other music-loving millenials to seek out some chamber music. We huddled onto our host’s bed, perched on top of furniture and stared in the direction of the violinist at the center of the room. Keir GoGwilt played Bartók in his socks, surrounded by hoards of cross-legged peers sipping on drinks purchased at a nearby bodega, or carted from the subway in a black, plastic bag. Due to Groupmuse’s public invite policy–anyone can RSVP for a nearby event–some of us were meeting for the first time, while others reconnected with familiar faces.

Hosting a Groupmuse is also an equal opportunity affair–no space is too small, though you should have room for at least 10 attendees, the majority of which can be your friends if you prefer. Groupmuse handles all of the logistics, from the number of musicians you can accommodate (based upon the capacity of your apartment) to keeping your address private until the day before the concert, when attendees are notified with the specific location and other details. At the show, the audience is encouraged to donate at least $10 to support the young, conservatory-trained musicians who perform these intimate concerts in an effort to share their music with a new type of audience–one their own age. Performances are short enough to command a novice listener’s attention span, and the proximity to the performer is totally unbeatable.

“You can really appreciate this music when it’s right in front of your face,” says Teddy Martin, a frequent Groupmuse attendee and sometimes host. At the Groupmuse I attended, I was literally at GoGwilt’s feet, our toes practically touching, while I craned my neck to get a closer look at the complicated patterns he traced on the neck of his violin. As for everyone around me, they were pretty freaking into it, too. That night, the only thing that broke our attention was a toppled over glass of red wine that spilled onto a few Groupmuse enthusiasts as the last rounds of applause rang out.

In order to create the best atmosphere possible, each Groupmuse is tailored to the space in which it occurs. In cozier spaces, you might find a solo violinist. If the event takes place in a roomier spot, the performance may be a larger quartet of musicians. Chamber music, by definition, refers to smaller ensembles, where no amplification is needed, and the instruments are relatively light and portable. It’s quite easy for the crowd to catch what Bodkin calls a “Groupmuse glow” from the immersive nature of the concert.

Moving forward, Bodkin envisions Groupmuse becoming a fixture in all cities that have the community of musicians to support its model. Right now the group organizes events multiple times a week in New York, Boston, Seattle and San Francisco. Plus, there’s an emerging Groupmuse community in Rochester, and one-off international events have also sprung up in South Korea, Portugal and Germany. 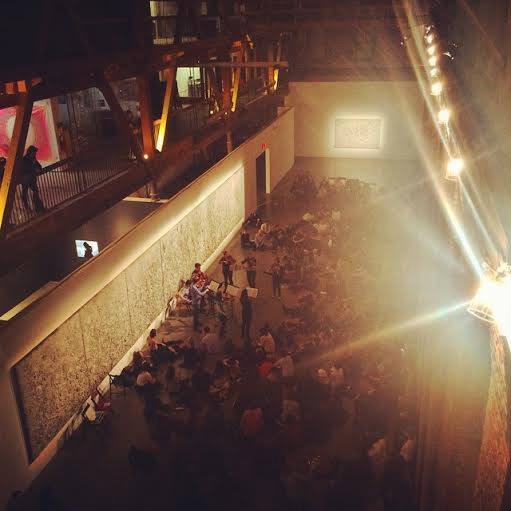 While the Groupmuse team derives no profit from these prolific house shows, larger scale events and concerts commissioned by corporate offices pay the bills and pull in the cash necessary to make the platform more sustainable in the future. There are two such “Massive Muses” happening right here in Brooklyn soon: Tonight, Thursday, Feb. 26, at the Green Building in Gowanus, Groupmuse will pair dance and visual art with a classical program; and on Friday, March 20, its team will host an opera at Pioneer Works in Red Hook. The opera—Mozart’s Schauspieldirektor—is a 25-minute-long work sung in German, with English narration. You’ll have the opportunity to marvel at the musicians and the space’s current art installation, Living Room Index and Pool, an exhibition of large sculptures that will surround the opera singers at the event. Plus, Matthew Aucoin, the 25-year-old assistant conductor at the Metropolitan Opera, will serve as conductor for the night. Both these upcoming events are ticketed and (sadly) not BYOB.

By making classical music accessible to an entirely new (and younger) audience, Groupmuse has provided an option for folks who may be disenchanted with the bar scene and in search of something else. Beyond the social factor, they’ve imagined a new way for this art form to remain relevant in a world where aimlessly streaming Spotify singles is the norm at most social gatherings. Best of all, it saves you a schlep to Carnegie Hall.