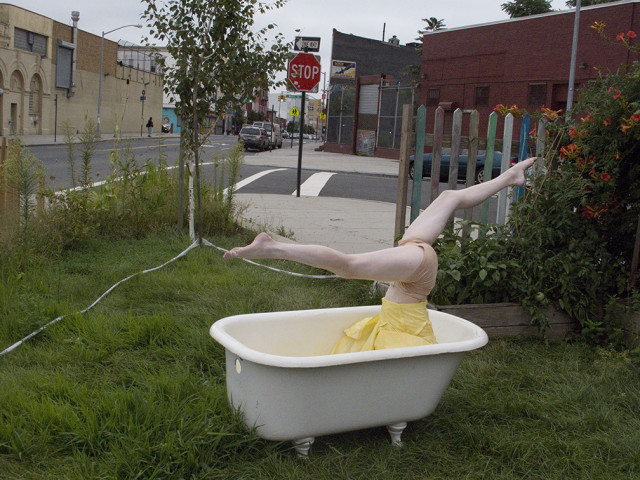 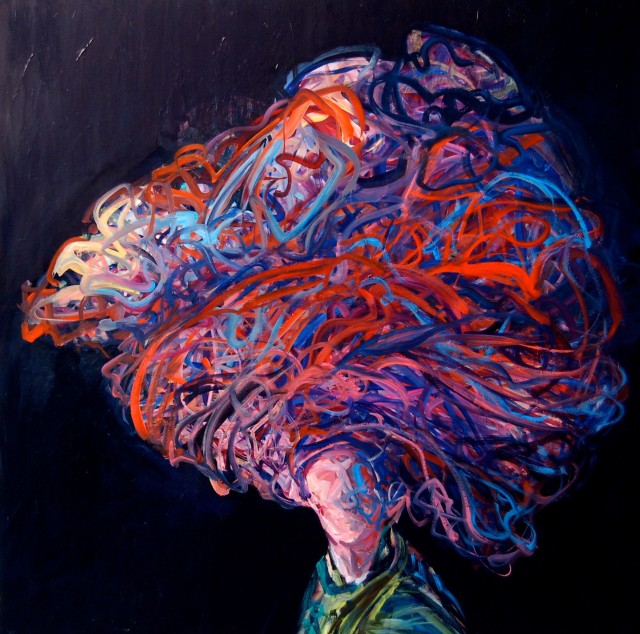 When Bushwick artist Deborah Brown thinks back to the early meetings for Bushwick Open Studios, which celebrates its ninth anniversary this weekend, she marvels at the fact that just “a small group of committed idealists” helped created today’s immense, annual festival that brings together nearly 1,000 registered artists and 500 art spaces for the public to view.

Now, says Brown, “Bushwick Open Studios is one of the most visible manifestations of our collective energy and strength as an art community. The festival is a celebration of what we have created as artists working together.”

Since it’s overwhelming to consider visiting every studio and seeing every performance, exhibition, and special event this weekend–which includes everything from a live show with rapper Fat Joe at the Bushwick Collective Block Party to a showcase of indie video games like “Filthy Chicken”–start with these five shows and see where the weekend takes you.

There’s a lot going on in Moldy Figs, a new sculptural installation at Momenta Art. Artist Justin Randolph Thompson has woven symbols and tropes of the African-American experience into this multi-seat shoeshine, which rotates in merry-go-round fashion. During a live performance on Saturday between 4 and 6pm, Thompson will gold-leaf participants’ shoes to classical and jazz music compiled by his brother, Jason Thompson, and visuals by multi-media artist Bradly Dever Treadaway. 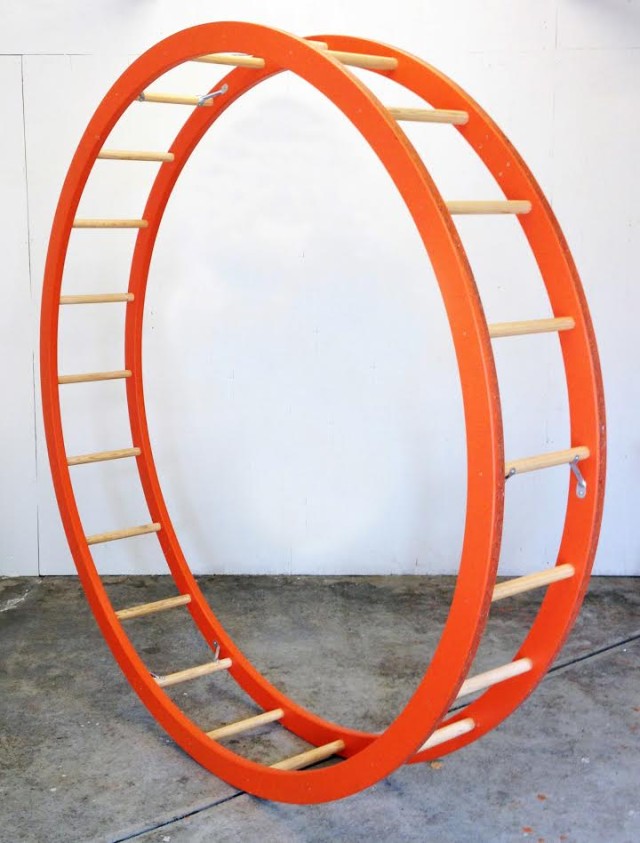 Steve Rossi’s “Reciprocal Ladder to Roll” (and Instagram) will be on view at Home Improvement.

On view at Deborah Brown’s gallery, Storefront Ten Eyck, is the group show Re/Post, along with work by painters Drew Beattie and Ben Shepard, and Brown’s own lush oil paintings. But what I’m looking forward to most is Home Improvement, a group show curated by Brown and Lesley Heller on a one-block stretch of Rock Street. This is the third time the Boar’s Head Company has opened this private street between Morgan and Bogart to BOS, and this year 18 artists have created sculptures around the theme of home, such as Steve Rossi’s “Reciprocal Ladder to Roll.” Catch a live performance on Saturday June 6, 6-9pm by Dr. Zizmor (the band, not the doctor), and performances by artists in the show on Sunday between 4:30 and 6pm. 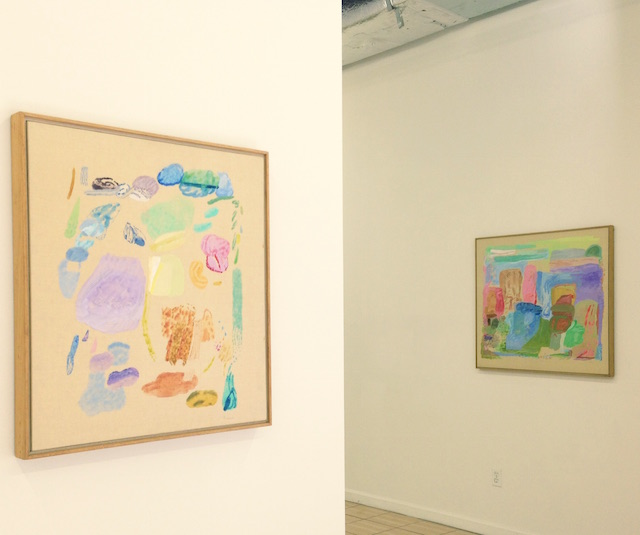 Jason Andrew, a stalwart of the Bushwick art scene, and a co-director of Outlet Fine Art, wanted to do something very special for BOS, and chose to feature the expressionistic paintings of 80-year-old artist Judith Dolnick, a prominent abstract artist in the 50s and 60s. “It’s her return to New York,” said Andrew. During her last solo show in NYC in 1987, The New York Times called her work the answer to “Matisse, Kandinsky and Dufy.” Outlet describes her current paintings in her first solo exhibition in NYC in three decades as “bright daydream fantasies.”

Rafael Fuchs will be showing prints, like the one above, from videos documenting the Bushwick art scene at Fuchs Projects this weekend. Image: Rafael Fuchs

This past Saturday, while touring the art studio of the glowing and spirited Israeli photographer Rafael Fuchs, I realized that Bushwick Open Studios is as much an art festival as it is a celebration for artists who have had to fight for gallery space to showcase their art. In the last few years, Fuchs was turned down by three different landlords who wanted a more profitable tenant, like a restaurant, rather than his art gallery, Fuchs Projects, which ultimately found a home at 56 Bogart St. This year, Fuchs Projects is highlighting Cynthia Sparrenberger and also work by Fuchs  himself. On Friday night you’ll find free wine and beer, and all weekend long, Fuchs will be taking photos of attendees. 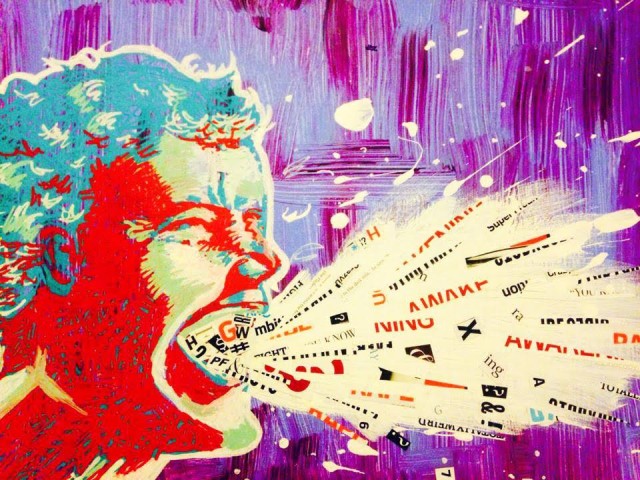 Bianca Romero, “Something to Say,” part of the group show at Shwick Market.

This is the first year Shwick Market, a tiny “market of makers,” is participating in BOS, with a group show called 10 Artists, 1 Studio. My particular favorite is emerging local artist Bianca Romero, who found her voice among painters and street artists in Brooklyn. You’ll see her NYC-inspired collages, a tradition she brings from her live painting shows at The DL on the Lower East Side.

For more highlights from Bushwick Open Studios, check out these guides from Artnet and Hyperallergic. You can find more events and open studios at artsinbushwick.org, and winnow down your options with filters like “free drinks” and “child-friendly.”

Leave a Reply to Matt miller