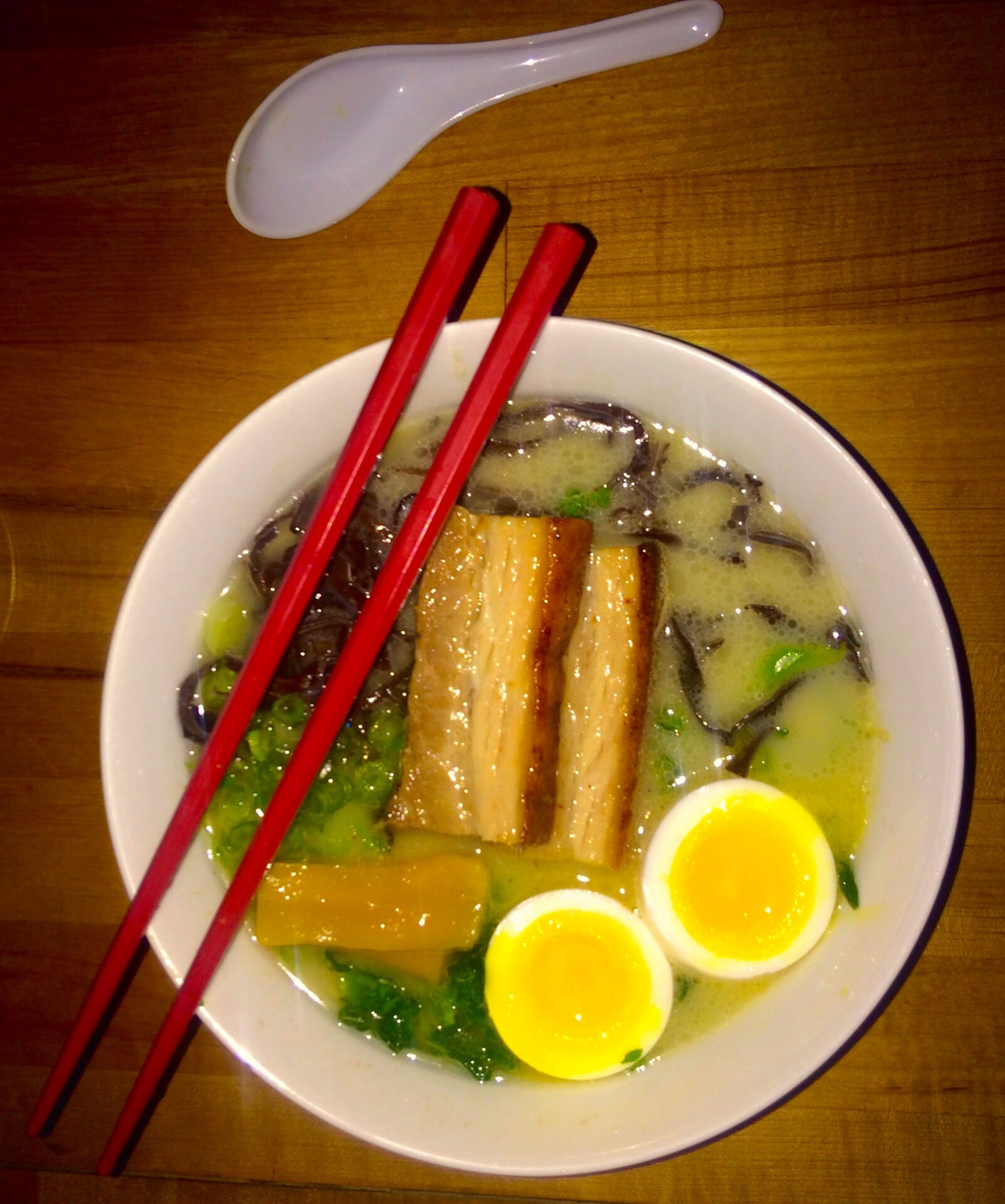 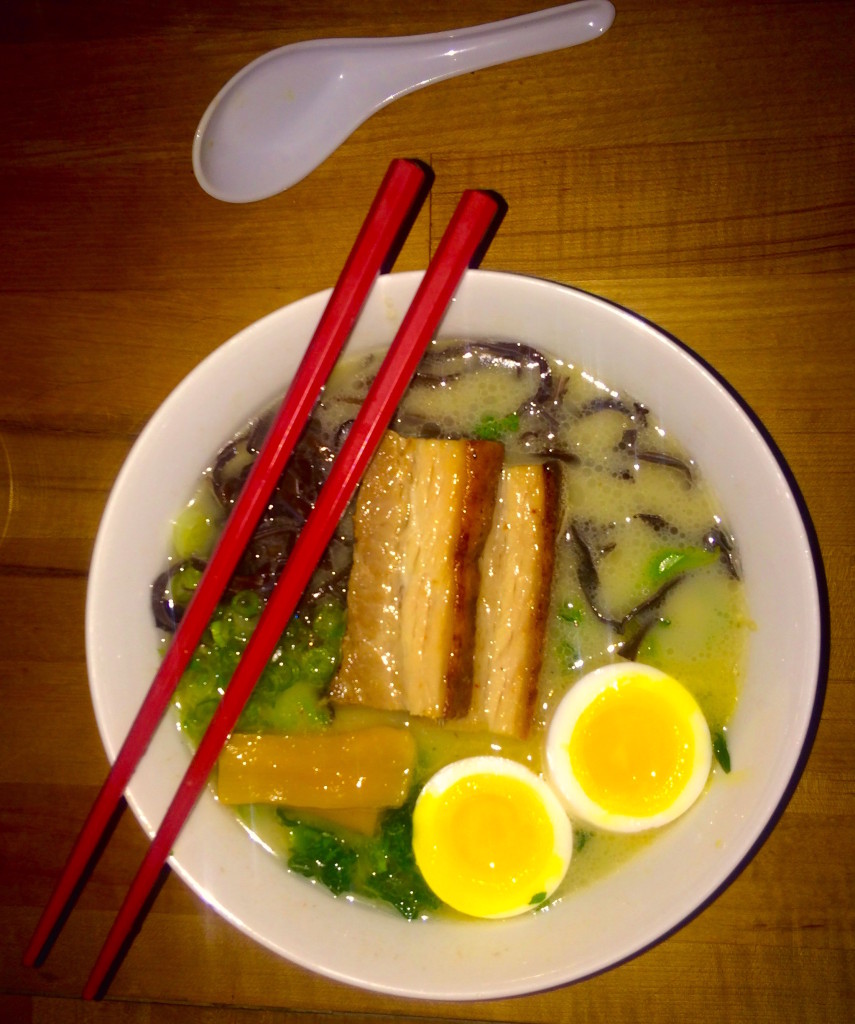 There was a time when going out for Japanese food meant you were either in the mood for sushi or ramen. Over the past few years though, a whole host of new Japanese restaurants have opened around Brooklyn, serving everything from yakitori to omakase. From the type of noodles to the style of service, specificity is key. Familiarity with the different cuisines is just as important, so you don’t show up to a restaurant in the mood for sushi when the specialty is grilled fish.

My own experiences with Japanese food and culture began at the age of nine, when my family moved to Tokyo from New Jersey with six weeks notice. After a bumpy transition involving many trips to McDonald’s and a loyalty card at Baskin Robbins, I opened up my picky palate to more than California rolls and yakitori–grilled chicken skewers, or a restaurant serving grilled skewers of all kinds, which had been introduced to me as being “like Costco frozen chicken fingers, but better.” The umami-centric restaurants currently setting up shop in New York remind me of meals from my childhood, and it’s exciting to see all the ways in which Brooklyn dining is going beyond kale salads and Edison bulbs. Here’s a guide to eating Japanese in Brooklyn, meant in no way to be exhaustive, simply representative of what the borough has to offer. 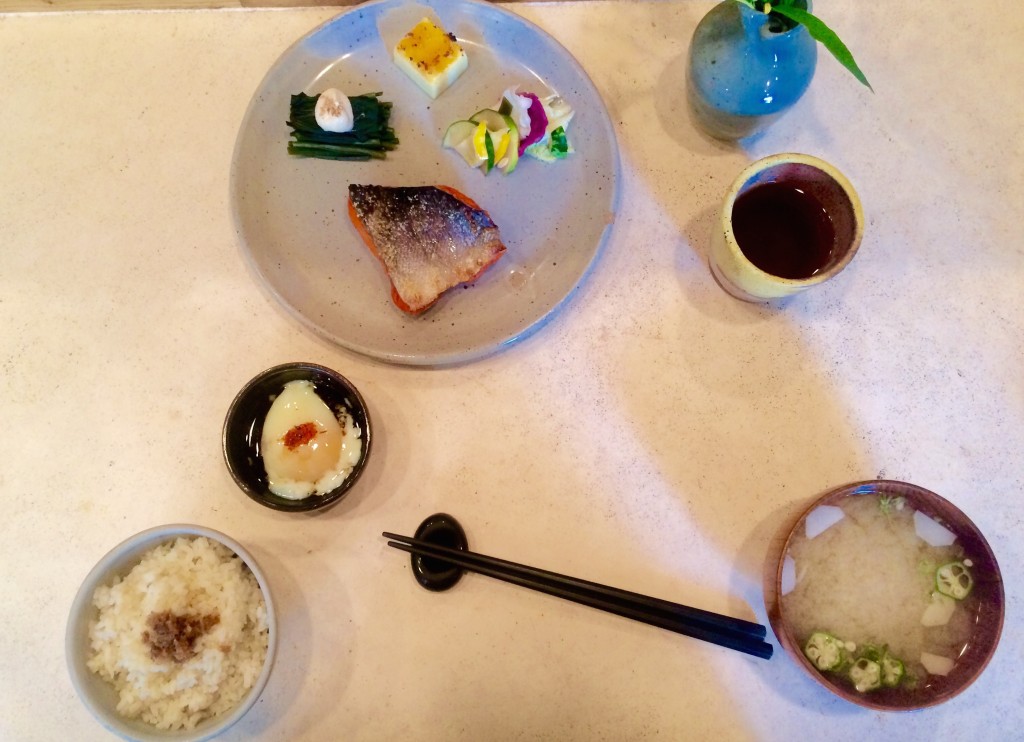 Okonomi
Neighborhood: Williamsburg
Type of food: Traditional Japanese breakfast
What it’s like: When I walked into Okonomi at 2pm on a Friday it took a minute to remember that I wasn’t actually in Japan. Everything about the 12-seat restaurant made my dining companion, my mom, nostalgic for Tokyo—ceramic rice bowls, the sliding wooden bathroom door, and the teensy portion sizes. Not to mention, of the six diners, we were the only ones not speaking Japanese. The omakase (basically chef’s choice) menu, ranging from $12 to $20, is a traditional Japanese breakfast consisting of locally-caught grilled fish, pickled vegetables, brown rice, miso soup, and two wildcard sides, like a baked custard or sautéed greens of a mysterious, longevity-encouraging, variety. Pro-tip: Order the poached egg ($2) to mix with your rice.

Chuko Ramen
Neighborhood: Prospect Heights
Type of food: Ramen
What it’s like: Even at 10pm in the midst of a lethargic heat wave, there was a 20-minute wait to be seated at Chuko, a ramen-ya on Vanderbilt Avenue with an izakaya (Japanese bar food) location across the street. The simple menu fulfilled my basic but essential requirements for good ramen: a steamed pork bun to remember and miso broth with an egg on top. And though I don’t usually feel the need to begin a ramen meal with greens, my neighbor’s kale salad—mixed with crunchy fried kale and raisins, heartily dressed in miso, and topped with sweet potato strips—looked too good to forgo. And it was. In an effort to leave no morsel behind, I had to ditch my chopsticks and finish the salad with my fingers.

Sushi Katsuei
Neighborhood: Park Slope
Type of food: Sushi
What it’s like: Generally speaking, sushi restaurants in New York fall into one of two categories: a factory-like operation serving Americanized rolls, or a four-star experience that requires a deep dig into your pockets and a commitment to the chef’s tasting menu. Sushi Katsuei, I’m proud to report, offers a happy medium. The crowd at this neighborhood gem is a mix between Park Slope families sharing shrimp shumai and spicy tuna rolls (creamy without the typical excess of mayonnaise) and couples dining omakase-style at the sushi bar, helmed by three legitimate chefs, professional in both experience and dress (white coats and neckties). The portions are small, as they should be, so savor every last bite.

Ganso Yaki
Neighborhood: Downtown Brooklyn
Type of food: Street food and izakaya
What it’s like: My first impression upon walking into Ganso Yaki, an offshoot of the downtown Brooklyn ramen-ya of the same name, was that it smelled delicious. This is a very casual spot that serves anything that can be classified as Japanese street or comfort food, like tempura, yakitori, and homemade soba noodles. A block away from the Barclays Center, the space is roomy and ideal for dining in groups—the wooden booths are practically inviting you to stay a while and taste everything on the menu. Not to mention, there’s a great happy hour with $4 Sapporo and $5 bites.

Cherry Izakaya
Neighborhood: Williamsburg
Type of food: Izakaya
What it’s like: If Ganso Yaki is casual, then Cherry Izakaya, which opened a little over a year ago between Berry and Bedford, is sleek, which shouldn’t come as a surprise given that it’s the Brooklyn sibling of the glitzy Meatpacking District spot, Cherry. It repurposes the izakaya bar food trend with an upscale fusion angle, serving small plates like chicken wings with yuzu, miso-marinated sea bass skewers, and pork gyoza. It’s a good spot if you’re “craving Japanese” (the menu also includes ramen, sushi, and sashimi) and also want the buzzy ambience of Williamsburg’s main drag.

Okiway
Neighborhood: Bushwick
Type of food: Izakaya
What it’s like: Granted, okonomiyaki, a savory pancake that translates to “grilled as you like it,” has been sprouting up with every new izakaya in the city (it’s also on Ganso Yaki’s menu), but the recent opening of Okiway, a Japanese bistro dedicated to the speciality, blew my mind. My dad once tried to introduce me to okonomiyaki at a train station diner counter in Hiroshima, which along with Osaka is said to be the dish’s hometown, but I couldn’t wrap my head or tastebuds around the layers of cabbage and pork masquerading as a pancake. Fast forward 15 years and I couldn’t wait to get myself to Bushwick to see what I had missed out on. Owned by Japanophile hairdressers Vincent Minchelli and Amanda Jenkins, Okiway serves a hipster-filtered version of Tokyo street food, and though traditional Hiroshima and Osaka style pancakes are served, you’re encouraged to build your own with offbeat toppings like octopus, chorizo, cheese and mochi. No matter what you get, try to snag a seat at the teppanyaki counter to get in on the griddle action.