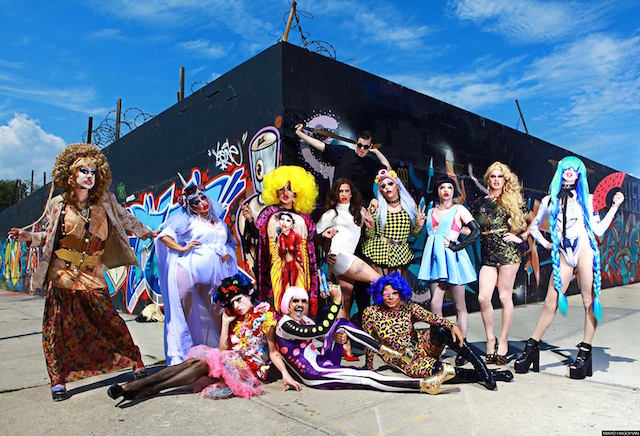 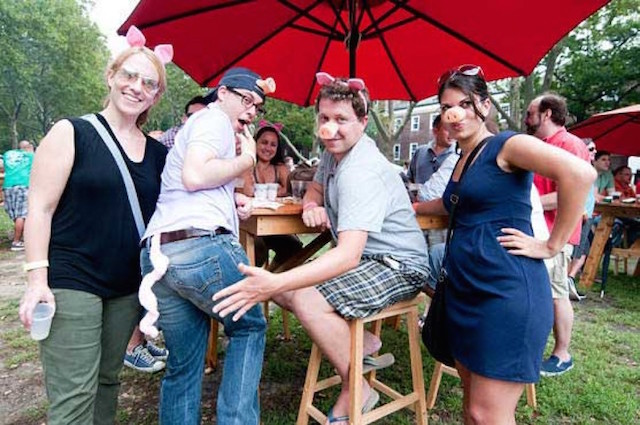 Pig out in a big way at Pig Island, which is landing in Red Hook this year on Saturday. Photo: Pig Island

Well folks, it’s Wednesday again, and you know what that means: It’s time again for Your Ideal Week, our roundup of the best parties, shows, classes, readings, and other ways to keep yourself busy in and around Brooklyn for the next seven days. Although there’s never any shortage of action to cull from around here, it’s a big borough and there are bound to be things that slip under our radar, so if you have an event that you think people would really dig, you should always feel free to drop us a line at tips@brooklynbased.com.

After last night’s debut of the new Late Show, you’d think that Colbert would have enough on his plate, but I guess the guy can always make room in his schedule for sci-fi/fantasy geekery. On the heels of his interview with George Lucas at the Tribeca Film Festival in May, Colbert is planning to host J.J. Abrams in conversation at Newark’s NJPAC on Nov. 21. Tickets to Stephen Colbert vs. J.J. Abrams: Celebrity Nerd-Off! go on sale this Friday at 10 am, and if you are interested you should snap them up asap before they sell out.

There is a lot going on food-wise this week, and you probably won’t be in a bathing suit again anytime soon so it’s as good a time as any to partake. Taste Talks, an event-laden celebration of food and chefs, returns to Williamsburg this weekend with special guests like Questlove and Dominique Ansel. This year’s lineup includes highlights like a chicken & waffles brunch, an all-star panel on female voices in food, and a live taping of NPR’s The Sporkful. You can also sample signature dishes from a slew of top North Brooklyn restaurants at Taste Williamsburg Greenpoint, a foodie extravaganza being held in the East River State Park from 1-5pm on Sunday. Ticket packages start at $35, and proceeds benefit The Northside Town Hall.

If it’s pork you’re after, the annual Pig Island bacchanalia descends on Red Hook’s Erie Basin Park this Saturday. For $85, you get all-you-can-eat swine dishes prepared by a top-notch group of pitmasters and chefs, plus all-you-can-drink beverages from Sixpoint brewery, local New York state vintners, and a whiskey tent.

From our perspective, though, the place to be on Saturday is our own East Williamsburg Immersion, which is sadly the last of the season! As always, a $25 ticket buys you lunch, Brooklyn Brewery beers at four different watering holes, and a packet of awesome deals on clothes, home goods and treats from local boutiques. Come spend the day with us before heading west to the 90s Fest Music Festival at 50 Kent later that evening–you might need a few drinks in you if you’re really going to hear Smashmouth play all of its hits live in 2015.

Finally, to end on a somber note, this Friday is the 14th anniversary of the September 11 attacks. No matter where you were on that awful day in 2001, as a New Yorker, the legacy of it is a part of you. How to observe the anniversary and reflect on what happened is a personal choice, but the idea of turning the ominous date into an annual day of good deeds and service to the community is an idea that resonates with me. If you want to volunteer but don’t know where to start, New York Cares has some good ideas listed here.

And now without further ado, here is how to make the most of the next seven days: 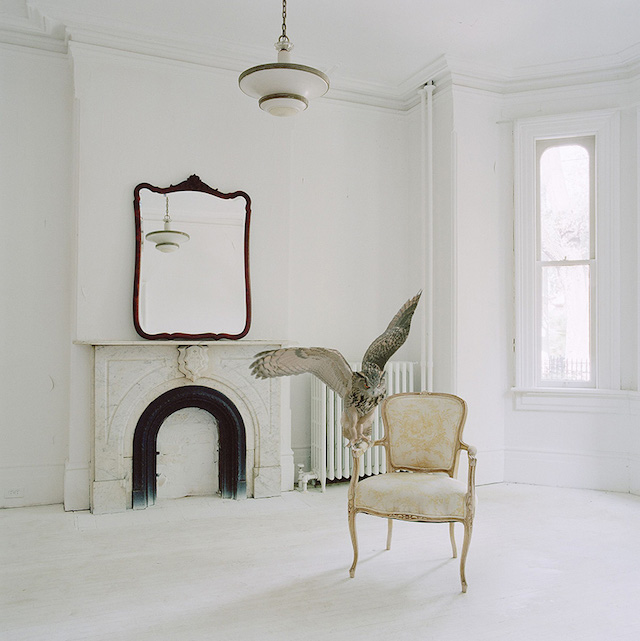 Sure, most of us will probably never own artwork that will one day hang in the Met above a plaque that reads “Donated by the Estate of [Enter Your Name Here],” but that doesn’t mean we shouldn’t start collecting! The Affordable Art Fair, which features hundreds of pieces priced between $100 and $10,000, means that we really don’t have a good reason for why those tired posters from college are still hanging on our walls. The show will set up camp at Midtown’s Metropolitan Pavilion for three full days of art-buying, eye-opening tours and talks, and food & drink. Doors open at 11am every day starting on Thursday, and there will be art on display in all mediums from more than 70 local galleries, a live art exhibition by artist Shantell Martin, drawing workshops for kids, a silent auction, and an exhibition of gifted young creatives (for those looking to invest on the ground floor). Tickets are $10 for students and seniors, $18 for adults, and free for kids. Or, if you want to save your dough to apply towards the purchase of a piece of art, drop by on the 14th between 6pm and 8pm, when admission is free. –N.R.

Bushwick and Ridgewood are hosting a weekend-long festival of drag shows, live music, and late-night parties as part of Bushwig. Photo: Bushwig

Get your sky-high heels and glitter ready– this Friday marks the return of Bushwig, a weekend-long festival celebrating the best of Brooklyn’s drag culture and music, and it sounds like a truly epic party. The Bushwig Ball kickoff event runs from 10pm-4am at Lovegun, which is the best place to pick up your $40 weekend pass/wristband.  All day on Saturday and Sunday, Ridgewood’s historical Onderdonk House will host a lineup of cutting-edge, gender-bending shows featuring 150 drag queens and 20 live musical acts like Chae Buttuh and Mr. Twin Sister. But make sure you get your beauty sleep this week, because it sounds like the real action will be at the official Saturday night after-parties that will be raging until the wee hours at venues throughout Bushwick and Williamsburg. –K.H.

Hear feminists, writers, and comedians discuss the Kardashian phenomenon after they’ve tied one on at a special Kim-themed Drunk TED Talk at Littlefield on Saturday. Photo: Drunk TED Talks

Some would say that America has talked too much about the infamous Kardashian clan, but the real question is whether or not we’ve gotten enough smart, kinda famous people drunk and made them talk about Kim in front of crowd. This weekend, the Drunk TED Talks series, which bills itself as the world’s premiere source of highly intelligent people talking about weird stuff they care deeply about while extremely drunk, will face that question head-on with Is Culture Keeping Up With The Kardashians? A Kimposium. Starting at 2pm, head to Littlefield for an afternoon of earnest (and not sober) discussions like “Dat Ass Dough: Backing Up the Monetization of Kim’s Butt,” a talk led by SNL featured player Sasheer Zamata, to Rookie Mag staff writer Gabby Noone’s “Kris Jenner: Hollywood’s Most Successful Dance Mom.” Finally, the event will end with a panel discussion on whether we as a society have kept up with the Kardashians.Tickets are $5, which is an absolute steal for the knowledge that will be dropped on the audience. –N.R. 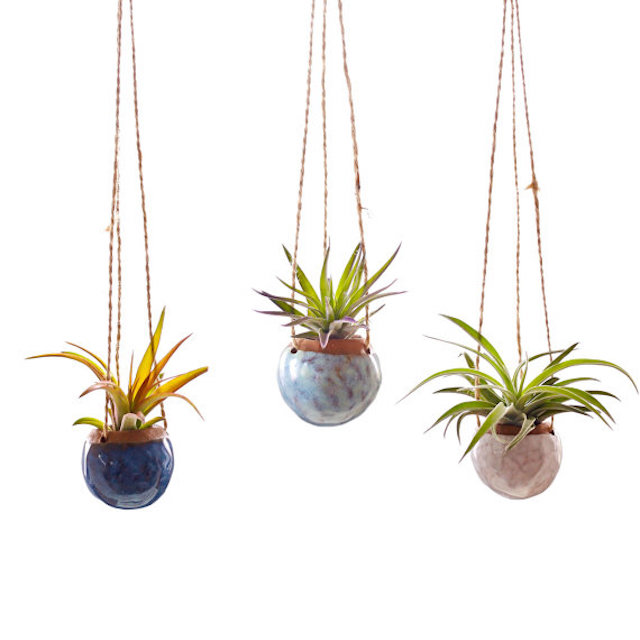 Cor Pottery, who makes these hanging pots, is just one of the 200 indie vendors who will be selling handmade wares at the Renegade Craft Fair this weekend. Photo: Cor Pottery

If the arrival of fall has you feeling acquisitive, the Renegade Craft Fair at the Brooklyn Expo this weekend is an excellent source of indie jewelry, textiles, ceramics, paper goods and more. The event is free to enter and boasts stalls from over 200 carefully selected makers, local food  vendors, and fun miscellany like photo booths and hand-drawn portrait stations. Get a head start on holiday shopping or just treat yourself to some unique, handmade presents to celebrate fall. The fair runs between 11am and 6pm on both Saturday and Sunday, so there’s plenty of time to fit a driveby into your busy weekend schedule. The full roster of participating vendors is available here. –K.H. 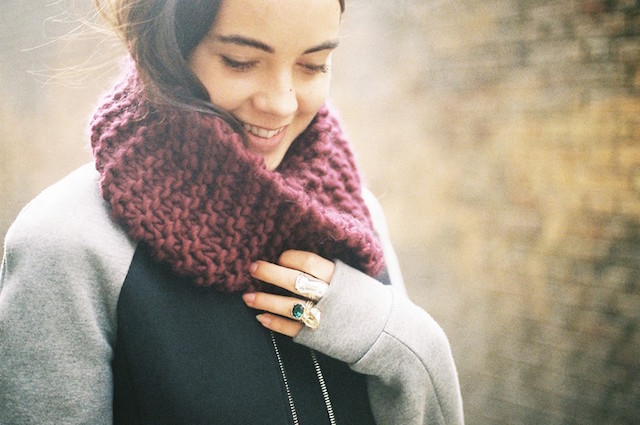 If you have 2 hours and $40, you can learn how to knit a snood on Monday night. Photo: Wool and the Gang

Remember wool hats, scarves and gloves? You wouldn’t know it from the weather around here, but you’re going to need to revisit those guys again in the not too distant future. We’re willing to bet that at least some of your supply didn’t survive the interminable frigid ordeal known as February 2015, so why not replenish your stock with a brand new snood (apparently that’s the British word for one of those circular wool scarves that you can also wear as a hood)? The best part about this snood (other than the fact that you get to call it that) is that you are going to knit it yourself! No excuses about being all thumbs, please– there’s absolutely no experience required. Wool and the Gang, an awesome organization dedicated to teaching people to knit, will provide wool, needles, patterns, and hands-on instruction at the Get Your Knit On party it’s throwing at Noorman’s Kil from 7-9pm on Monday. All that, plus a finished product to keep you cozy all winter, for the price of a $40 ticket. And if you can’t make it this week, there are a bunch of similar events coming up around town. –K.H. 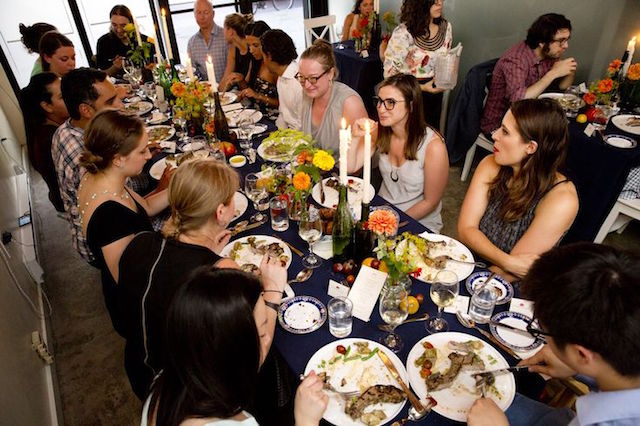 Betty Brooklyn is hosting another tasting dinner featuring locally-sourced ingredients, and this one is all about Southern food! Photo: Josh Strauss

A New Yorker is never far from some good Southern cuisine, but that will be especially apparent this Tuesday night at Betty Brooklyn’s Contemporary American Southern Cuisine Dinner. The dinner is part of a tasting series in which the Crown Heights-based catering company showcases the bounty of local farmers. In this installment, lucky guests will get to dig into all the delicious Southern food you can dream up, like drop biscuits with honey butter, boiled peanuts, crab-stuffed deviled eggs, house cured ham, grilled okra salad, buttermilk fried chicken & gravy, collards, and a hefty helping of peach cobbler with vanilla ice cream. All food will be provided by Rustic Roots, a local farm delivery service, while Tipsy provides wine pairings for an extra $25 per person. Buy your tickets here; the hootenanny begins at 7pm. –N.R. 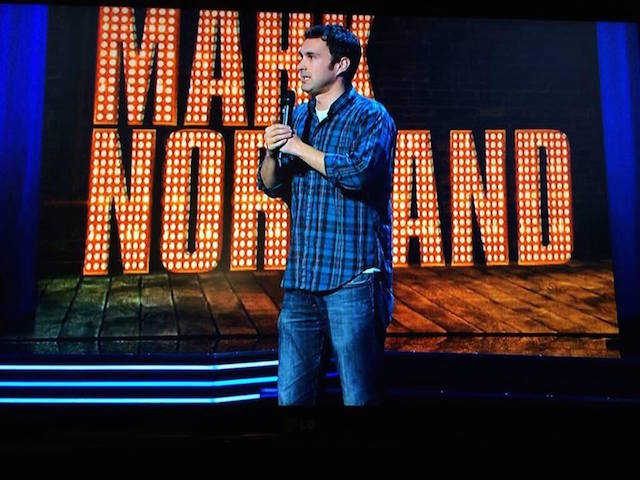 Mark Normand is performing with a list of stellar comics at Funny Moms, a new show at Berg’n on Wednesday nights. Photo: Mark Normand

Crown Heights beer and food mecca Berg’n has a new weekly comedy show called Funny Moms, which takes place every Wednesday at 8pm and is hosted by Adam Friedland and Sara Armour. Although I haven’t personally made it out to catch a show yet, this week’s lineup provides a pretty excellent point of entry. Some really funny rising stars are on the bill, like Mark Normand, who has his own half-hour Comedy Central special, and Greg Johnson, a longtime staple in the NYC standup scene, so it’s bound to be a night full of laughs. Entry is free but you should bring some cash so you can take advantage of the opportunity to eat Mighty Quinn’s bbq for dinner without hauling yourself all the way to the East Village. –K.H.