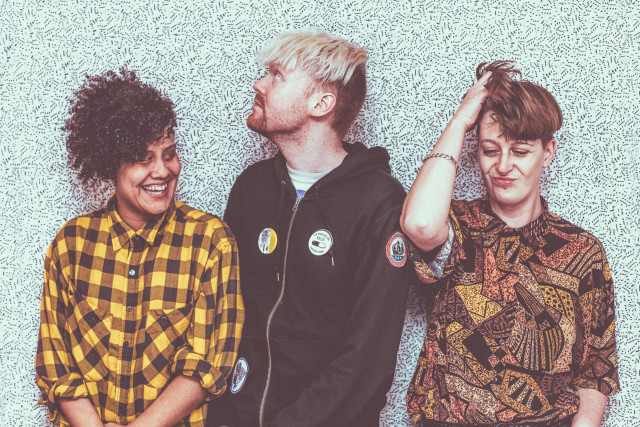 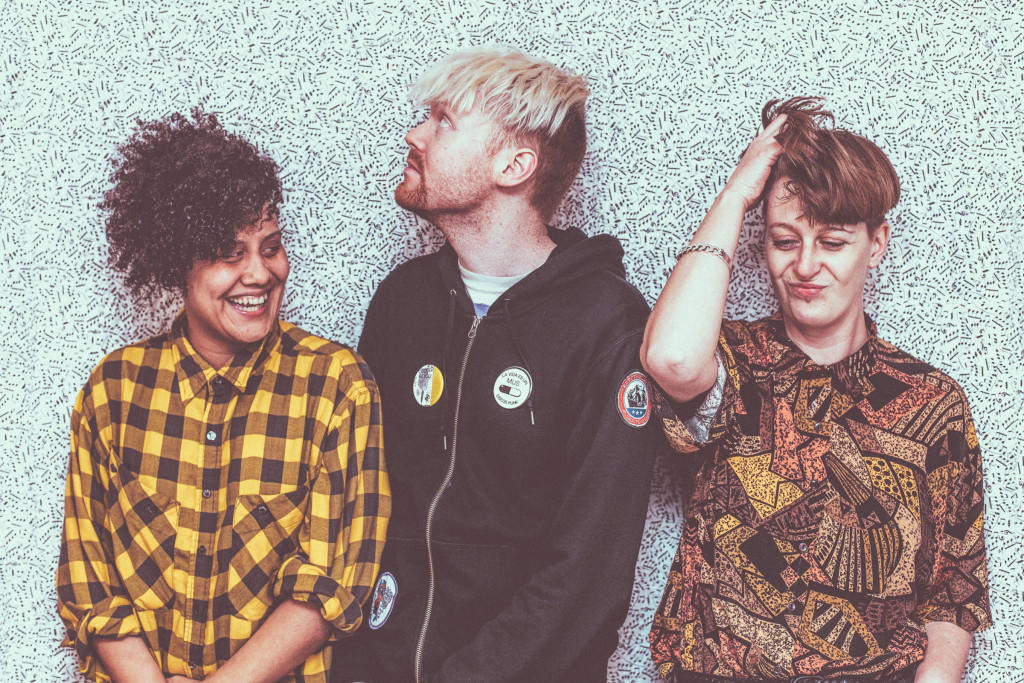 When you listen to the band Shopping, a trio based in London, you can’t help but feel transported to the late ’70s post-punk scene spearheaded by great British bands like the Slits, the Raincoats, and Gang of Four. Shopping’s songs have all the hallmarks of that era: choppy guitar, urgent bass lines, disco-like drums and vocals that are both detached and feisty.

I think when we play live we have a lot of fun no matter who’s there, how many people, or if they never heard of us before. We’re confident we can win people over.

Yet while the band’s drummer Andrew Milk acknowledges that Shopping was very much influenced by post-punk, he maintains it wasn’t an intentional effort on the band’s part to emulate that sound.

“We knew that we wanted to make dance music and we were a three-piece,” he says. “You got bass, drums, and guitar: guitar where Rachel [Aggs] can’t play chords, and drums where I can’t play drums except four-to-the floor dance beats. So it happened to be danceable post-punk. It had to be that sound.”

Formed three years ago, Shopping put out their debut album, Consumer Complaints, in America via FatCat Records this past spring; last week the band released its follow-up, the superb Why Choose. The band, Milk, guitarist Aggs, and bassist Billy Easter, has already performed in the U.K. and around Europe. They’re headed to the U.S. for their first-ever tour here, including a string of Manhattan and Brooklyn dates that coincide with CMJ.

Milk explained that the short turnaround between Consumer Complaints and Why Choose was intentional. “We all have part-time or very flexible jobs where we can take a lot of time off for touring and writing and practicing,” he says. “So we’re quite lucky that we’re able to do that and produce as much as we are producing. That’s how we wanted to work–get as much out in a short time as we could.”

“We’re pretty impatient,” says Aggs. “We would’ve gotten pretty bored if we released an album, waited for people to get into it, and then done a tour, and then done another album, and waiting.”

According to Milk, Why Choose is a continuation of the previous album, slightly bigger, but in the same style. The first song released from Why Choose is the energetic and jumpy “Straight Lines” with a rollicking guitar line and simultaneous lead vocals between band members. Milk views that track as a response to a previous song that appeared on Consumer Complaints.

“It was a big thing back then to have these answer-back records where an artist would do a song, and someone would be like taking the music–this is a girls perspective or this is a guy’s point of view. The first record had this song called ‘For Your Money’…where one member of the relationship was like, using the other, and then I just wanted to have that story told from the other side. That’s what ‘Straight Lines’ is.”

All three members of Shopping collaborate on the songwriting, according to Aggs. “They all kind of happen at the same time, although sometimes lyrics are added and changed afterwards. Most of the time I personally don’t change it. I say, ‘I’m gonna change things later,’ and never do.”

“Everything just comes together in the practice room,” Milk adds, “That’s why the lyrics are as straightforward and simple as they are because we’re very immediate, when we’re writing stuff, there’s an energy, and the lyrics just come out of that energy. That’s why a lot of the songs are about frustration and not wanting to wait, and stuff like that. It’s quite immediate.”

True to the punk DIY ethos, the band not only released Consumer Complaints by themselves, but they actually visited the record stores and brought copies of the albums. “It was fun though,” says Milk. “In the U.K., it’s not that big. If you’re gonna tour the whole of the U.K., you don’t have to set off at the crack of dawn, you got a bit of time to go around the town, you may as well go into the local shops and be trying to sell your wares, and that’s what we did. We toured extensively around the release of that first record, so it was quite easy be dropping things off.” 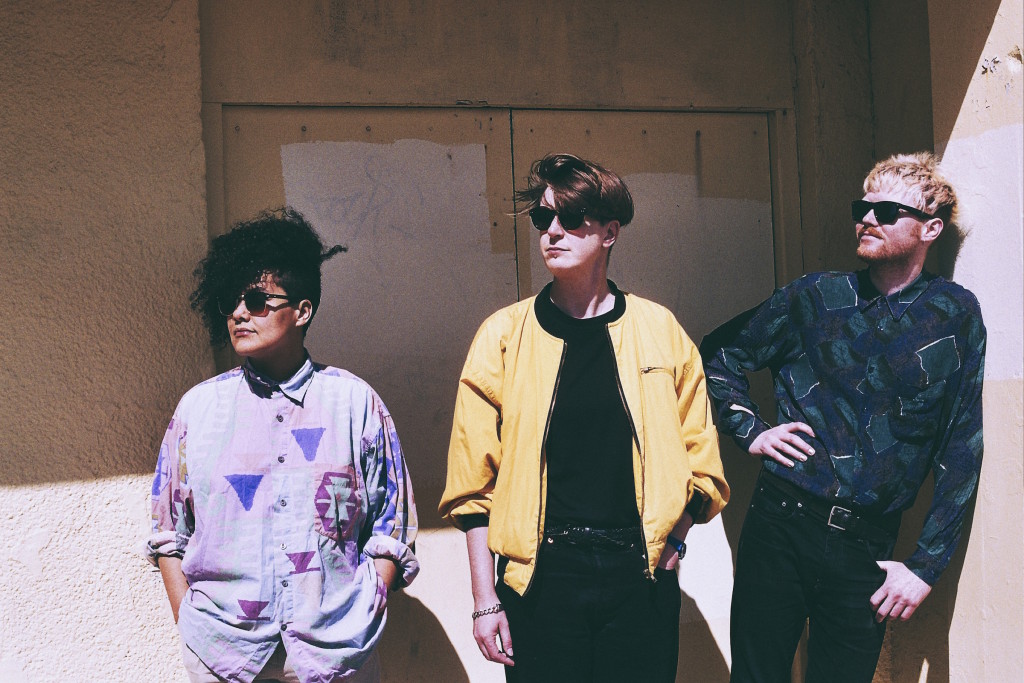 Given the fact that Shopping is still a relatively new band at least to American ears, it would appear the members have their work cut out for them, though they’re old pros at charming unsuspecting audiences.

“The first tour we ever did was a huge European tour that we had booked under the name of Cover Girl, our old band,” says Milk, “and we just basically turned up as Shopping and played as an entirely different band with different songs. So we’re used to winning audiences over. Hopefully that’s something we can do because it’s quite fun, dance music. And I think when we play live we have a lot of fun no matter who’s there, how many people, or if they never heard of us before. We’re confident we can win people over.”

As they get ready to tour the U.S. the band is looking forward to a new sort of challenge–real fans. “It’s kind of weirder when people do know the songs,” she says, “sometimes people sing along and I always get the words wrong. So it’s really intimidating when someone else knows the song better than you do.”

Shopping will be play a string of dates in Brooklyn and Manhattan: Oct. 12 at Elvis Guesthouse; Oct. 14 at Pianos; Oct. 14 at Santos Party House; Oct. 15 at Cake Shop; Oct. 15 at Rough Trade NYC; and Oct. 16 at Music Hall of Williamsburg. The band’s new album, Why Choose is out now.