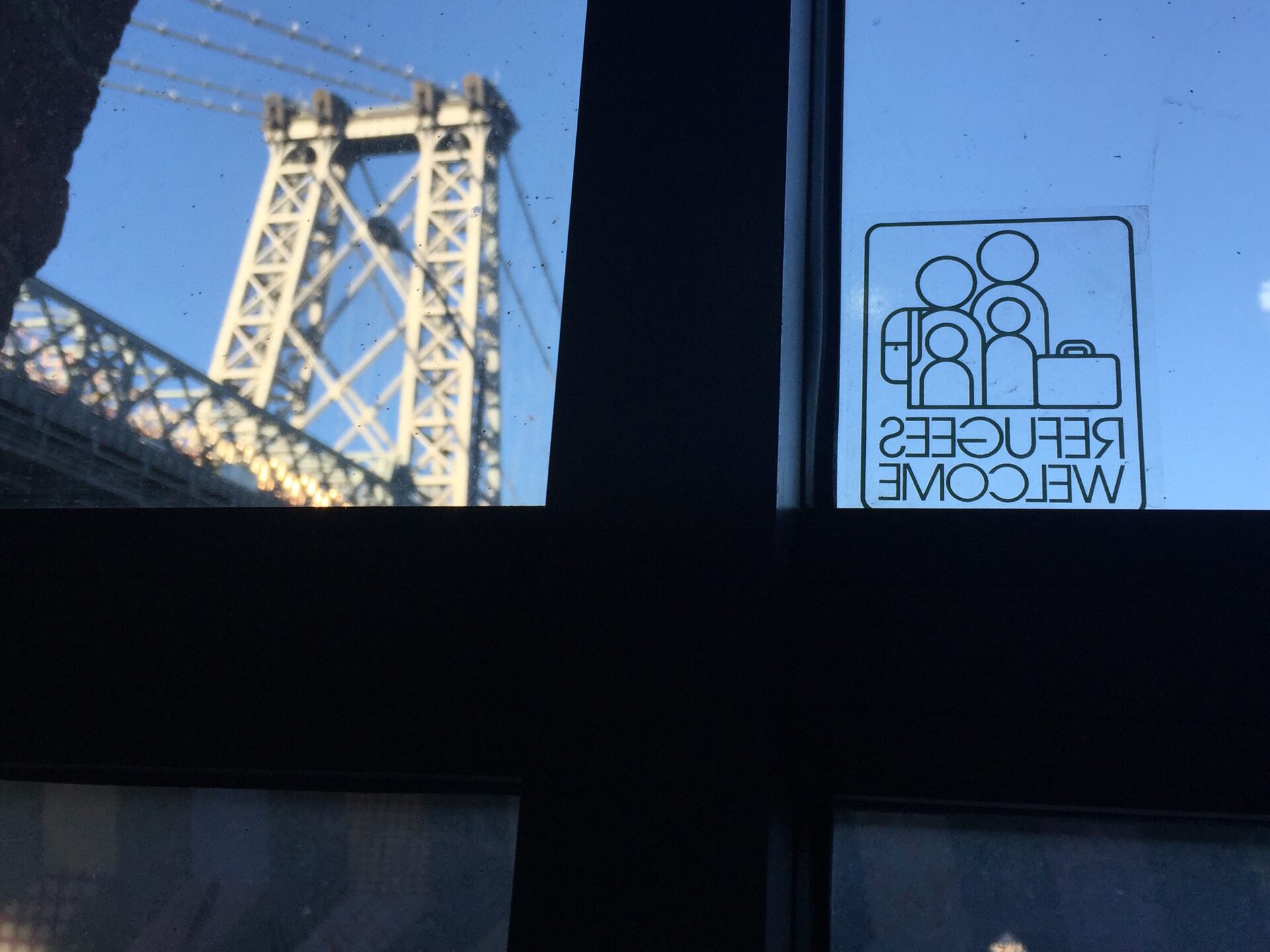 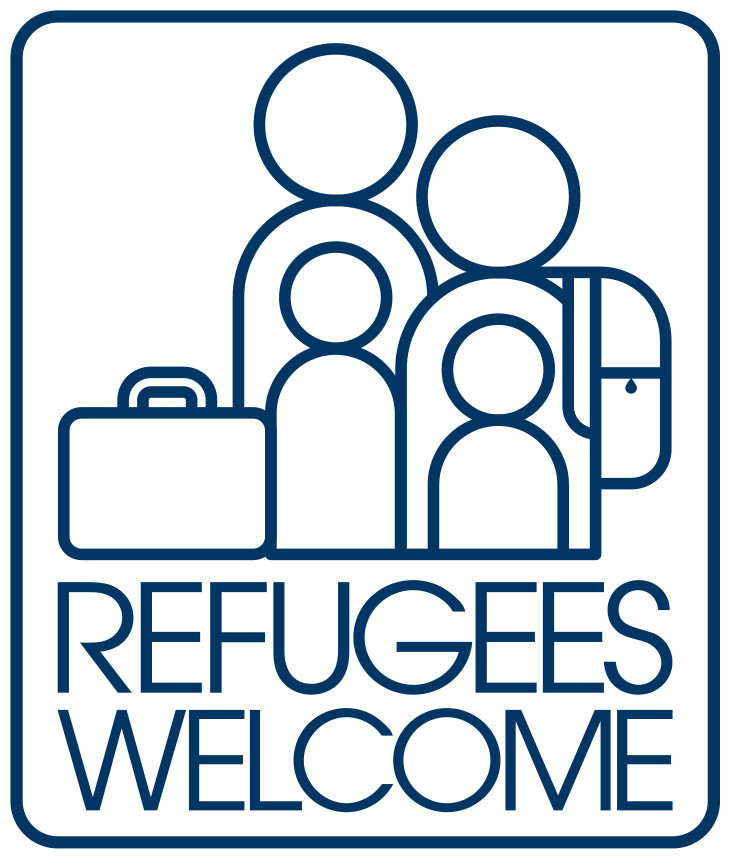 In an age where much of what we think of as social activism happens on Facebook, and simply changing your profile picture has the power to make you feel as though you’ve gotten involved in a cause, it seems almost retro for a grassroots campaign to flourish outside the confines of social media. Yet when they do go viral, offline campaigns really stand out. Such is the case with Refugees Welcome, a storefront sticker project created in response to the conversation surrounding the Syrian refugee crisis.

Veda Partalo, a Brooklyn-based advertising strategist, activist and Bosnian refugee, collaborated with Mike Davis and and Wes Winship, owners of Burlesque of North America, a Minneapolis creative studio, to create Refugees Welcome. The premise is simple–they designed a sticker intended for display in storefront windows and doors that makes it clear that refugees are welcome at that place of business. It’s a direct message of welcome, and a conversation starter. 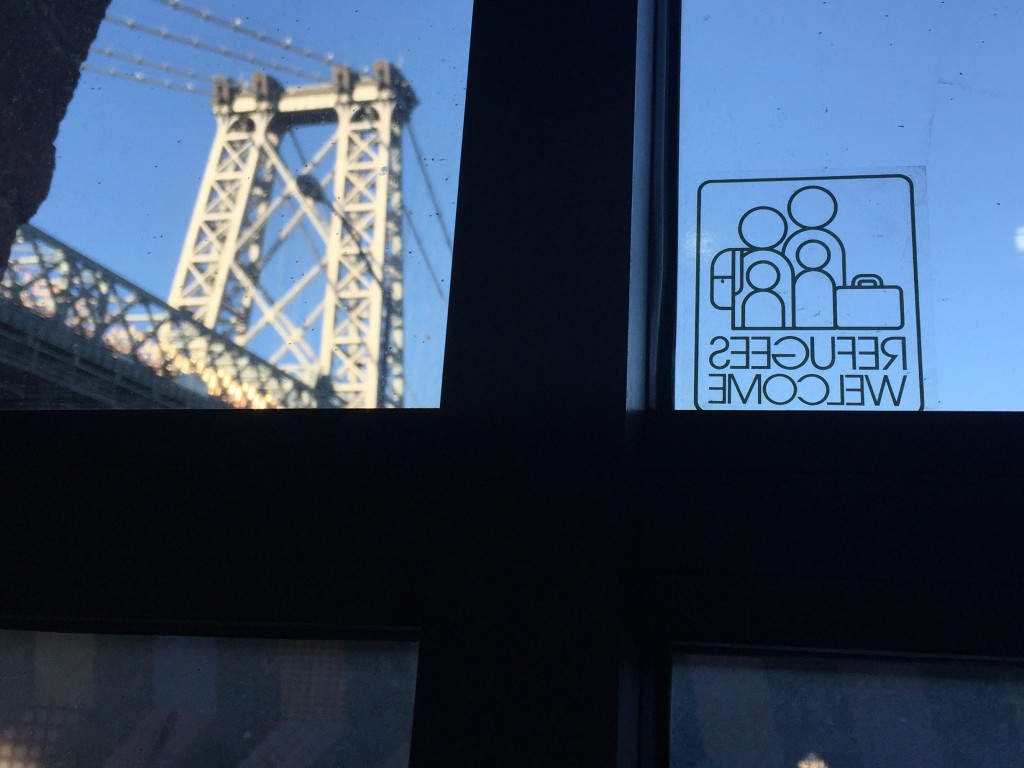 A sticker inside a home in Williamsburg. Photo: Refugees Welcome

The idea for the project came to Partalo this fall while she was organizing a coat drive in Minneapolis, where her family still lives, for new refugees–something she does annually to commemorate arriving there from Bosnia 19 years ago. Partalo put a call out for donations on Facebook. “It all started because of a troll,” she said. “I was writing a post to friends for extra support for the coat drive and I accidentally hit ‘public’ when I published it. I ended up getting some really weird and rude responses.” Those hateful messages made her flash back to her first days in America, and she realized how crucial the warm welcome her family received had been to their well being. ”I realized that my family and I are so embedded in American culture now because of the we way were received,” she told me. “Small gestures make a huge difference.”

Partalo wanted her own gesture to be physical, not digital. “Online campaigns, like changing your Facebook picture, are part of such a small bubble,” she said. “They don’t physically affect refugees. I wanted to do something that gave a real sense of welcome.” She talked to a few small business owner friends in Minneapolis about putting stickers in their storefront, and then reached out to Davis and Winship. Yes, you buy them online, but the campaign really happens in each individual window they’re placed in.

The result is a small, transparent sticker designed to be placed in a window that says “Refugees Welcome” beneath a family of four carrying a suitcase and a backpack. “I wanted to do something very straightforward and concise,” said Davis. “I love the pictograms designed for the 1964, ‘68 and ‘72 Olympics, as well as the international symbol signs found throughout airports. I wanted our stickers to speak to a wide audience…as soon as we started adding hijabs or long hair or glasses, we’d risk making anyone feel left out if their family didn’t exactly match the image shown. We want the sticker to be as inclusive as possible.”

That spirit of inclusion speaks to the diversity of the refugee population in the U.S. In the fiscal year 2015 (Oct.1, 2014-Sept. 30, 2015), about 1700 Syrian refugees were admitted to the U.S., out of a total of around 70,000 (the country with the most refugees admitted were Myanmar, followed by Iraq and Somalia). A few hundred Syrian refugees have settled in the New York City area. While 31 states have vowed to shut out Syrian refugees, New York is not one of them, and in New York City Mayor Bill de Blasio vowed to greet any Syrian arrivals with “open arms.”

The simple yet powerful message has reached far beyond the local Minneapolis businesses Partalo, Davis and Winship initially reached out to. Since the Walker Art Center first publicized the campaign last week, they’ve received almost 10,000 orders from businesses all over the country, and as well as from Australia, France and Sweden. New York buyers include Vine Wine, Champion Coffee [Talitha Whidbee, owner of both, is a friend of Brooklyn Based and turned us on to this story. –ed.], VH1, Openshop and the Communications Workers of America Labor Union. “I was afraid no one would want them!” said Partalo, who paid for the first batch of 500 stickers with her own money.  “It’s been really heartwarming to watch this project grow and to see how happy it’s making people,” said Davis.

Refugees Welcome stickers are available online at Burlesque of North America’s website, $2 for a pack of four and $5 for a pack of 20.