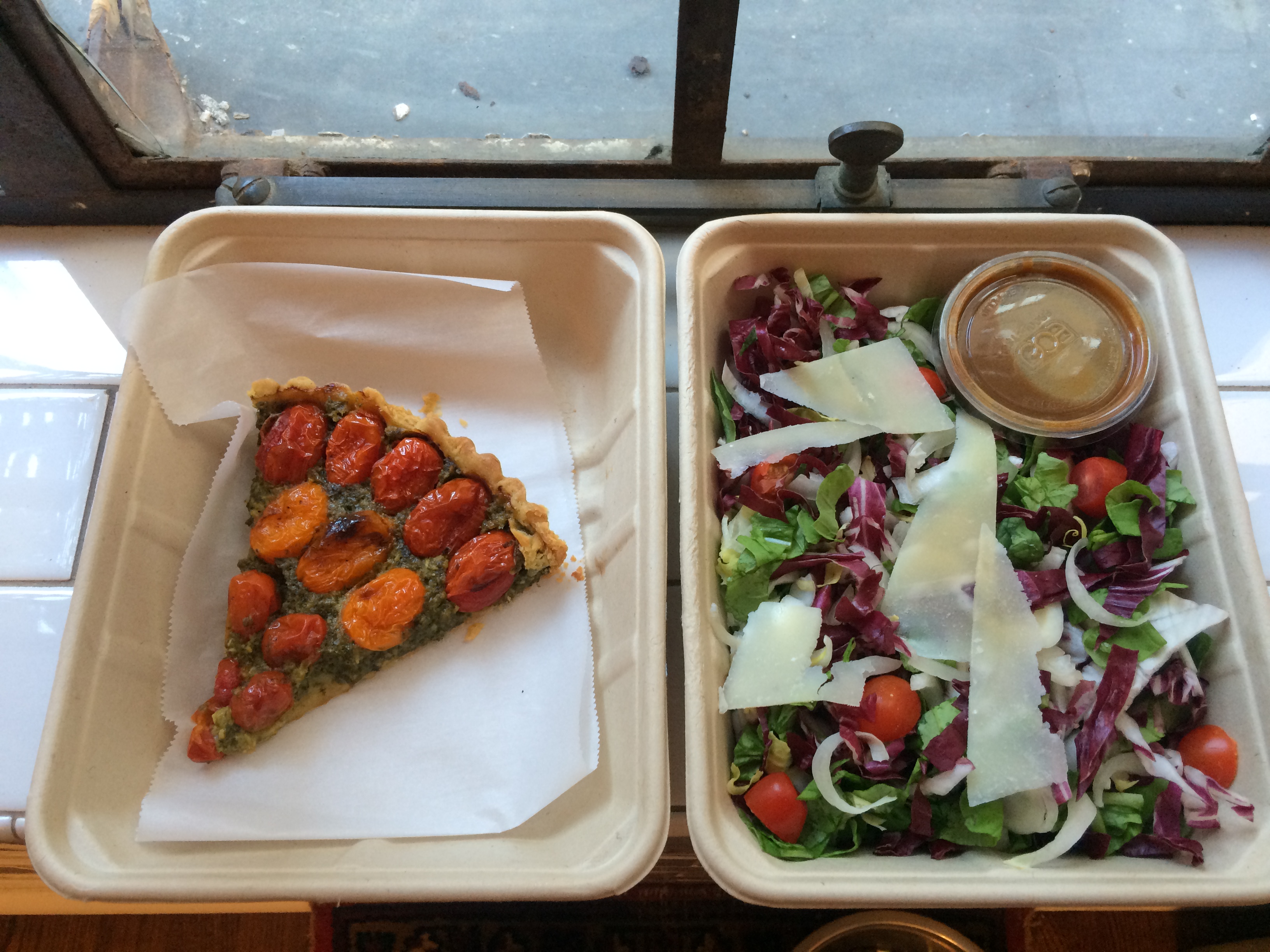 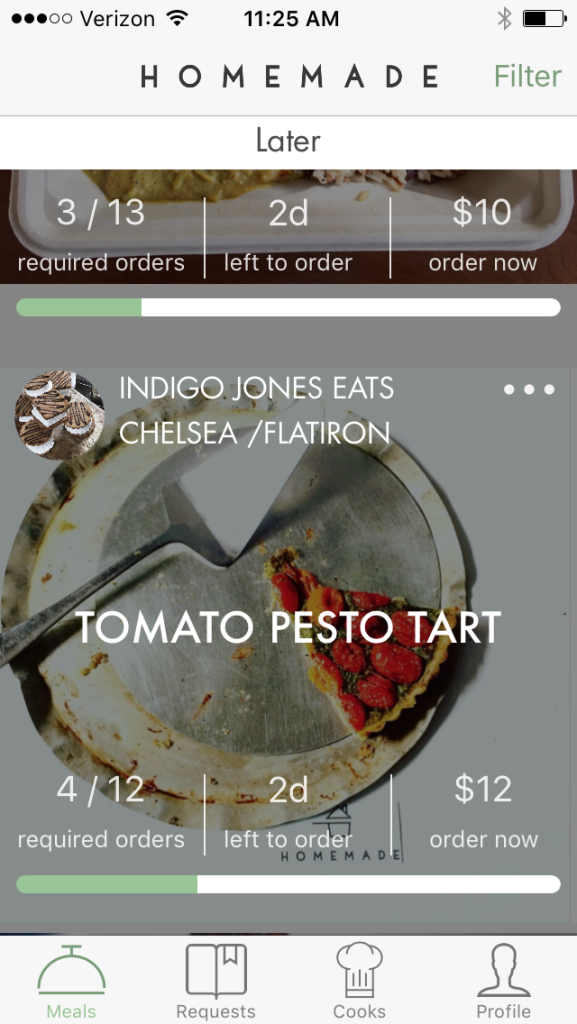 In the mood for a home-cooked meal, but don’t have the time or skills to make it yourself? There’s an app for that. Meet Homemade, the latest food delivery service in New York to disrupt the business of take out.

Developed by Nick Devane and Mike Dee, Homemade is a marketplace for cooks to produce and sell food directly from their homes. Devane came up with the idea three years ago while wondering how he could share his grandmother’s chocolate-frosted yellow cake with more people. With Homemade, he’s tapping into the city’s network of entrepreneurial chefs who dream of feeding their handcrafted specialities to fellow New Yorkers—all while making a profit. “There’s no reason as a hobbyist cook, you shouldn’t be able to share your zucchini lasagna,” Devane said.

Devane and Dee are self-taught coders and designers who owned Cafe Zulu, a pop-up on the Lower East Side that served coffee, pastries and craft beer during its three-month tenure in 2013, before committing themselves full-time to the company, which launched in November. As much as it’s a convenience for the Seamless customer who wants to put a face to his pad Thai delivery, Homemade is more of a platform for food entrepreneurs to build their brand and customer base. Anyone can apply to be a cook (more than 100 already have), and Homemade found most of its current chefs through Instagram. There’s a social element to the whole experience, whether it’s the person preparing your lunch texting you delivery details or an in-app link to her Instagram profile.

Besides a demonstrated interested in food, many of the cooks have a background in the restaurant industry, though Devane was careful not to lump them all under the category of “chef.” Joe Cheng Reed works full-time as a line cook and cooks for Homemade out of his Bed-Stuy apartment on his days off. “It gives me a lot of creative freedom,” he said. “When I’m in a restaurant, I cook other chefs’ food, and this gives me a chance to serve my own.” His culinary training is French but he likes to incorporate Taiwanese elements into his dishes, like the five-spice roasted pork with a scallion pancake dish he put on the app last month.

Lany Phlong is another food-industry professional who treats Homemade as a creative outlet. She’s a private chef based in Park Slope, and Homemade allows her to cook for a wider audience at a lower price point (most dishes on the app range between $10 and $20). Her speciality is Southeast Asian and Cambodian food. “I like to play off the philosophy of Cambodian food stalls that specialize in one thing,” she explained of her plan to stick to a few specialities, one of which is a Phnom Penh chicken noodle soup.

It’s not just entrees on Homemade, either–the platform makes a lot of sense for bakers, since breads, cookies and pies are relatively easy to transport and prepare in larger batches. It’s possible to get a sourdough loaf, a dozen vegan cookies, or a cinnamon bundt cake delivered most days of the week. There are also cooks who make items that seemed destined for larger production runs–like gluten-free protein bars or pints of ice cream. 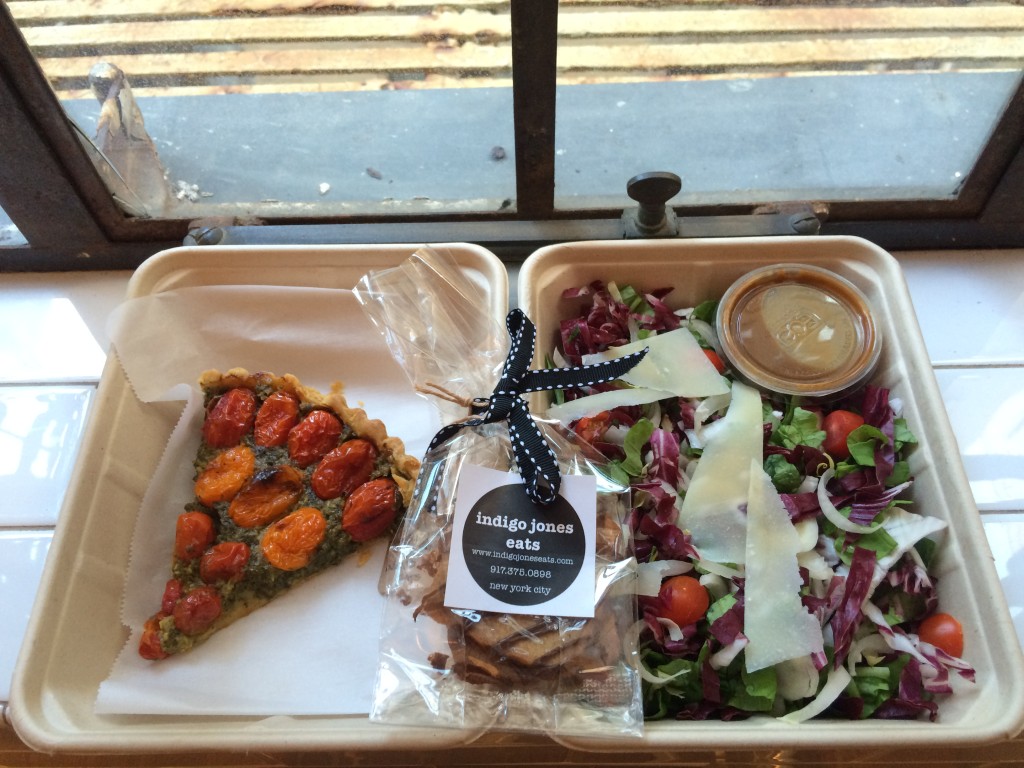 I ordered a tomato pesto tart on Homemade, which came with a salad and cookie. Photo: Elaheh Nozari

I tested out Homemade for lunch a few weeks ago. Time and location are the first factors that determine what you can order. The app is available all over the city, but it has the highest concentration of cooks around Brooklyn and in Far Rockaway (Devane attributes it to the sense of community outside of Manhattan). After I entered my location, a scroll-through menu listed dishes nearby. Each dish includes a photo, description and list of ingredients, plus a bio, photo and starred reviews of the chef. I chose a tomato tart for $12 by Indigo Jones Eats, who would be serving near my office that week. Ordering on the app is similar to making a restaurant reservation because most options appear more than a day in advance and you have to set a time for pick-up or delivery. There’s also a crowdsourced feature that shows you how many orders are required for the cook to actually make it. If Indigo Jones didn’t receive 12 requests, my order could’ve been canceled. I paid for my lunch anyway and a couple of hours later, I received a text that she had approved my request. Two days later, I received a day-of reminder text, and then the cook texted me with specifics about where and when she would deliver my food.

My pesto tomato tart tasted great, as did the side salad and cookie. I would definitely order from Indigo Jones again, but my overall apprehension towards Homemade is the question of food safety. The cooks prepare food in their own home kitchens, which aren’t commercially certified. Ordering from app requires you to put your trust in Homemade, not the Department of Health, to vet the cook’s workspace and skills.

According to Devane, Homemade, as a service that connects diners and cooks, is fully legal; he compared the system to AirBnb or Etsy. Interestingly, he also pointed to the app’s power to disrupt what he sees as an outdated regulatory system. “We also feel the system of regulation for restaurants is quite antiquated, both in the velocity it can address issues and the accountability that it provides (DOH comes infrequently, restaurants know before they come, you have up to two months to display a Grade Pending and appeal the DOH to try again for a clean bill of health),” he said. “Most importantly though, we feel innovation can lead and inform regulation, and we know it’s an important opportunity for cooks and culinary entrepreneurs that otherwise have no access or way to build a personal brand.”

If Lyft is your friend with a car (and yes, this is actually how Lyft works in places that are not New York City), then Homemade is your friend who likes to cook. Part of its mission is to add a sense of community to food delivery, and just as Lyft initially encouraged customers to talk to the drivers, Homemade encourages customers to get to know the person making their dinner.

Leave a Reply to lily s.