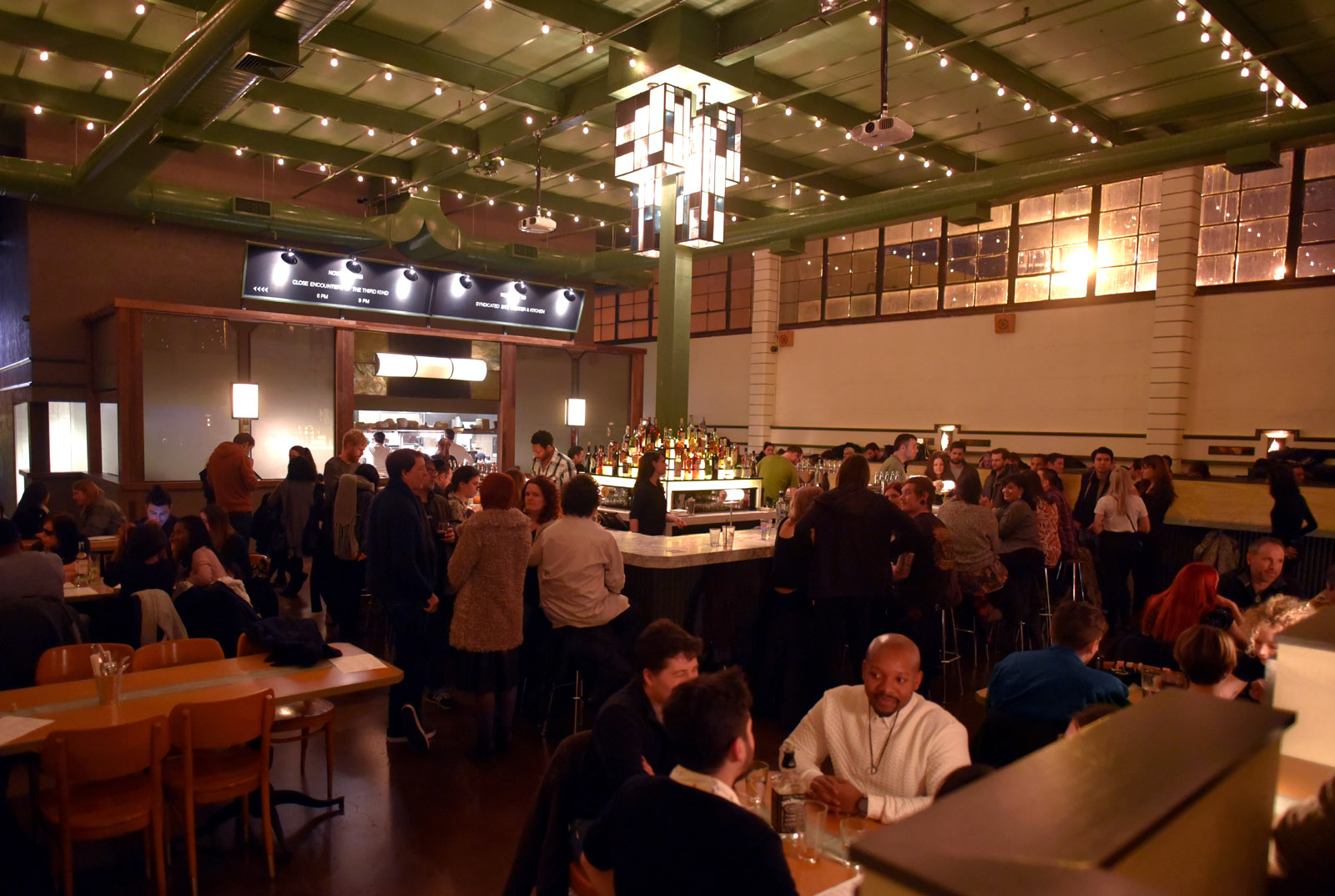 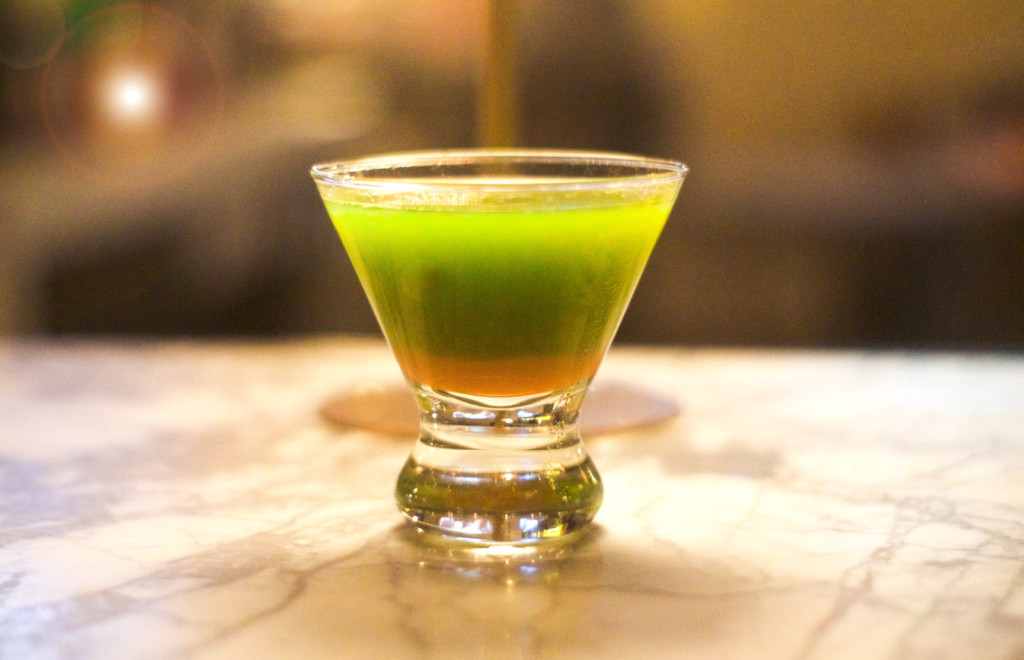 How about a refreshing Lawnmower Man cocktail to go with a double feature? Photo: Kenneth Vanhooser

Now that Bushwick has Syndicated, its very own restaurant-slash-movie-theater, there’s no reason to ever leave Bogart Street.

Right across from Roberta’s Pizza and steps from the Morgan stop on the L train, Syndicated has taken its cue from Williamsburg’s beloved Nitehawk theater (which was inspired, no doubt, by the Alamo Drafthouse theater, which is due to arrive in Brooklyn later this spring), and gone a bit flashier in attempts to keep you there for dinner AND a movie AND cocktails. First conceived of by former location scout Tim Chung, Syndicated resides in a massive converted warehouse space that boasts a dining room and bar area with 20-foot ceilings, recently packed wall-to-wall on Oscar night for a viewing party that was Bushwick’s answer to the Vanity Fair afterparty (ok, maybe not *quite*).

Chef Bret Marcis of Campanile and Rose Water has created a menu of upscale American comfort food, from greasy favorites like beer-battered mushrooms ($8) and loaded tater tots ($11) to proper meals like braised short ribs with horseradish creme ($26). Cinema-inspired cocktails like the Red Rum, with aperol and Peychaud’s bitters and The Lawnmower Man, vodka, green juice, carrot juice and chili syrup, are $13 apiece. 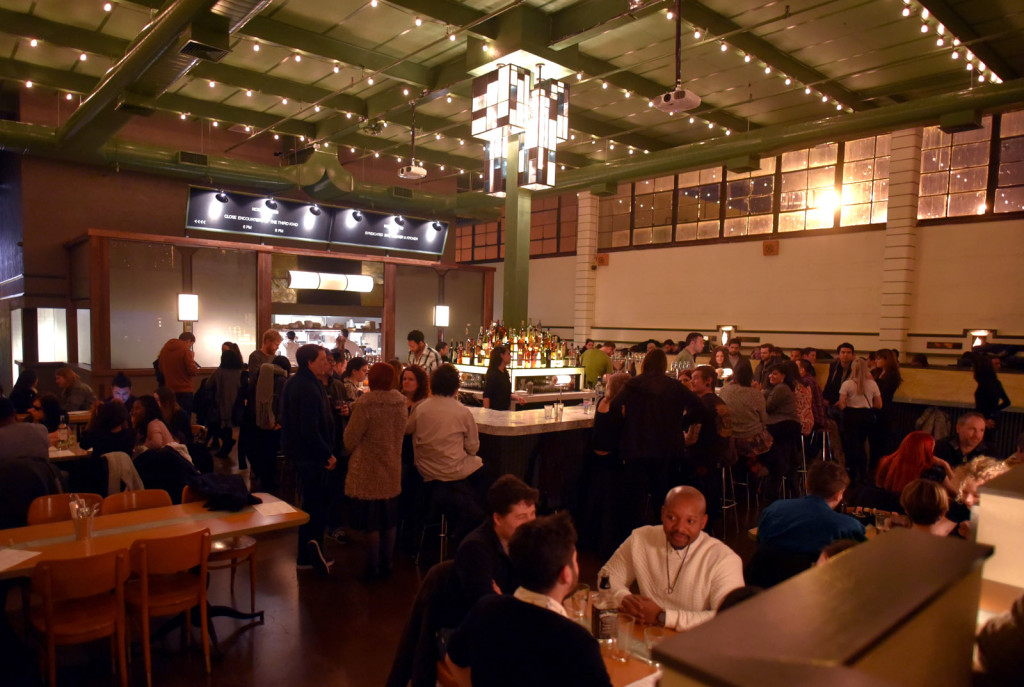 There are screens in the dining room so you can watch Broad City while you snack. Photo: Michael Tulipan

There’s plenty to see at Syndicated, which has two giant screens in the dining area (where select television events like the Oscars and Broad City are broadcast) along with an adjacent 50-seat theater that screens contemporary classics and new-ish movies for a staggering $3 a ticket, or $5 for well-curated double featues, like Spike Lee Double Joints this coming weekend, and Sofia Coppola’s two best movies, Lost in Translation and The Virgin Suicides, the weekend of March 26. In preparation for Oscars week, Syndicated screened the Best Picture nominees for which the two-month theatrical window had expired. And in January, shortly after it opened, the theater hosted a mini-memorial for David Bowie with a screening of The Man Who Fell to Earth. 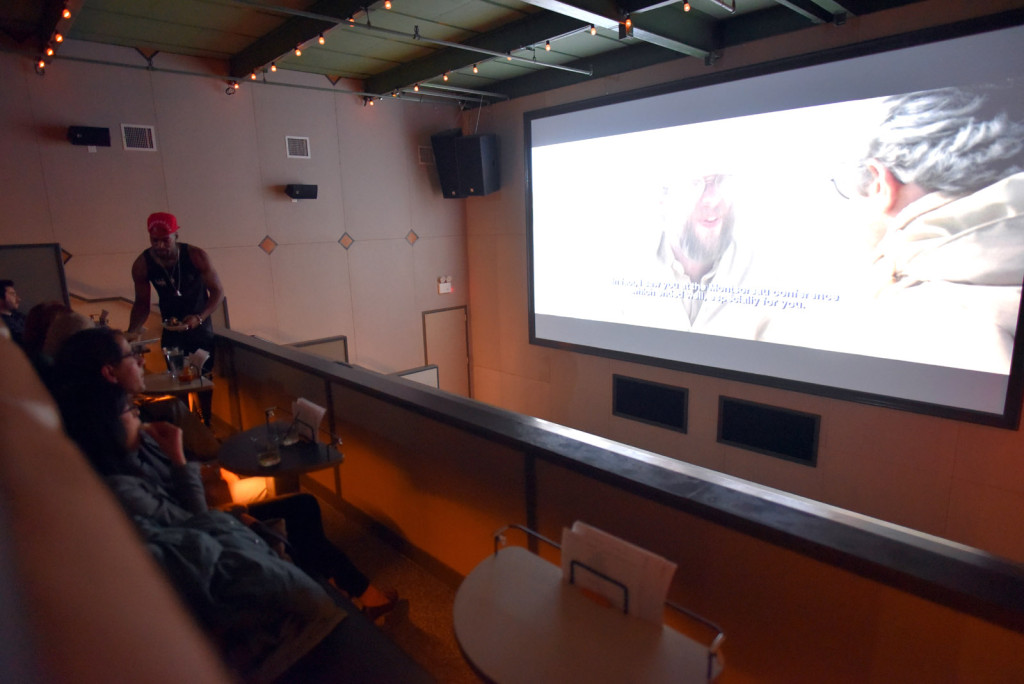 Inside the theater, you can order a variety of snacks (like those mushrooms and tots) as well as seasoned popcorn with unlimited refills, for $4. Like Nitehawk, Syndicated offers cocktails based on a particular movie or theme, like the Riff Raff, a multicolored concotion of Lunazul, Campari, pineapple, and house made Curacao to mark spring break week (when Spring Breakers was playing.)

That said, there are downsides to trying to do too much too soon and be all things to all people. We recently sampled their new weekend brunch program, which wasn’t terribly impressive. Dishes like French toast “dippers” and a Spanish tortilla, which could be more accurately described as a frittata, were fairly uninspiring in conception and execution, though the service was tops. The menu was just a little lopsided and weirdly meat-heavy. We suspect that Syndicated will fine-tune the brunch menu in the weeks to come, and hope they add one of their dinner salads (marinated kale gets our vote) and some avocado toast–that would go a long way. The Cerro de Punta ($10) is a welcome, caffeine-charged alternative to a standard bloody mary or mimosa (also on offer), with coffee, Caliche rum, amaro, and coconut, and can be served hot or cold.

We might be skipping brunch for a few weeks, but can’t think of a better way to do dinner and a movie than parking at Syndicated for the evening.