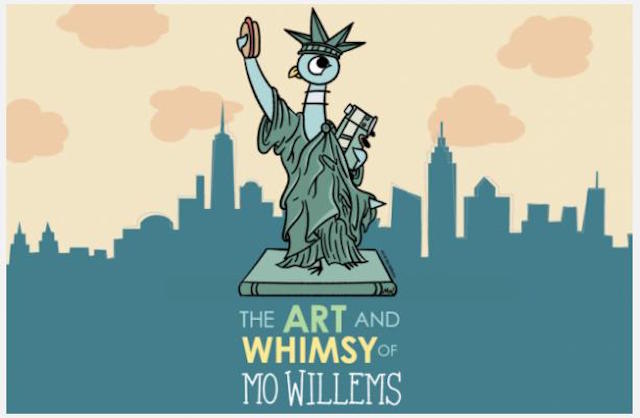 This show proves the classic appeal of Mo Willems, as well as the special place he has in the hearts of little New Yorkers. Photo: New-York Historical Society

Most children are intimately familiar with the words and artwork of Mo Willems. Learning boundaries as an infant is fun with Don’t Let the Pigeon Drive The Bus, sounding out words is enticing with the Cat the Cat series, and ideas of friendships are fully formed with the Elephant and Piggie books. New York City kids have a special connection to his characters, as the urban pigeon is obsessed with public transportation, Trixie and her family live in brownstone Brooklyn, and Knuffle Bunny rolls through a Park Slope laundromat. So it’s a ridiculous understatement to say that the New-York Historical Society’s latest exhibit, “The Art and Whimsy of Mo Willems” appeals uniquely to Brooklyn-based children.

On opening weekend, I brought my 6-year-old son to the exhibit, and after paying the admission, we were ushered into a line to meet Elephant and Piggie. “Is this really them?” my son asked as we watched dozens of families taking photos with the larger than life costumed characters. These were a far cry from Elmo at Times Square, with clean, soft, plush helmets that withstood hours of grubby, frantic little hands hugging and high five-ing them. After a fan photo, we headed up the stairs to the show. 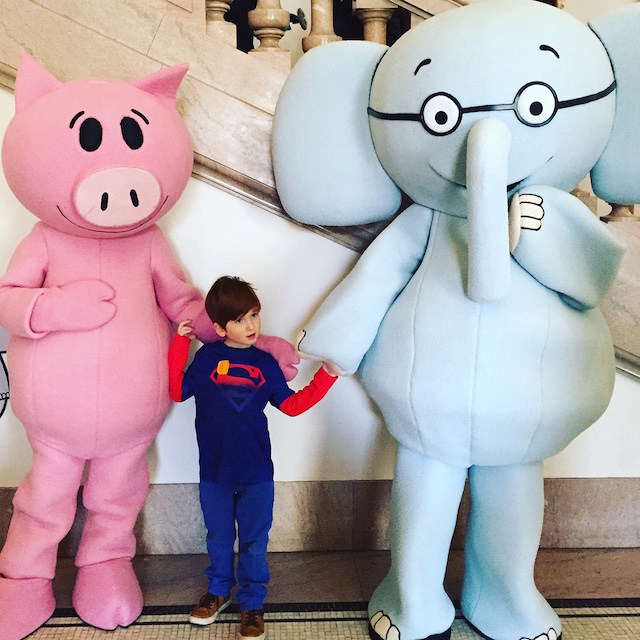 Not your average Times Square characters: these will delight not give a fright. Photo: Meredith Craig de Pietro

Inside the exhibit, there is more than enough material to keep kids entertained. If one was to pick up an audio guide at the start of the show, a child could press buttons on a personal phone device to hear Mo Willems tell tidbits and secrets about his success. One would find out that Knuffle Bunny was originally going to be a bear, before the author realized that a bunny’s ears would make for better body language. One would also find out why Gerald the Elephant has a name, and why Piggie does not. I found it fascinating that Mo Willems started his career in television, winning six Emmy Awards for his writing on Sesame Street before he dove into publishing. The exhibit displays original sketches, inspirational drawings, and dummy books from Willems’ arsenal of classics. 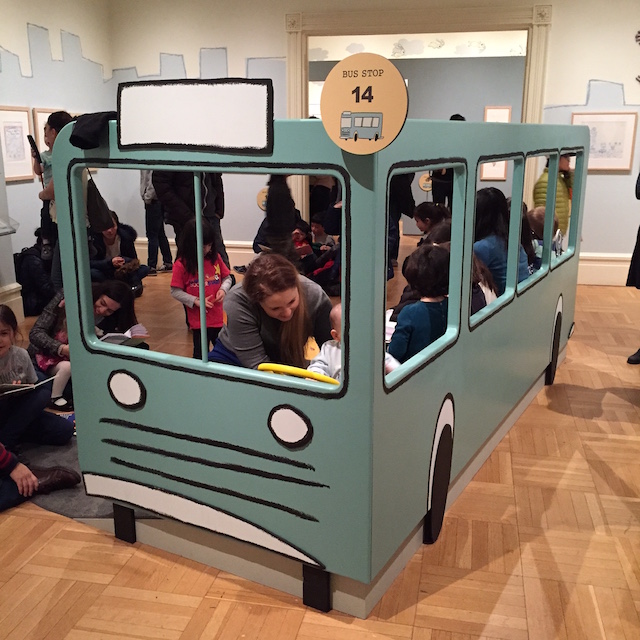 This is just one of the reading nooks that kids can curl up with a book. Photo: Meredith Craig de Pietro

My son, for one, would have loved this show, if I could have gotten him to take a look. But, proving the undeniable appeal of the author and his characters, the actual exhibit was no match for the accompanying book nooks that contained all of Mo Willems’ books, from his series to stand alone titles. On the day we visited, it was like a Stella McCartney sample sale, with children ripping books out of each other’s hands and crawling through legs to find castaway stories. At one point, I saw my son practically sitting on a dad’s lap to listen to him read “Edwina, The Dinosaur Who Didn’t Know She Was Extinct.” My son stockpiled a few “Cat the Cat” books and lay down in a corner reading intently while his parents perused the show. Piles of children and hardcovers filled every square inch of the book nooks, and I had to step gingerly over to my son to eventually bribe him to leave by telling him about the gift shop. 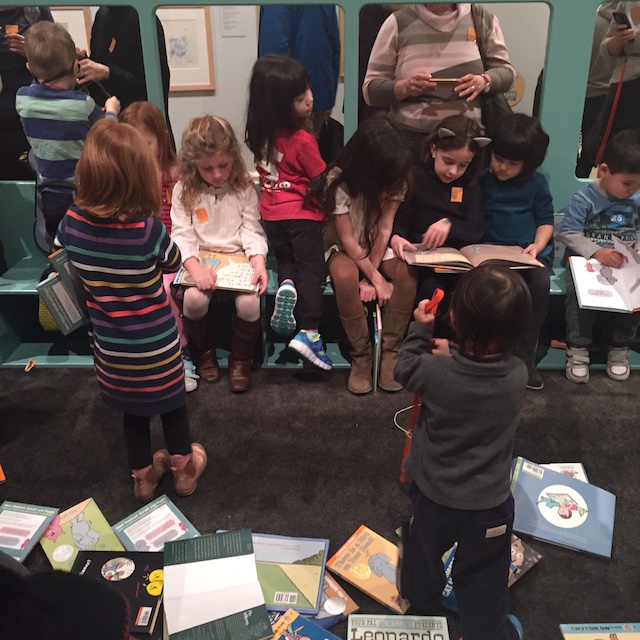 On the way out of the museum, with a new Mo Willems activity book in hand, my son sighed with pleasure. “Reading the books was the best part of this museum,” he said. Children don’t need to go to a museum to experience Mo Willems’ appeal, but doing so helps explain to their adults what the New-York Historical Society calls, “the science behind the silliness.”

All that literature built up an appetite for comfort food and sundaes, so we walked a couple of blocks to Sugar and Plumm, a child’s brunch fantasy come to life. Adults can munch on surprisingly delicious salads, while children can indulge in sundaes, sandwiches and house-made macarons.