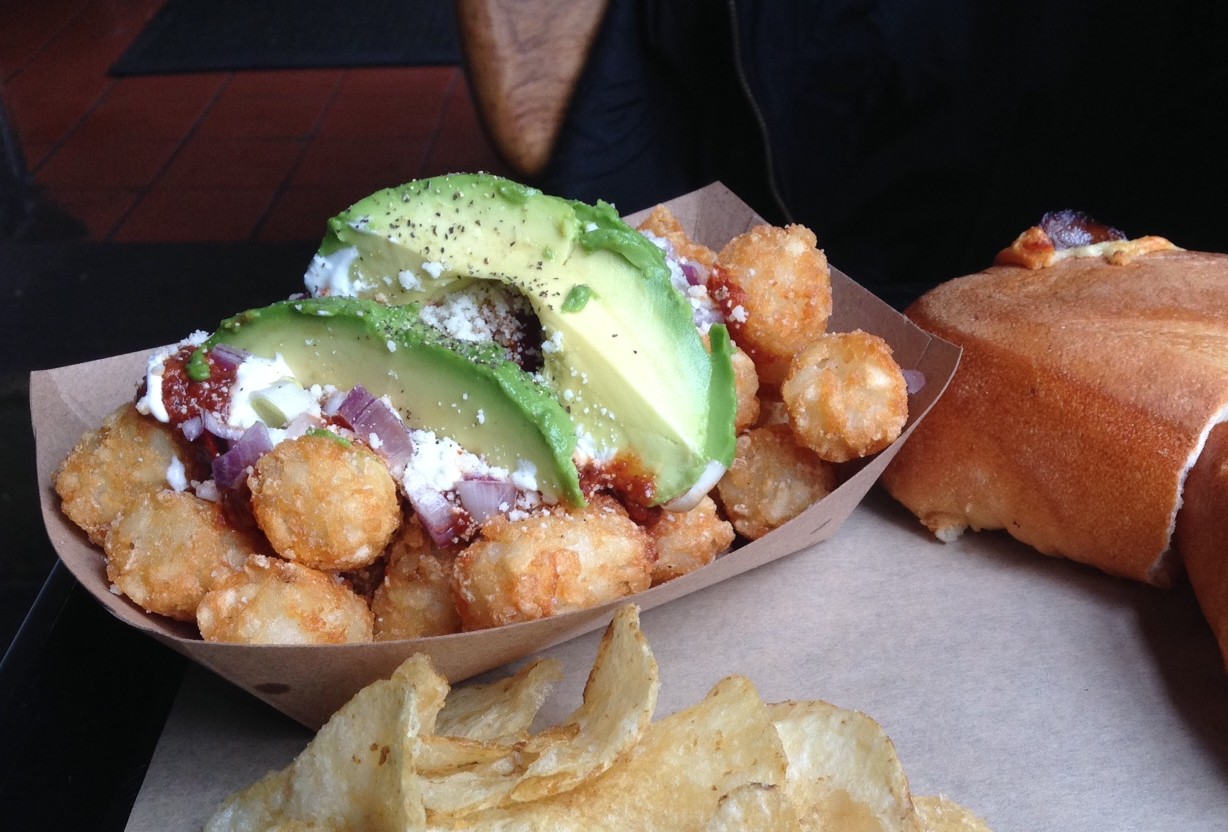 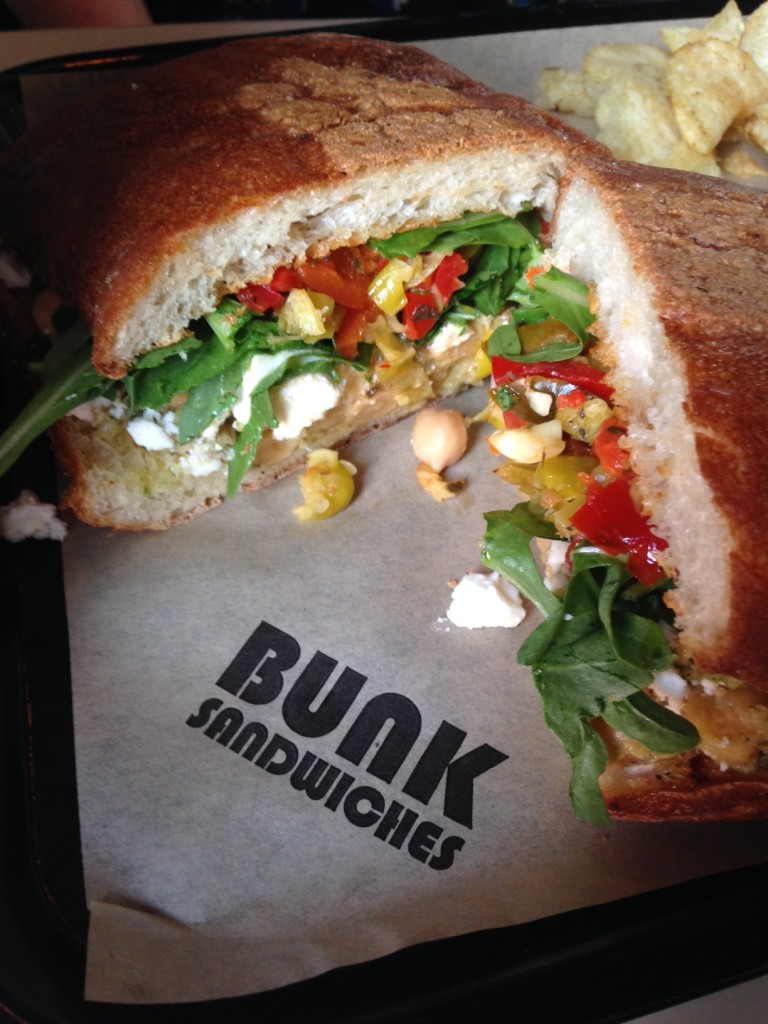 Vegetarian sandwiches don’t have to be boring. Or even particularly cheese-heavy. Photo: Annaliese Griffin

As regular readers of Brooklyn Based know, a few times a year we like to count off the new restaurants we’re most looking forward to in the coming months. The overheated food and real estate scenes in Brooklyn being what they are, some promising-sounding spots hit snags and delays, and some projects never come to fruition at all. Almost half of our list of 10 highly anticipated restaurants for last fall are still not open. Bunk Sandwiches in Williamsburg is one standout from that list that is very much open for business.

Despite plenty of white subway tile, white enamel industrial lamps and chalkboard menus–all the Brooklyn trappings, in other words–Bunk’s spot on the corner of South Second and Driggs still has a Pacific Northwest vibe that I can’t quite put my finger on. Maybe it’s the mural that overlooks the dining area, the colorful, and delicious refrescos in dispensers behind the bar, or the selection of craft beers. Or maybe it’s that the menu, rather than going for an over the top reinvention of the sandwich, reads like a top 10 list of the best sandwiches ever invented. 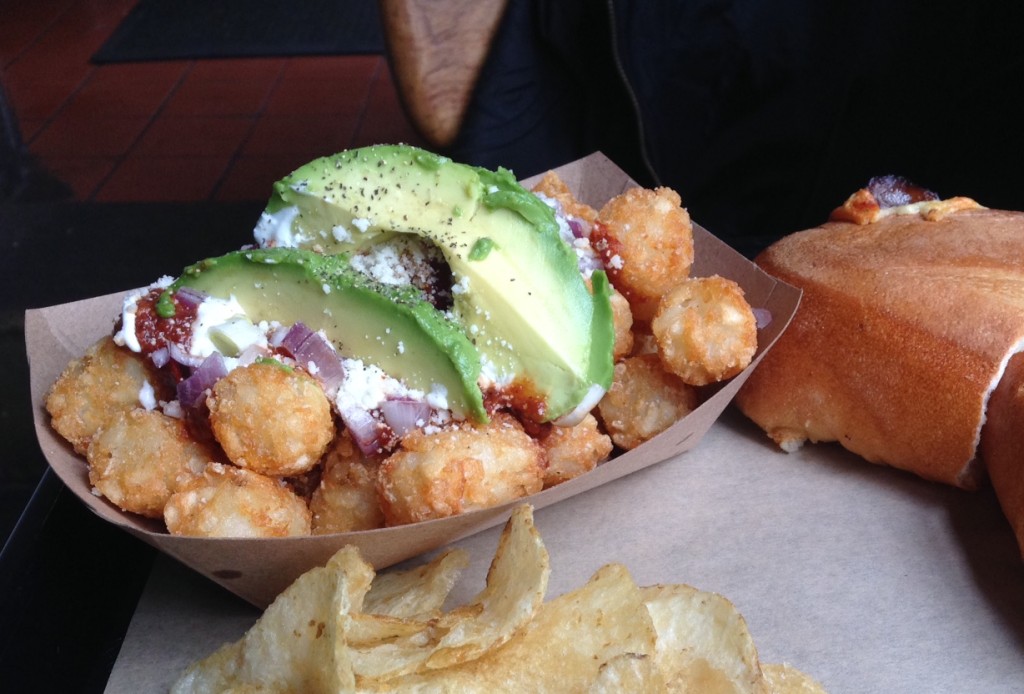 Tater tots with mole, avocado, cotija and crema are just as delicious as they sound. Photo: Annaliese Griffin

You can order an Italian cold cut sandwich, a meatball parm hero, a roasted poblano torta, a roast beef or a chicken salad sandwich here, among other equally enticing sandwich classics. On most days there are at least two different grilled cheese options and creamy tomato soup to dip the halves into. All sandwiches come with potato chips and you can also order fries or tater tots, which are good unadorned and even better with toppings like mole, carne asada or “beef and pork debris gravy.”

There’s nothing on this menu that would make you do a double take and tell your friends, “You HAVE to try this crazy sandwich.” At this moment in dining though, that’s a recommendation of Bunk. The sandwiches are also perfectly sized. On a recent afternoon I met a friend for lunch and arrived starving. I wolfed down a tuna melt, which made me remember how much better all tuna sandwiches are when prepared by someone else. The blend of mustard and mayonnaise, addition of pickles and perfect balance of creamy, celery-free tuna and melty cheddar was a nice step up from the greasy spoon version without feeling overly fancy. My dining companion wasn’t quite as voracious and finished half of her marinated garbanzo bean sandwich (Bunk is long on solid vegetarian options), taking the other half home. In short, an entire sandwich is super filling, but not in a gross way, and half is just enough if you’re not super hungry or want to really go big with your tot order. 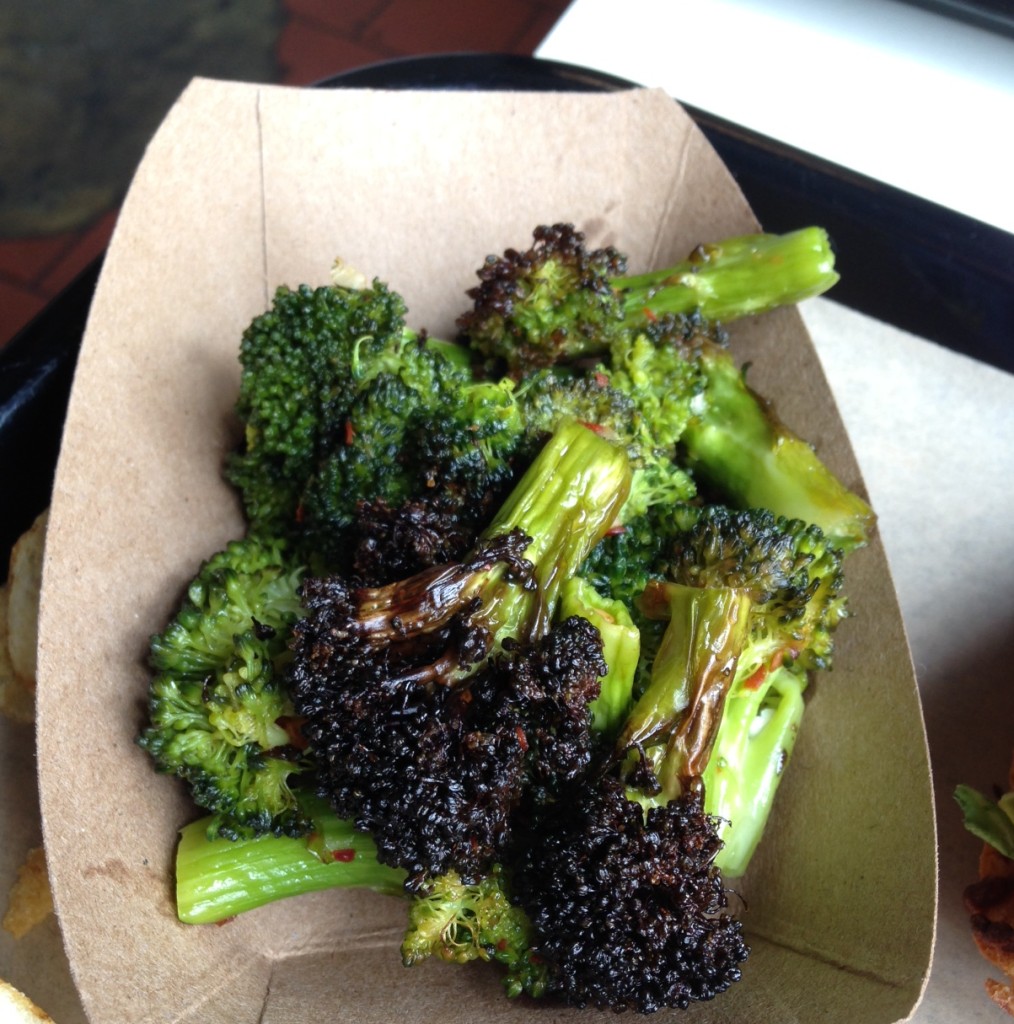 Burnt broccoli is much more delicious than it sounds. Photo: Annaliese Griffin

On another recent trip I tried the torta and the Cubano with another friend, which made me realize that the real key to Bunk’s success is their bread. The tuna melt and the Cubano were griddled in such a way that the outside was crisp, but there was still a nice soft chew to the bread, and at no point did I feel like the inside of my mouth was being abraded by the crust. The torta was served on the same bread, but untoasted and it was at once soft and yielding enough so that the beans and cheese and guacamole didn’t squirt out when I took a bite, but also sturdy enough not to disintegrate. Some serious thought went into that bread.

For carb haters and gluten avoiders, most sandwiches can be made into salads, and there’s even a green alternative to fries or tots. The burnt broccoli comes in a paper boat, which makes everything taste better, and it’s salty, oily and snacky in a way you don’t usually see in a vegetable. So maybe that’s the thing that Bunk is reinventing, snuck onto their menu of perfectly executed, delightfully normal sandwiches. Tell your friends.