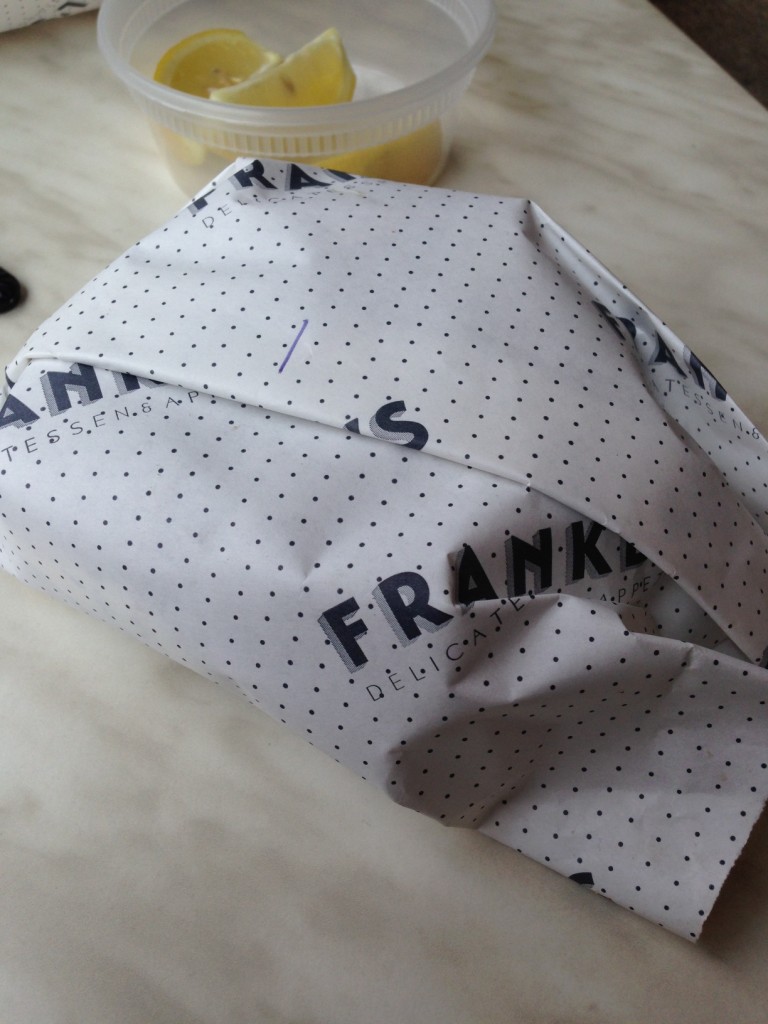 What’s inside is so much better than a rainbow bagel. Photo: Annaliese Griffin

If there’s one kind of food that New York City truly does better than anywhere else, it’s bagels and lox, or more broadly, Jewish deli staples including cured fish and fish salad, bagels of course, as well as pickles, chopped liver and maybe even some brisket.

A good bagel sandwich relies on multiple elements—the bagel must be plump but not bloated, the salmon salty but not excessively so, and the cream cheese and other accouterments shouldn’t be overpowering. As much as they’re a hallmark of the city’s culinary make-up, really good bagels and cured fish can only be found at a handful of places, most of which are clustered on the Upper West Side and Lower East Side, not in North Brooklyn. That was, until a few weeks ago, when Frankel’s opened in Greenpoint. 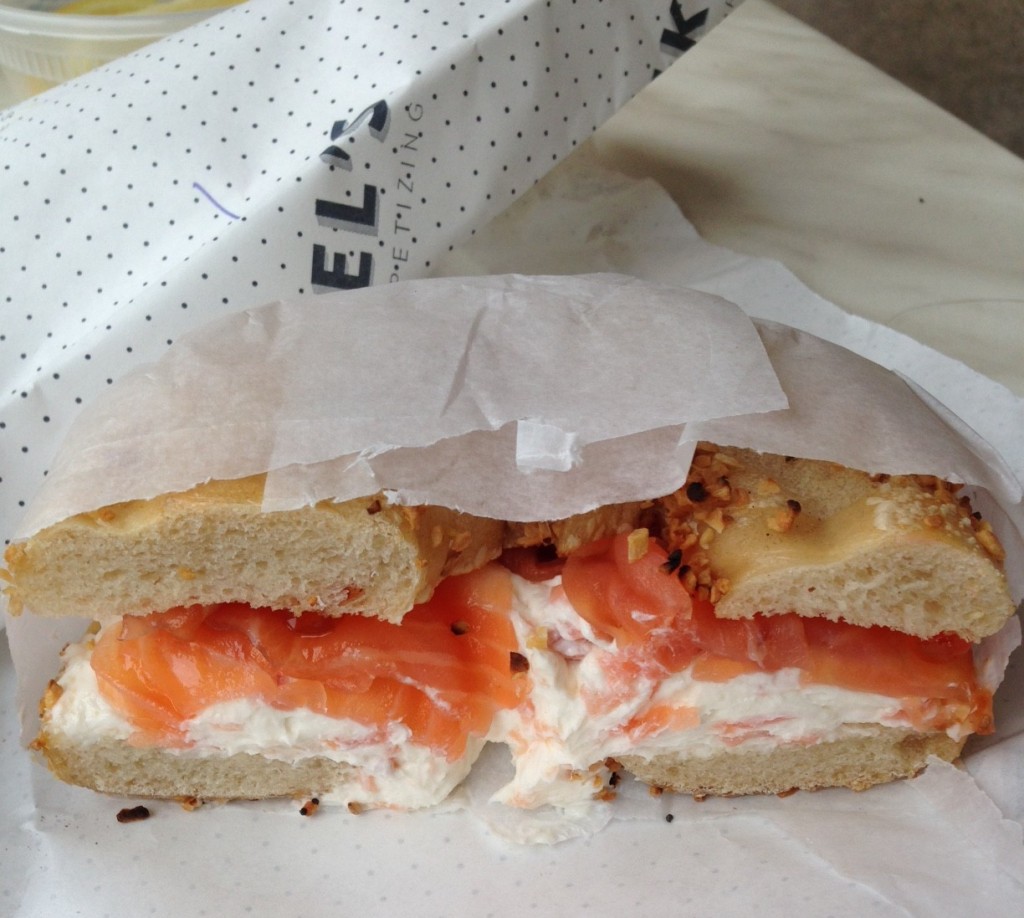 Nova, nova spread and salmon roe–this is the maximum amount of fish you can get on one bagel. Photo: Annaliese Griffin

As the story goes, brothers Zach and Alex Frankel grew up going to the Jewish delis and appetizing shops of the Upper West Side, and their new store, located on Manhattan Avenue by the corner of McCarren Park, is an homage to the bagel emporiums of their childhood. Frankel’s is very much a byproduct of the renaissance in Jewish cuisine that began in Brooklyn with Mile End Deli and Shelsky’s, and may have hit its peak in 2014 when Baz, Black Seed, and Russ & Daughters Café all opened, and then continued into 2015 with the opening of Sadelle’s and renovation of Kossar’s Bialys. The popularity (as measured by weekend lines) of all these stores proves that the demand for smoked fish and the like is alive and well across in New York City.

Frankel’s, a counter-serve restaurant and retail shop, is both a deli and an appetizing store. The menu is a conglomeration of all the foods that define Jewish comfort cuisine: bagels and bialys; nova lox, whitefish, and sturgeon; hot pastrami and chopped liver sandwiches on rye; matzo ball soup; hot brisket; and potato latkes. The retail shelves are stocked with rugelach, babka, matzoh and dried fruits. The bagels come from Baz and the smoked fish from Acme, among other sources, but the majority of the food is made in-house. The signature hot brisket, served as a sandwich or platter, is based on a recipe from the brothers’ grandmother. 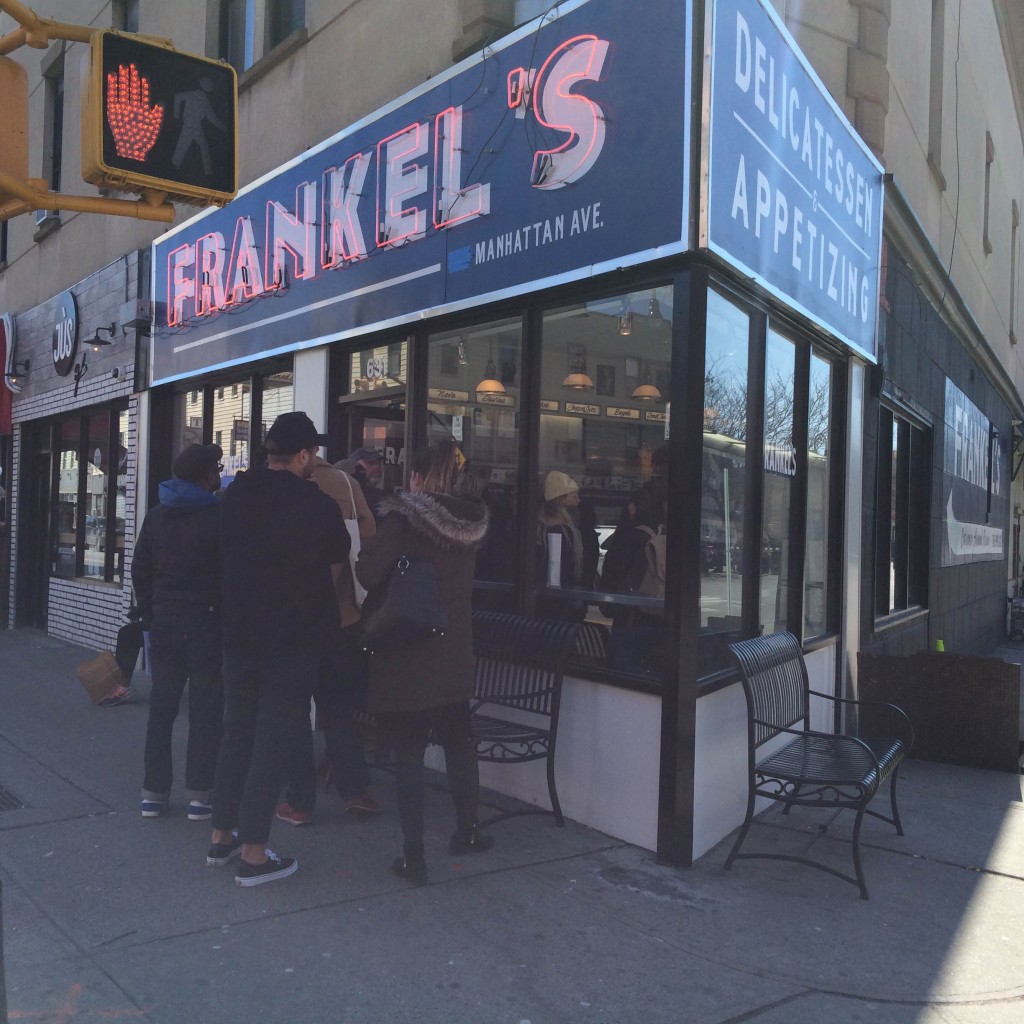 If you go on the weekend, or even some weekdays at lunch time, there will be a line. Photo: Elaheh Nozari

Basically, everything you might want to eat on a weekend morning is available at Frankel’s, so I shouldn’t have been surprised when I showed up on Sunday at 2pm and was greeted by a line down the block. Luckily one of the owners was outside handing out menus and apricots to nosh on. The bad news? The pastrami and corned beef, plus most of the bagels, were sold out. The brisket was almost out as well, but luckily I was there for the lox. Instead of a bagel, I ordered my pastrami salmon and scallion cream cheese sandwich on a brioche roll ($12). I was pleasantly surprised, and I’d happily forgo a bagel for a roll in the future. Frankel’s prices are comparable to similar upscale shops with bagel sandwiches clocking in between $10 and $15. It’s not cheap for a counter-serve deli, but it’s on par with the rest of New York–cured fish is not, and really should not be, cheap. 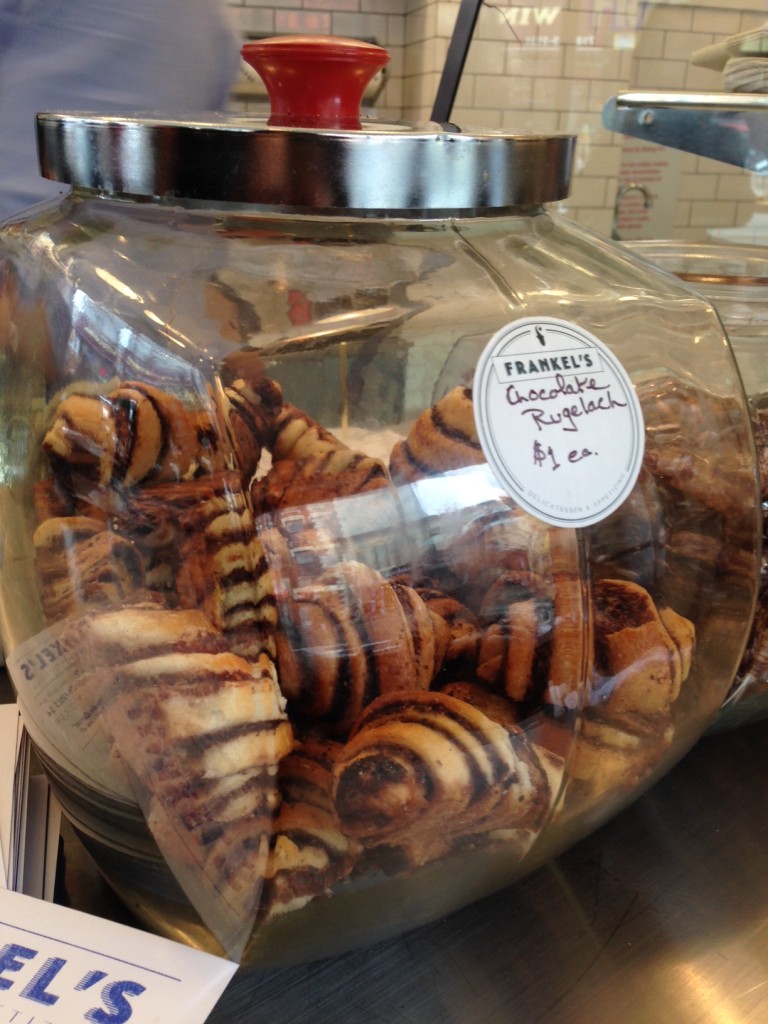 They do, however, have a recession special–two hot dogs and a soda for $7, and Frankel’s opens every day at 8am, serving bagels and breakfast sandwiches–and yes, they have bacon. The pastrami, egg and cheese ($8.95) is a nice shake-up from the usual, and the bacon and tomato combo with scallion cream cheese on an everything bagel ($7.95) is a real day starter. If you haven’t tried the bagels from Baz, they’re not as enormously dough-y as your standard-issue Hot and Crusty, but they are definitely more generously sized than the Montreal-style from Black Seed. While the weekend line holds steady for hours, during the week it’s more intermittent. During lunch and find a line out the door, or to walk right up to the counter, depending on the moment.

Everything about Frankel’s feels trendy–from the subway-tiled décor and black-and-white photographs meant to invoke an old-school deli, to the clientele and owners (one of the brothers is part of the synth duo Holy Ghost). I admit that if it were located in the heart of Williamsburg, I would’ve found it too hipster and image-driven, but its location in Greenpoint makes it feel like more of a neighborhood spot. Trendiness aside, it feels and tastes like a Jewish deli, so if you like bagels, brisket and all things appetizing, you’ll like Frankel’s.