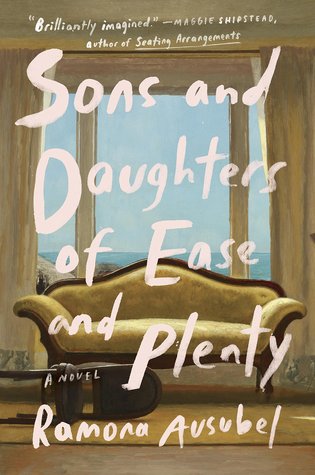 Fern and Edgar Keating, the young, wealthy couple at the center of Ramona Ausubel’s novel Sons and Daughters of Ease and Plenty, come from the kind of homes where, as Ausubel writes of their money, “there had been so much for so long, the kind of sums that seemed immune to depletion.”

Well, the money is gone, and a cold shower of a phone call from Fern’s family lawyer following the death of Fern’s parents sets the young couple and their three children into a tailspin that begins at their idyllic Martha’s Vineyard summer house over Labor Day weekend in 1976. Edgar must decide whether to go work for his father’s steel company to support his family and abandon his dreams of being a novelist (the novel was about a son who walks away from his father’s steel money) or whether either Fern or Edgar can find a way to support their family and give up the lifestyle they’ve become accustomed to. Maybe they’d both have to find other jobs.

If your reserves of sympathy and interest are suddenly as depleted as Fern’s family fortune, take heart. The Keatings may be selfish, but they are also fascinating in how they react to the news.

Edgar runs away on a sailboat with a woman he had a one night stand with at a party; Fern opts for a last-minute road trip with a very tall man she refers to as a giant, whom she meets while volunteering at a nursing home. Husband and wife each think the other has stayed with their three children, twin boys and a nine year old girl, who gamely leads her younger brothers for days, feeding, clothing, and supervising them, possibly with even more attention than their young and shaken parents could have mustered.

The book thankfully never makes excuses for the Keatings. Instead, Ausubel flips between Fern and Edgar’s 1970s predicament, their meeting and wedding in the 1960s, and the family histories that help explain how they got here in the first place.  Ausubel’s cutting descriptions of the subtle but crucial differences between their two families offer additional insight. Edgar’s mother and her fraught relationship to the family fortune is particularly finely drawn. She desperately decorates her home (“every decision in the house was a danger: it had to look understated and modest while still making other women jealous”), but beneath that old money haughtiness lurks a woman with artistic aspirations far out of line with the expectations of her station.

The Keatings may not be sympathetic, but the way they grapple with their riches to rags journey illustrates how money both insulates and destroys–a perfect beach read if you’re reclining in the Rockaways rather than the Hamptons this summer.