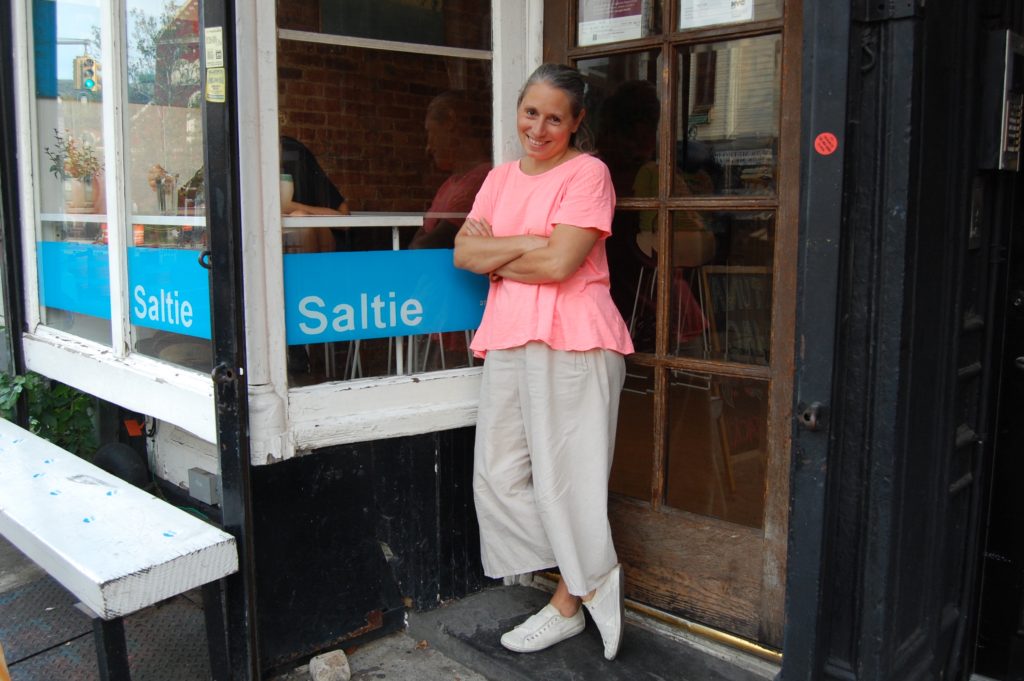 In a neighborhood like Williamsburg, which has arguably experienced more change than any other part of Brooklyn in the past 10 years, finding the familiar can feel like slipping into a snug sweater you thought would never fit again. On one corner, where there was once a modest building there is now an elaborate Whole Foods Market. Across the street, where lines used to form for bagels, people now wait for the latest iPhone, while tapping at their current iPhone.

But just four short blocks east on a busy stretch of Metropolitan Avenue sits a sandwich shop that looks and feels the same as it did when it opened seven years ago.

That place is Saltie, a compact “farm to table” eatery that makes sandwiches loaded with Mediterranean flavors with names like the Scuttlebutt and the Spanish Armada. It’s a neighborhood spot that, according to owner and chef Caroline Fidanza, has thrived in Williamsburg by not changing even as many things around it did.

“We have just tried to continue to be who we are and distinguish ourselves in that way,” she said, in a reflective conversation over unsweetened iced tea on a recent unseasonably warm September day. Fidanza is committed to her craft and business at a time where the restaurant industry, and customer tastes, are changing as much as Brooklyn itself.

“When we opened, it was all about sustainability. People would come in and ask ‘where did you get your eggs from?’ Because they cared, they wanted to know. Now, nobody ever, ever, ever asks anymore.”

We spoke at Saltie, which can seat maybe 10 people comfortably and has famously uncomfortable stools for just four diners. Over the course of 90 minutes, as we chatted about her desire for both change and stability, and about her views on current restaurant trends, more than half the customers chatted with Fidanza as if they’d known her for years, and indeed many of them likely had.

The clientele at Saltie has largely remained the same over the years, said Fidanza, a more than 20-year-resident of Williamsburg who spent a decade cooking and butchering whole animals at Diner and Marlow & Sons before opening Saltie. In addition to those regulars, the restaurants tends to attract a certain type of customer. 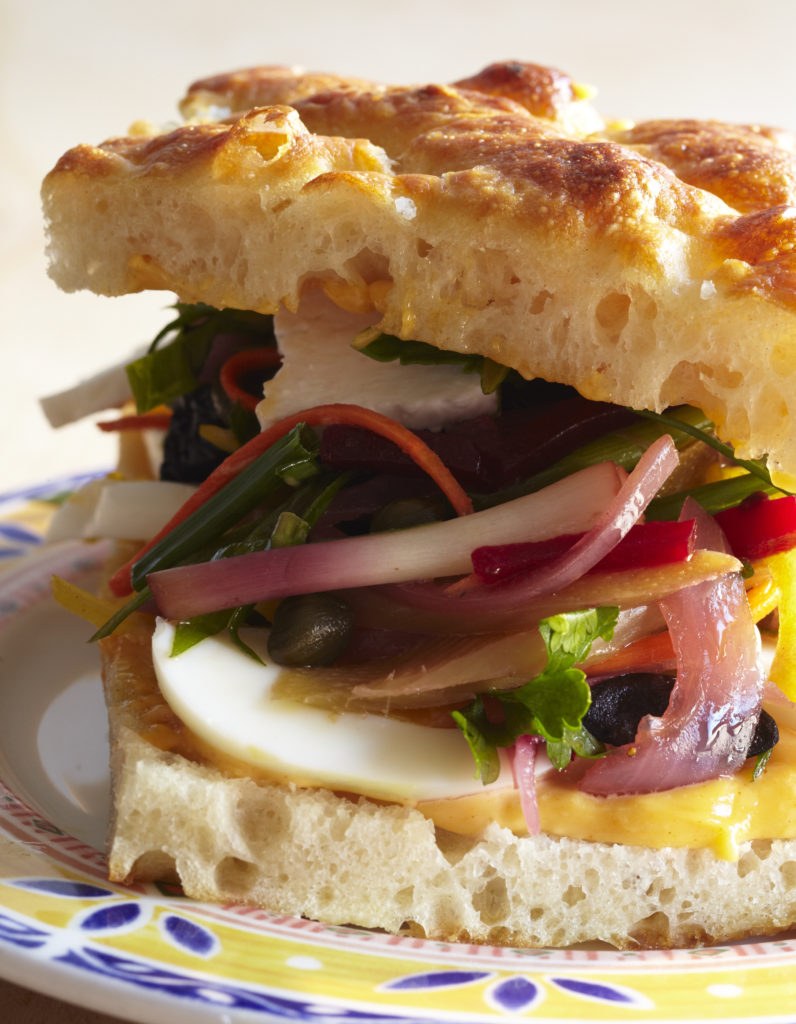 The Scuttlebutt is Saltie’s most popular sandwich and truly, a thing of chaotic beauty. Photo: Saltie

“Creative types, restaurant industry types. Not like tech creative types but real hands-on creative types,” she said, describing the customers who gravitate to Saltie. “They’re not necessarily the same people that came in seven years ago. They are people who are less representative of how the neighborhood is changing … But they are fortunately still around and still come in,” she said.

Andrew Tarlow, the Brooklyn restaurateur who opened Diner, Marlow & Sons and Achilles’ Heel, to name just a few beloved establishments in the borough, said Fidanza, known as “Cheffie” to his family and the extended Marlow/Diner family, had hit on a winning formula at Saltie.

“We know that Caroline is constantly questioning what she does. Any good chef has to. And she keeps coming back to the same answer. It must be good,” he said. “Not changing shows conviction.”

But while Fidanza is happy to be heading up a business that people love and rely on, a “safe haven” as she calls it, she is now the sole owner of a business that began with two other partners. To steer the ship alone, she says, is unsustainable.

“I don’t love it. I like collaboration and I really like partnerships. I think I work better with other people,” she said. One partner, Elizabeth Schula, left after the third year in business to move upstate. Rebecca Collerton, the chef behind the popular Mr. Curry pop-up dinner venture at Saltie, departed in April. The two chefs had divergent goals and desires, Fidanza said.

Fidanza has been on the frontlines of both the Brooklyn and sustainable food movements for more than 20 years, and her perspective on current restaurant trends carries weight.

“I’m always amazed that people will wait in a line. When I see a line I just go to the place next door that has no line.”

“When we opened, it was all about sustainability,” she said. “People would come in and ask ‘where did you get your eggs from?’ Because they cared, they wanted to know. Now, nobody ever, ever, ever asks anymore.”

“I’m always amazed that people will wait in a line. When I see a line I just go to the place next door that has no line,” she said, laughing.

Perhaps because of time, or changing tastes or just her role as manager more than chef, Fidanza is pondering next steps.

“I would love it if this thing could run on its own, and be a little money manufacturer, but it can’t, it needs to be tended to,” she said. “People think things run on their own and they don’t. They run with a lot of effort.”

Ideas she has tossed around: opening multiple locations of Saltie across the city or opening a “Big Saltie” as she calls it, which would be open all day and into the night.

“Breakfast, lunch and dinner. Beer and wine and cocktails. And just have that be like, my home,” she said. “I would be very content to just like, have one thing that would have all of the things I need to be successful, like an office and a beer and wine license and a public bathroom and comfortable seats,” she said, ticking off the things that Saltie is lacking. “And then I would be happy. To just do that.”

“What she’s doing is great, she believes in it, and if you believe in what you do, [people] can feel it,” said Tarlow.

Above the counter at Saltie, hanging beside a list of daily specials, is a tote bag for sale. On it is the name of the most popular sandwich, The Scuttlebutt, printed in cursive, and below it, a constellation in the sky. Fidanza tells me the constellation represents chaos.

It’s the last word I’d choose to describe her, or Saltie, I say. Saltie is a constant; a port in a storm.

But then Fidanza clarifies for me: it’s the Scuttlebutt that’s chaotic. Of course! A sandwich that’s a tangle of foods–hard-boiled egg, feta, black olives, capers, seasonal pickles, pimenton aioli–that somehow comes together cohesively. Examining the sandwich before taking a bite is not unlike watching someone construct a cat’s cradle out of string.

Where there is chaos, there is also calm. And that’s Saltie.