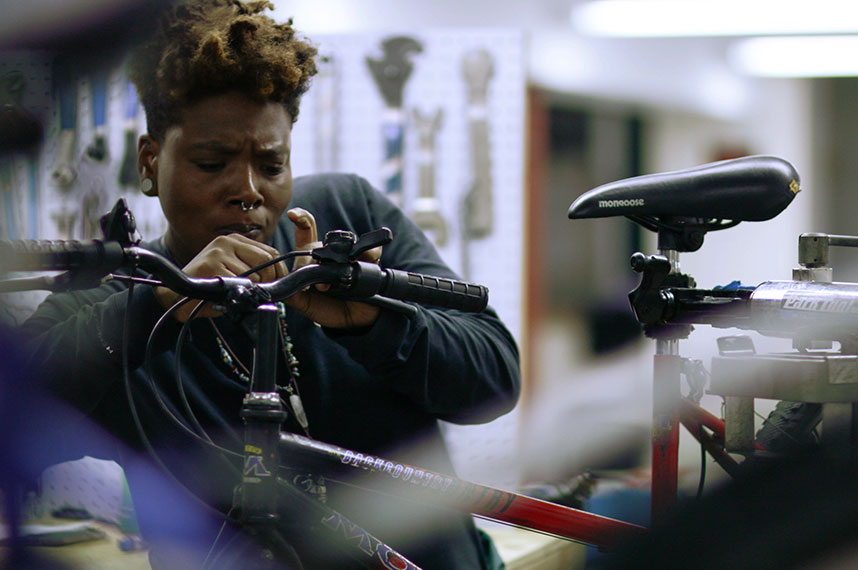 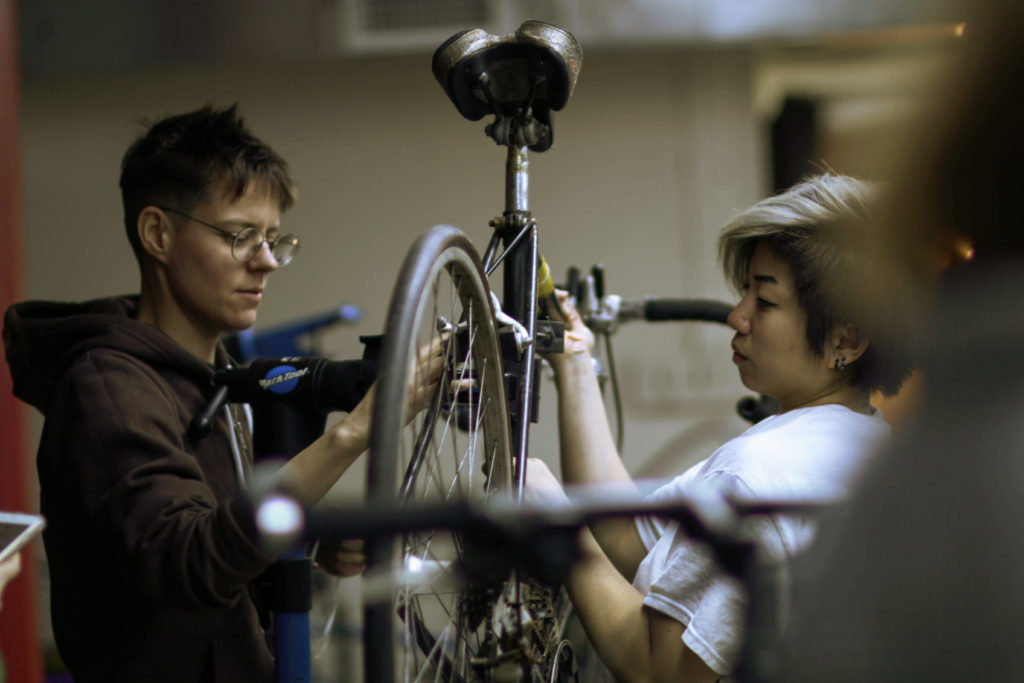 The early birds entered through the red door of Williamsburg’s Lutheran Church of St. John the Evangelist at 5:45pm. They descended a flight of stairs to a basement with tile floors, chairs stacked against the wall, the lingering smell of incense.

And a bike workshop.

“Take a sticker, and write your name and pronouns,” said Denise Shu Mei to newcomers.

One woman carefully printed “Erika” and “she/her” before sticking it to her shirt front.

This was the third and final class of Mechanical Gardens‘ inaugural W/T/F Bicycle Repair and Maintenance Intensive. The hands-on classes were open to women, trans persons, and non-binary individuals.

The waitlist for the series, which stands for Women/Trans/Femme, was long and the feedback has been overwhelmingly positive. Instructor Sera Stavroula said it will not be the last. 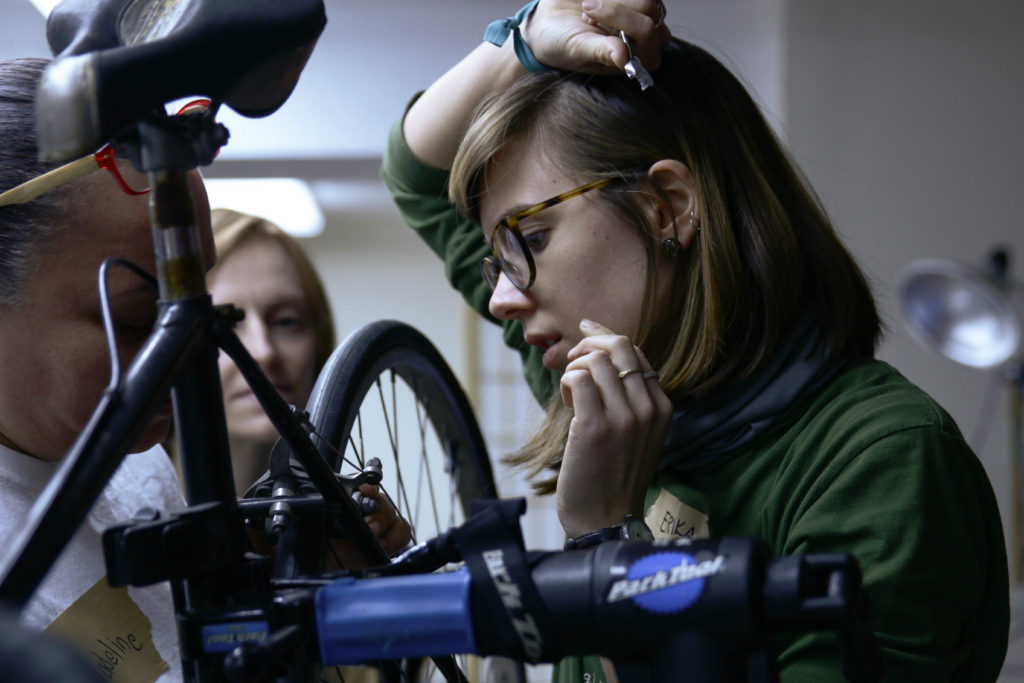 Each night Stavroula focused on a different system, how it functioned, potential issues that might arise, warning signs, ways to fix the problem, and how much the repair should cost at a bike shop. She said students got their hands dirty and sized chains, recabled shifters, and changed tires and brake pads. They learn to diagnose and fix problems, and if they need to take their bike into the shop, this class should demystify the process.

Stavroula, who has worked with bikes for six years, was the first female mechanic at a pro-shop in Richmond, VA. Today she works as the Bike to School coordinator and a mechanic at Recycle-a-Bicycle in Dumbo.

“You go into a bike shop and it’s a lot of guys,” said Stavroula. “It’s hard to access that space if you don’t have experience.” 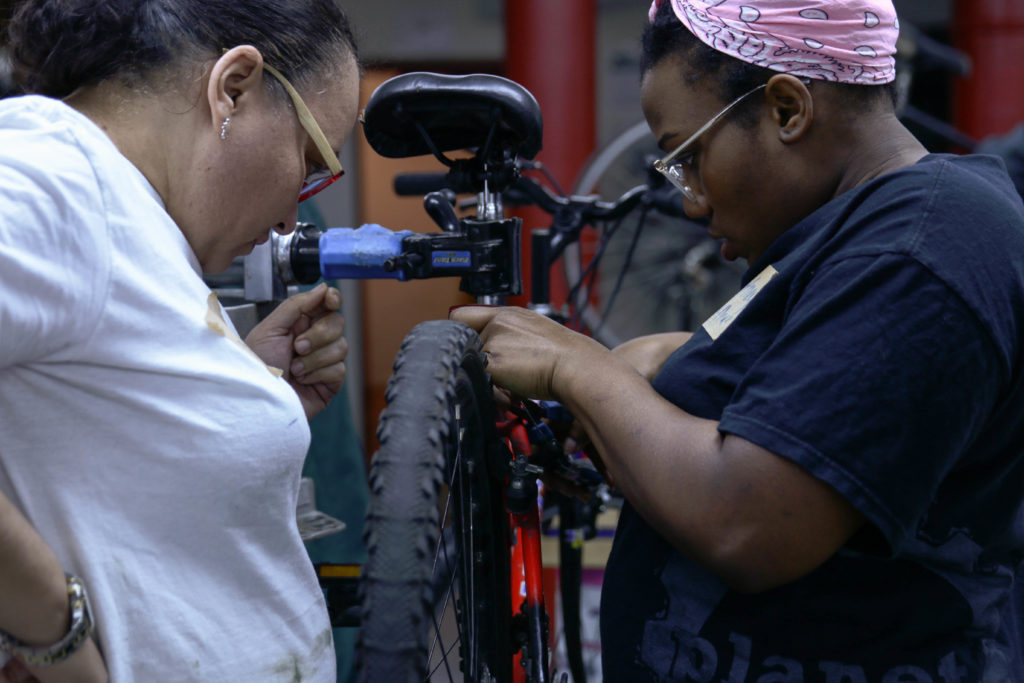 Madeline Abreu and Courtney Williams team up on a set of brakes. Photo: Kate Ryan

Over the past five years, New York City has added 300 miles of bike lanes and has seen the number of regular cyclists (defined as those who ride a few times a week) increase by 250,000, but the resources for female cyclists and the number of female mechanics is still unimpressive.

More than one participant said they felt talked down to by male mechanics and even overcharged at bike shops. They said there is an expectation that a young woman with a bike will not know what she is talking about.

Stavroula said the industry is trying to change, offering scholarships to women to study bike mechanics, but it’s slow going. “For the most part, people become mechanics by hanging out in a shop and getting someone to teach them,” she said.

Until more women and gender nonconforming individuals see people like them in a space, they are not likely to just hang out in a shop. That’s why co-ops like Mechanical Gardens, which are often more diverse, are so important. They act as gateways to the bike world. Students in this class said they would be more comfortable in a shop after these sessions.

“It’s more relaxing working with your hands around women,” said Madeline Abreau, a participant in the class.  “Men tend to be less forgiving.” 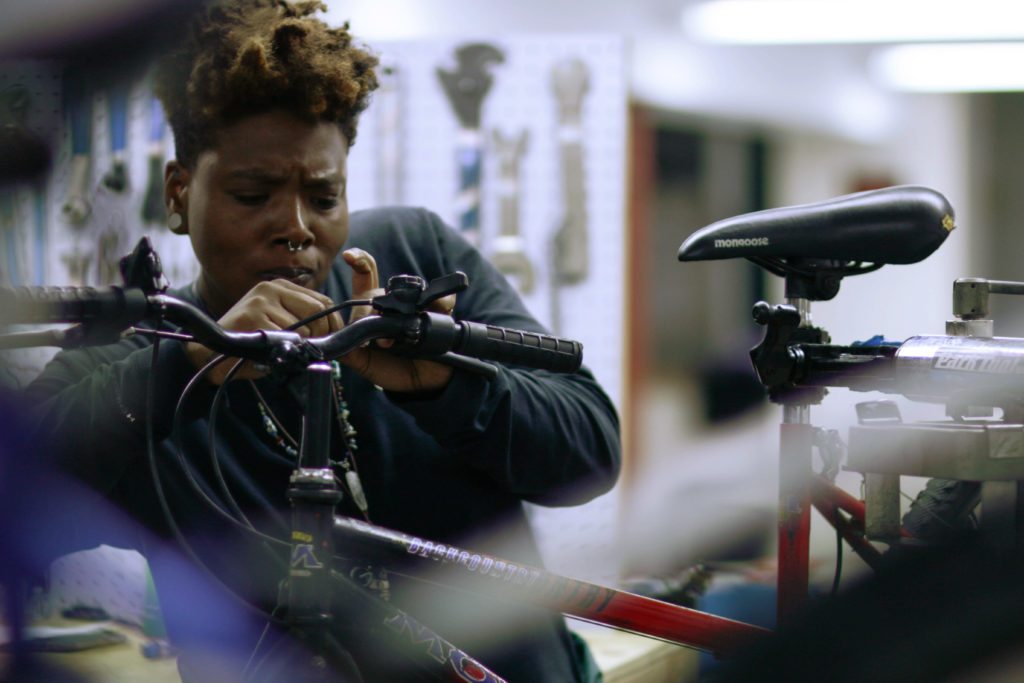 Another student works on her brakes. Photo: Kate Ryan

In 2013, Stavroula attended Bike!Bike! New Orleans, an international conference for bike collectives, co-ops and non-profit bike shares. She took her first workshop on running classes for women and the transfeminism community, and she was hooked.

“I kept waiting for someone else to start it or for someone who would teach classes with me,” she said. “And then I finally was just like, ‘the culture isn’t going to change until I just do this.'”

Stavroula said co-ops and community classes are the key to getting underrepresented groups involved in riding and repairing bicycles. She said it changes the culture and diversity of the space. That is why she and Shu Mei reached out to representatives from The Brown Bike Girl, a bicycle advocacy group dedicated to making the bike world accessible to communities of color, to be part of this class.

Skill-building was the class priority, but for Stavroula bike access is a social justice issue. “I think transportation is a really important part of feeling self-sufficient,” she said. “As is knowing how to fix what’s broken.”

She said there needs to be equitable access to transportation in order to get people across gender, race, and economic status on equal footing.

The sessions at Mechanical Gardens are free while a similar intensive might cost $200 elsewhere. Stavroula said that when you try to make something like this accessible to an underrepresented group, you first remove as many barriers as possible, including financial ones. 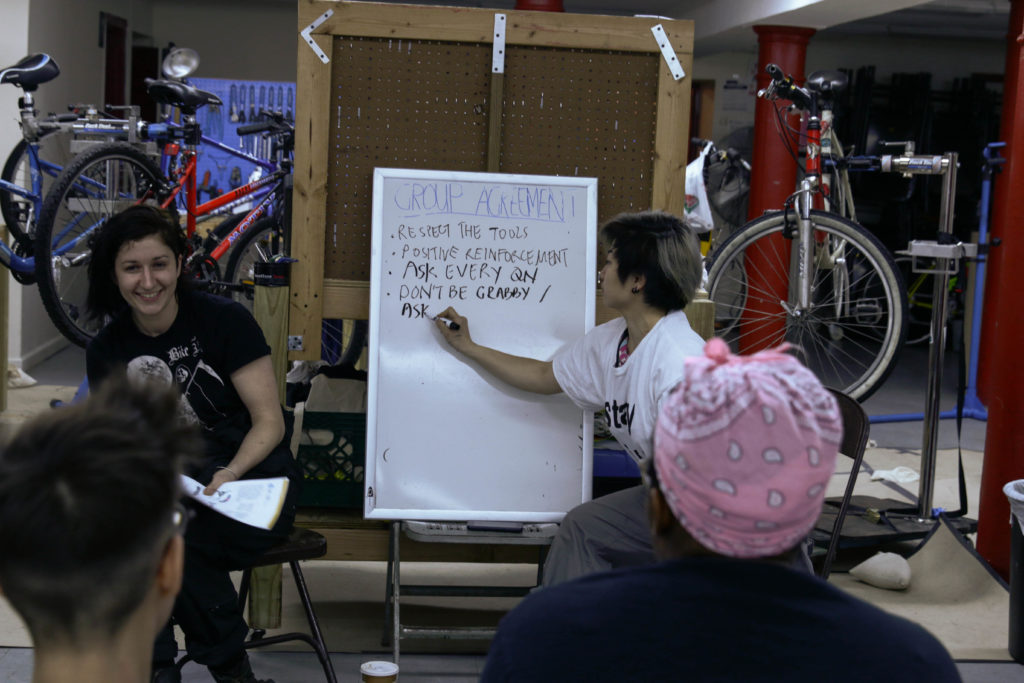 At the top of class, students sat in a circle and came up with a safe space agreement for the evening. Stavroula read the list of agreements she borrowed from Bike!Bike! to the group. When she finished reading, she asked them to put the list into more practical terms.

“Don’t take tools out of other people’s hands!” someone shouts.

“Don’t get grabby.” They all burst into laughter.

She said creating a set of rules in a space in which people may not have felt welcome before allowed the group to take ownership of and responsibility for the tools and each other. She said it also allows those who have varying gender pronouns to introduce themselves on their own terms.

The 15 students worked in groups throughout the night on four different bikes. They took breaks with snacks. They encouraged one another.

When class ended, everything was packed up and rolled into a closet. It’s a lot of work, said Stavroula, but the shared space has allowed Mechanical Gardens to get off the ground and focus on outreach. 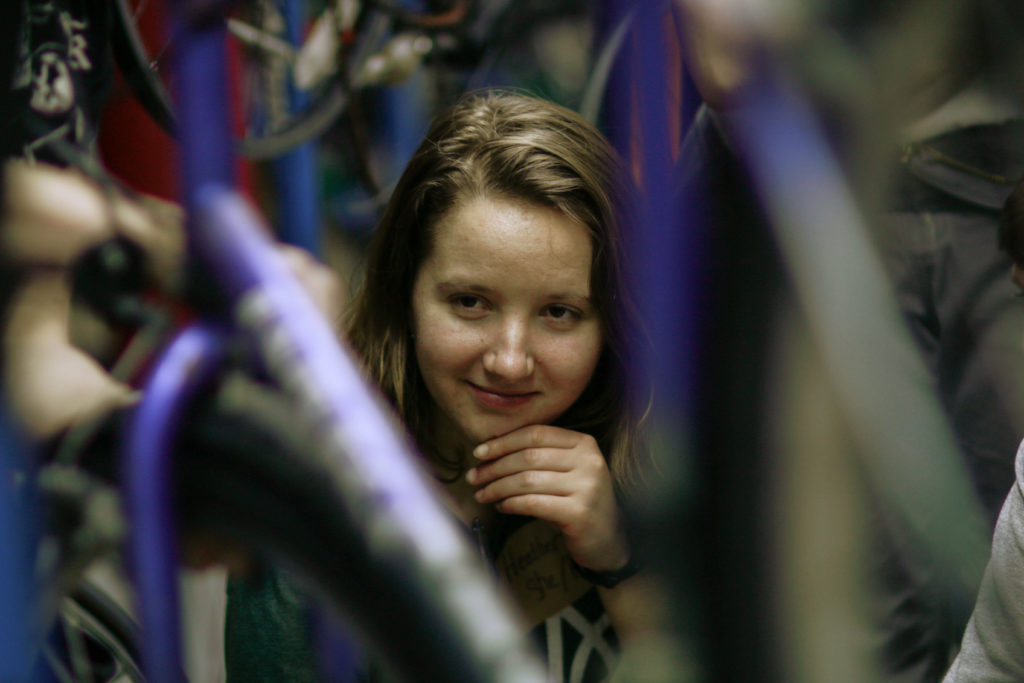 The church’s pastor, Rev. Jason Taylor, volunteered at Recycle-a-Bicycle for a while and mentioned starting a bike space within the church. The relationship grew from there.

Mechanical Gardens hosts one to two nights of programming each week. And every Monday, it holds open co-op hours in the church basement where anyone can bring their bikes and borrow tools to fix them up.

Stravroula said she plans to offer more classes to smaller groups during the next W/T/F series.

“Don’t be afraid to be confident about the knowledge that you have,” Stavroula said to the group as they examined their work. She said she hopes they will start advocating for themselves in pro shops and begin to diagnose problems with their own bikes. “That’s the real goal that I’m trying to achieve, to get more and more knowledge out into the world.”

Email bikecoopnyc@gmail.com for more info about upcoming sessions and follow on Facebook for upcoming events. Drop-in hours at Mechanical Gardens are 6-9pm on Mondays at St. John’s in Brooklyn, 195 Maujer St.