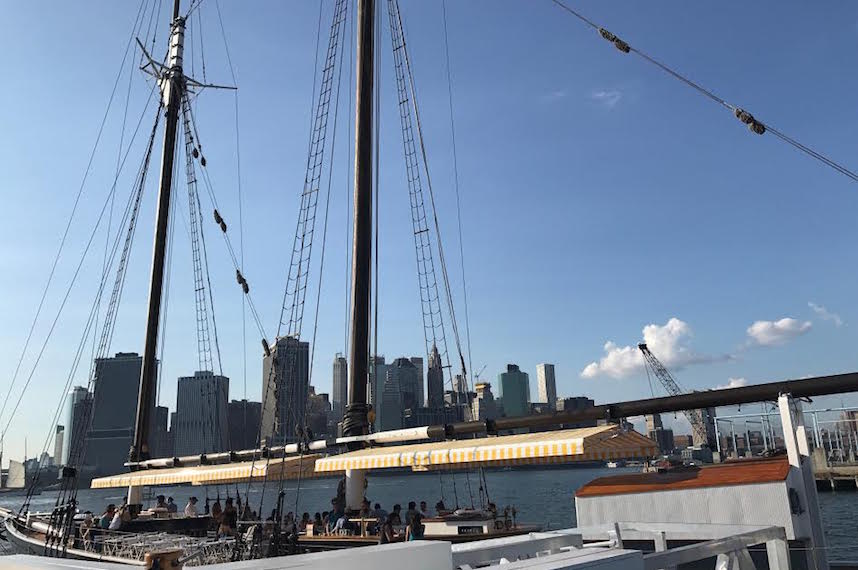 Tucked into idyllic Brooklyn Bridge Park, amongst native plants, playgrounds, soccer fields and bike paths, a small boat sits docked at Pier 6, which just opened to visitors last summer. It’s Pilot–a 100-year-old schooner with a rich history. The ship has been refurbished to serve up oysters, cocktails and light bites for the summer season. This is Brooklyn’s newest, and certainly it’s most oyster-forward, bar on a boat.

Pilot is small enough that you might miss it while enjoying the scenery, but when you do find it, you start to wonder whether you’re still in New York, or if you’ve magically appeared on a shorefront in Cape Cod. The boat is located on Pier 6 in the park, docked on the north promenade. Just follow along the path upon entering the park, and you’ll see it glistening in the sun. Upon boarding, you may be surprised by the rockiness of the boat, but lo and behold–the East River makes waves, even during weeknight happy hour. 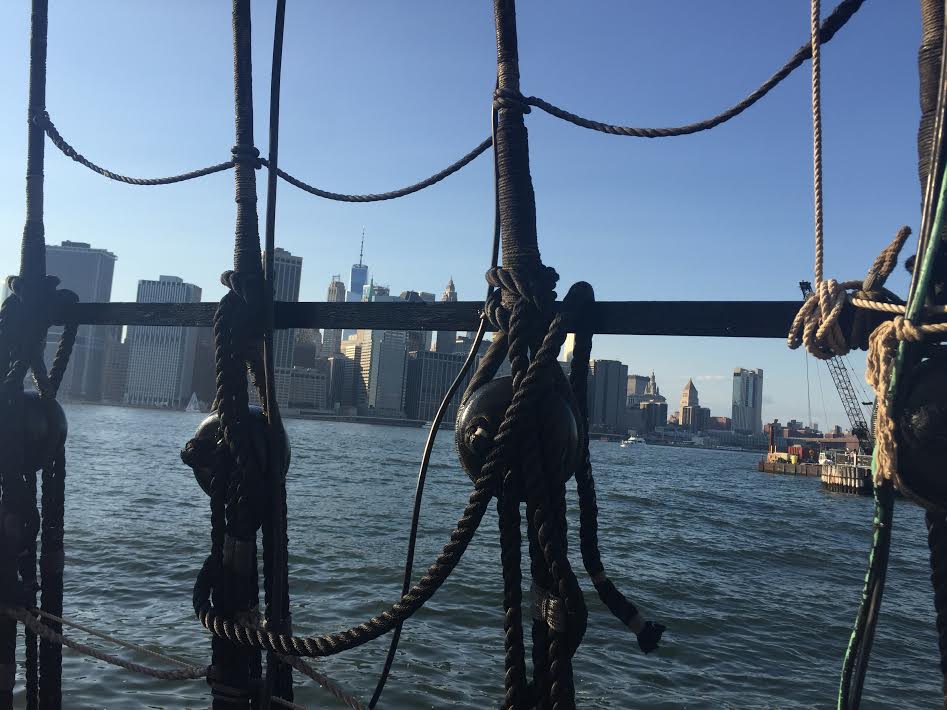 Pilot is Brooklyn’s newest, and most oyster forward, floating bar.

Pilot is shiny, bright, and perfectly nautical with gold accents, yellow and white-striped awnings, and clean marble everywhere. The seating is strategically set up–as strategic as it can get on a floating restaurant–regular bar on one side, oyster bar on the other, and general seating in the center and along the sides. Word to the wise: Take a seat at the oyster bar if you’re especially interested in watching the masters shuck for hours on end. And plan ahead with this one–you can make reservations from their site and it’s well worth the trouble. 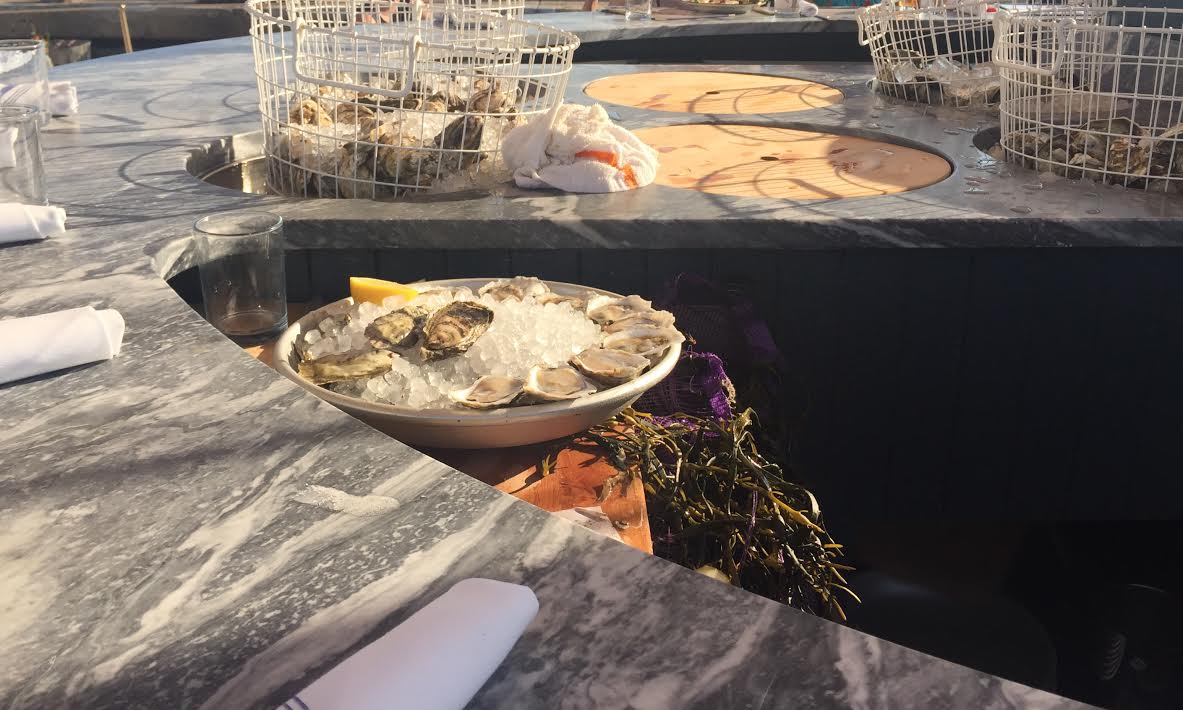 Come for the oysters, stay for the view.

Unfortunately, the staff didn’t seem quite as pleased to be there as the rest of the passengers. Maybe they were just disoriented, since the restaurant’s opening is still fresh, or perhaps the sun, or the waves, got to them a bit. But part of the excitement of sitting at the oyster bar is learning about the different varieties of oysters from the shuckers, which certainly didn’t happen.

Still, the menu presents a good selection of drinks and bites. The cocktail menu offers beer, wine, and a variety of summery drinks including Life at Sea (vodka, blackberries, mint lime) and the popular Spirit Animal (light rum, Aperol, coconut, lemon, strawberry.) If you’re trying to get the full experience, go for a flight of oysters hailing from origins including New York, Massachusetts, and British Columbia. They come elegantly presented on a platter with salt, seaweed, and with toppings such as cocktail sauce and what seemed like a seaweed oil (there wasn’t a lot of elaboration on the part of the shuckers). 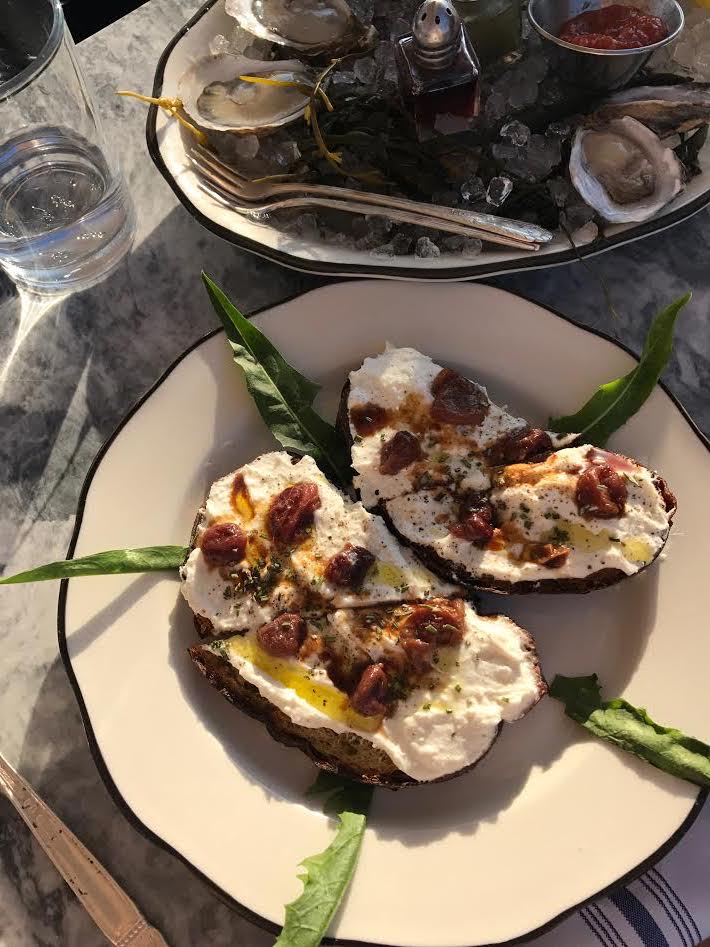 The ricotta toast paired perfectly with the brininess of the oysters.

Non-oyster plates include a fresh scallop ceviche and a tomato and watermelon salad. The softshell crab po’boy and lobster roll both seemed to be making the rounds quite a bit, but I opted for something a little less overtly sea-themed. That meant ordering the ricotta toast–potato bread topped with ricotta, roasted grapes, rosemary, dandelion, and pomegranate molasses. Sounds like a lot of things happening at once, but it was the perfect texture and flavor after the brininess of the oysters.

It was the view that really stole the show, though. In between bites, it was hard not to stare across the water at downtown Manhattan or at other boats going by, with passengers eyeing Pilot, likely making a mental note to check the place out for themselves before it pulls up its anchors come October.