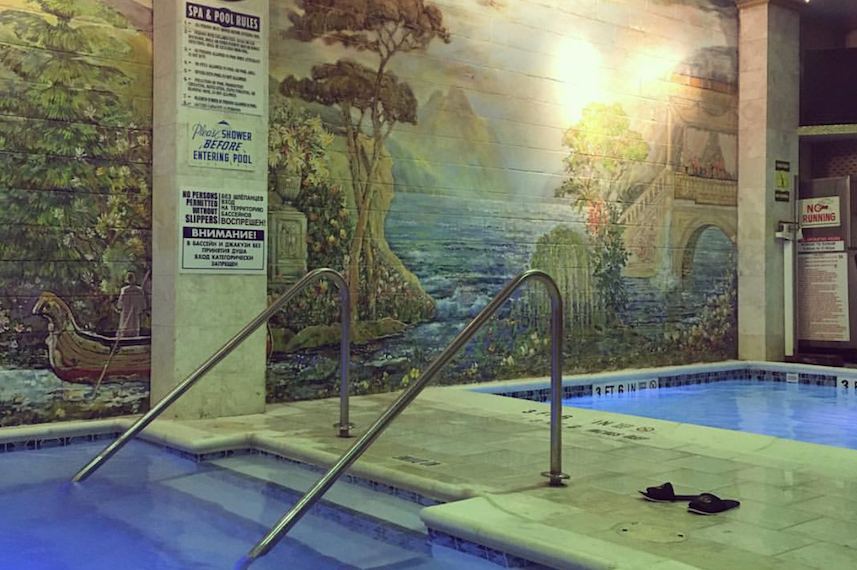 Rows of hairy men sweat it out, their paunches sagging gently in their laps like cats waiting to be stroked. Between bouts in the sauna, they put the world to rights over rounds of vodka, largely ignoring the younger clientele, like the gaggle in bikinis who treat this shvitz as a spa date. A rowdy family commandeers a long table to celebrate a birthday with borsht and piles of steaming garlic potatoes. And almost everyone, except for me, speaks Russian.

This is the scene at the Brooklyn Banya, a Russian bathhouse hidden amidst the auto repair shops and warehouses of Coney Island Avenue. Here in Brooklyn, we live in close quarters with one another’s cultures, yet how often do we crossover in a meaningful way? The banya is as much a social club as a place to slow roast oneself, and it’s open to everyone.

My curiosity is twofold; beyond the appeal of ritual steaming, my ancestors were Russian. I can trace my family back to Yitzak Okun, a man with piercing eyes and a wiry beard, born in 1850 in a small village in what is now Belarus. Ten of his eleven children, including my great-grandfather, Yanna, immigrated to New York. Yanna and my great grandmother settled not far from the where the banya is now.

Back then, citywide bathhouses offered a place to wash when few homes had hot water, but over the course of the 20th century almost all shut down, and the remaining were closed during the AIDS crisis. Apparently there has been a resurgence of interest, with a younger clientele attracted by an “authentic” New York experience. That, and Groupon discounts, of course.

I once tried to talk to my Grandma about our heritage, but she patted my hand and said “We’re Americans now,” and our Russian past died with her.

Suffice it to say, I don’t know how to shvitz.

The banya is housed in a repurposed garage with a corrugated roof, though they’ve done their best to disguise the fact. Strings of plastic foliage loop around the balcony with classical statuettes and gold lions presiding over the bathers below. One wall is painted with a mural of a Romanesque scene evoking some mythic past, though which mythic past is unclear. The lighting is a little too bright and I can hear the generator buzzing in the background, at least when the music isn’t playing. Russian music videos dominate the flat screen TV.

But none of these things matter. Or if they do they’re part of the experience.

Descending the staircase from the women’s changing room—presided over by Lucy the cat with her green eyes and condescending stare—it’s hard to know where to start. There’s a wet and dry sauna, a steam room, a jacuzzi, and a cold pool. The theory is subjecting your body to varying hot and cold temperatures, strengthens your metabolism and increases your circulation, ultimately improving your immune system. At the reception they offer extras from the self-explanatory Swedish massage to purchasing your own venik, bunches of oak leaves, with which to beat oneself to ramp up that circulation. This treatment is known as platzka, and if that proves daunting, an in-house “platzka man” will do the honors. I hear he’s called Oleg; I want very much for this to be true. 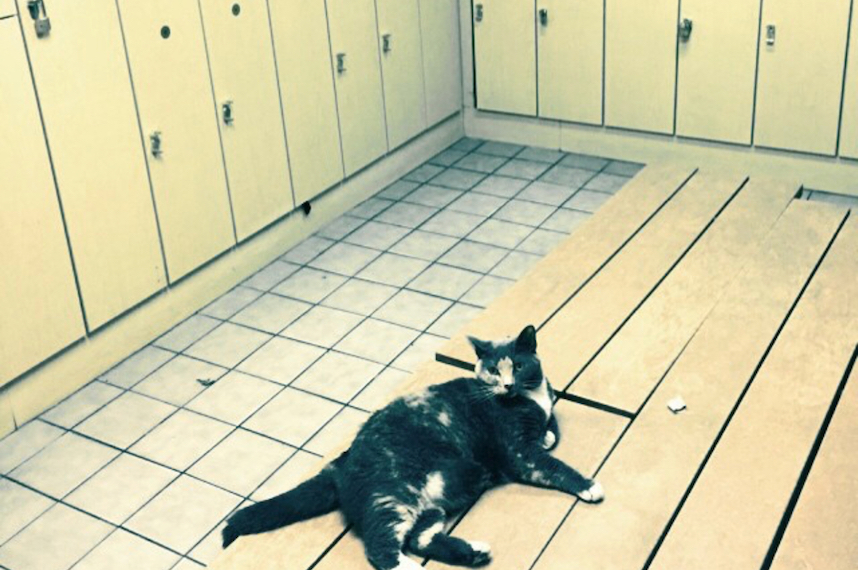 I seek out banya veterans to copy. They wear felt hats to protect their heads from the heat and wield their oak branches with expert flicks of their wrist, creating a rhythmic thwack against their hot wet skin. I can’t help but think of penitents beating the sin from their bodies, though I know this is quite different. (Actually, I don’t know, and maybe beating the sin from the body is also good for the circulation? Who am I to say?) 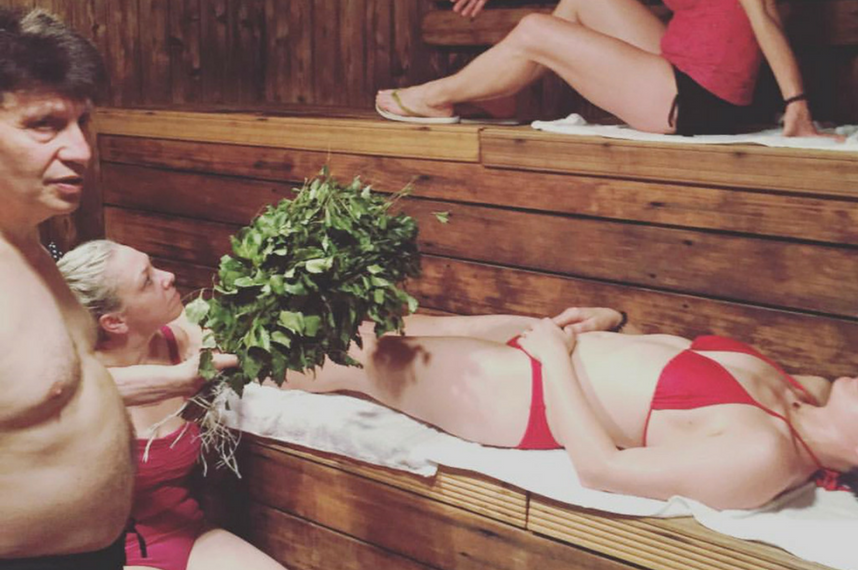 For the full banya experience, book yourself in with the “platzka man” who will get your circulation going by beating your body with a bunch of oak branches. Photo: Liz Reisch Picarazzi

The wet sauna seems the place to start. There are six people in here with me and it’s so hot I can feel the heat on my eyeballs. I don’t know the etiquette. Do I say hello to my fellow bathers? Is it rude to chat? I have forgone the venik as it’s my first time but a lady wafts hers occasionally as if swatting flies in slow motion. Then a small fuzzy man in the front row stands and empties a bucket of cold water on his head. With no words exchanged, a young woman gets up and he dumps a bucket over her head, too. Together we enter a surreal ceremonial dance, the six of us in the sauna, standing, soaking, sitting, and silent the whole time except for the splash of water against our swollen sticky bodies and the gasp that follows. The panic of the heat subsides, and the rhythm lulls me into a sweet stupor.

I stagger out after fifteen minutes straight into the cold plunge, my whole body suddenly alive and tingling, and I think about my ancestors who might have rolled in the snow to cool down instead.

After a few rounds I reach a state of complete equanimity. It is impossible to think of anything, and I wonder if this is the true appeal. Beyond the socializing and health benefits of a good sweat, the sensory indulgence empties the mind of everything beyond the banya. Russians have been doing this at least since the 12th century; I’m pretty sure they’re onto something.

In keeping with custom, we order some pickled herring and vodka. Some folks go upstairs to smoke cigarettes on the roof deck and I fear for their freshly steamed bronchioles. The mistress of the banya, both fearsome and fabulous, delivers our food with no niceties—she isn’t rude, just refreshingly no-nonsense. The herring is delicious.

To finish my visit I head for the steam room. Steam pours out of a vent (guarded by a crate to stop people from burning their legs) and my fellow bathers disappear into a wet fog. A voice calls out, gentle and somber, singing a lulling prayer song that makes my heart ache for a life I’ve never known, transporting my mind to that small village in Belarus where perhaps we had a platzka man of our very own. The singer stops. “I’m sorry, do you mind if I sing?” he asks with a heavy accent. “It’s good for my…” he says, coughing gently to explain. And we, anonymous bodies in the steam, unite in our assent.