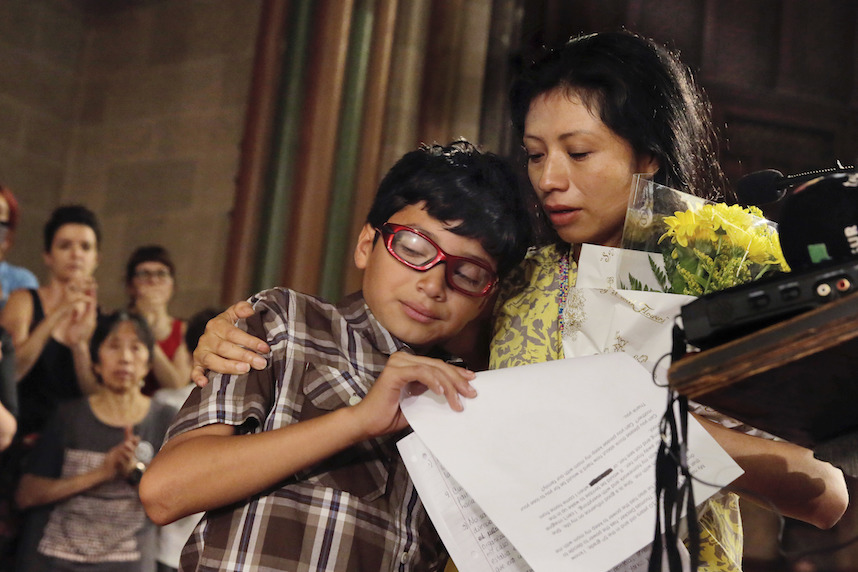 Debora Berenice Vasquez-Barrios at a press conference at Saint Paul & Saint Andrew United Methodist Church, where she is taking sanctuary after a deportation order that would force her to either abandon or bring her 10-year-old son and two-year-old daughter, both natural-born citizens, back to Guatemala. Photo:AP Photo/Richard Drew

The Trump administration’s ever-changing immigration policy and the way it’s split up families may have you appalled, frustrated and wondering what you can do to help.

The New Sanctuary Coalition of New York City’s L.I.F.E.- Live In Faith Everyday – Bond Fund, works to bail out detained immigrants so that they can fight their cases surrounded by supporters instead of from behind bars. Funds like these are one of the fastest ways to reunite immigrant families according to advocates. Since it began last year through an anonymous donation, the program has helped free more than 32 immigrants from incarceration, including a blind young man who suffers from cerebral palsy, a teen who spent her 18th birthday in a Texas jail and a mother who was separated from her eight-year-old child for 14 months.

The fund is just one of the many ways this interfaith coalition aids immigrants at risk of detention and deportation by federal agents who are using increasingly aggressive tactics. Earlier this year, NSC’s very co-founders, Ravi Ragbir and Jean Montrevil, were detained by Immigration and Customs Enforcement, and in Montrevil’s case, deported.

“Honestly we have so many emergencies,” said NSC Supervising Coordinator Sara Gozalo, “from people being arrested at ICE check-ins, to people taking physical sanctuary. Accompanying friends and families to hearings where they may be ordered deported, or may be given their freedom. Accompanying friends to their asylum interviews. Preparing asylum cases pro se. You name it. We work with an average of 70 friends every week at our immigration clinic and do an average of 20 accompaniments every week.”

Her use of the word friends is deliberate.

“We do not believe we ‘help’ anyone,” said Gozalo. “We stand in solidarity with our Friends (the term that we use for our affected community members) as they lead their fight for freedom and dignity.”

On July 7, a group of members is headed to Tornillo, Texas, where they will protest and bear witness to the tent city created to jail minors, one of the disastrous consequences of the Trump administration’s zero-tolerance policy against asylum seekers and migrants at the southern border.

Locally, the group has been fighting for social and economic justice for immigrants since 2007. Its pro se clinics empower immigrants to aid in their own legal defenses without lawyers, and its immigration clinic helps people facing immigration proceedings plan for and understand their cases. 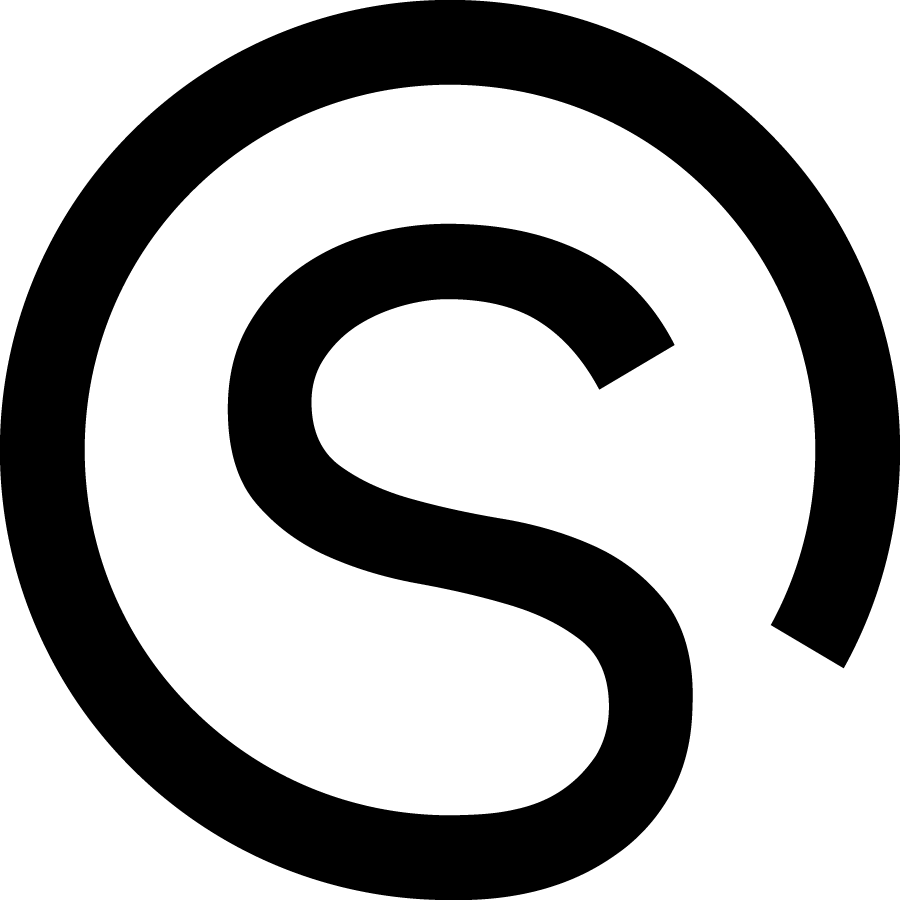 The universal symbol of sanctuary for immigrants at risk of deportation or detention.

Their namesake programs, Sanctuary Congregations and SanctuaryHoods, protect those threatened with immediate deportation. ICE deems houses of worship, schools, and hospitals “sensitive locations” and will not generally enter to detain anyone, but privately-owned buildings can set their own terms regarding who can and cannot enter. “Therefore the Coalition has begun to create teams of volunteers to visit neighborhood institutions and stores, asking them to establish their own policies of not permitting ICE agents to enter unless they have a judicial warrant for a particular person,” said Gozalo. They are given Sanctuary stickers to display, letting immigrants know that it is a safe space to go to if they fear a pick-up or raid.

In response to Pablo Villavicencio’s apprehension when delivering a pizza to the Fort Hamilton Army Base, for instance, NSC is working to train residents and business owners to make the area around the base a SanctuaryHood. It is also providing sanctuary for three families in New York, including 32-year-old Debora Berenice Vasquez-Barrios, a mother living in Westchester, who took sanctuary with her youngest child, a two-year-old, in Saint Paul & Saint Andrew United Methodist Church in Upper Manhattan after ICE ordered her deportation. She could either return to Guatemala with her two-year-old and 10-year-old, both natural-born citizens, or leave without them—an impossible decision and a reminder that ICE has been separating families throughout the country, not just at the border.

NSC also holds an accompaniment program which supports families going through the immigration process by pairing them with trained volunteers who accompany them to their ICE check-ins and hearings for moral support and to hold immigration authorities accountable. It has also made bailing immigrants out of detention centers more effective.

“Accompaniment has made this fund even more effective on both an individual and systemic level. After immigration judges see New Sanctuary accompaniers in court, they tend to set a lower bail (sometimes up to $20,000 less than in similar cases in the past) and offer bail in cases they would not have considered previously, changing the whole bail system to a degree that we hope to increase,” said Gozalo.

It was this accompaniment program that brought NCS to the attention of Indivisible Brooklyn, a local activist group that resists the Trump/Republican agenda and promotes progressive policies, civic engagement, and coordinated action.

“Indivisible Brooklyn became interested in working with NSC last year in March when we learned about their accompaniment program,” said Indivisble volunteer Ginger Albertson. “We worked with our members to get them to accompaniment trainings and attended a rally with NSC. And in May 2017, Ravi Ragbir, the executive director, came to our group to talk about NSC and their work, which was when our membership really sealed our commitment to supporting NSC. With all of our activist work, there has been ebb and flow, but we’ve consistently had members taking part in accompaniment to ICE New York offices and hearings, and in the asylum workshops.”

While the L.I.F.E. bond has been successful in getting people out of detainment, it is now nearly exhausted, and all proceeds from Indivisible Brooklyn’s Dance for Justice benefit at Littlefield on Thursday, June 28 helped replenish the fund.

The fundraiser was about more than just raising money, though. It’s also “to raise awareness about the incredible work that NSC is doing, and has been doing for a long time,” said Albertson.

“Many of us…believe that NYC is a Sanctuary City,” she said. “This is totally false: people are being snatched away from their families and put in detention regularly and have been for years. NSC brings accountability to the process. When they lead volunteers into an ICE office for a friend’s check-in, that ICE officer knows (s)he cannot simply disappear that person as they do with so many other people regularly. When NSC and volunteers accompany friends to ICE hearings, the judges rule more favorably because they see the community that cares about what happens to the friend. NSC has actually changed the narrative, too, by changing the language used to describe New Yorkers in the deportation system. They taught us to use the term “friend” instead of immigrant. Because the people facing the cruel ICE system are our friends, our neighbors, our countrymen and women, and we should all be fighting in whatever way we can to protect their right to be here.”