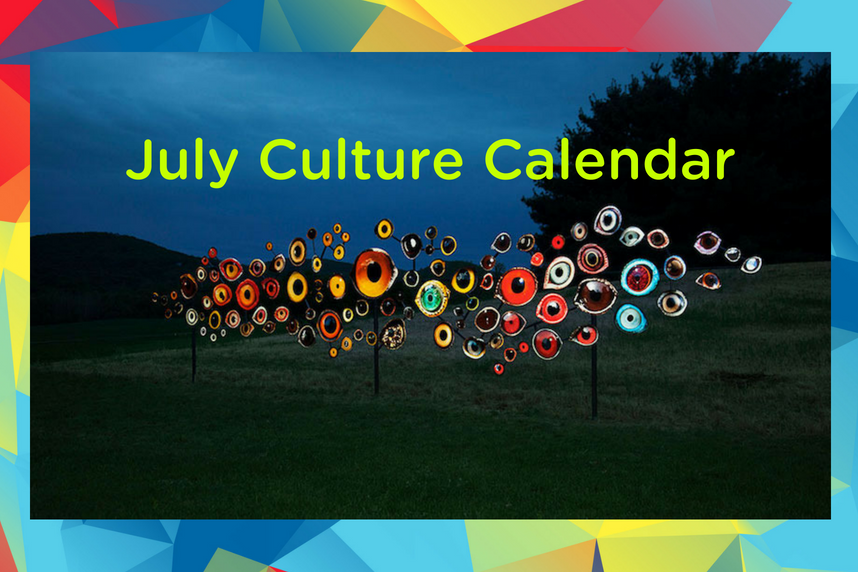 If you’ve forgotten what New York City feels like when we really hit the dog days of summer, the near-100 degree temperatures coming down the pike will be a startling reminder of just how ungodly uncomfortable it can get around these parts in July. I’m heading up to Maine this week for a blissful long weekend away from the swelter, but when I get back I expect to be making lots of trips to the Rockaways (mmm, I can almost taste the Connolly’s pina colada as we speak) and otherwise hugging my air conditioner for the next several weeks. Of course, that’s no way to really make the most of a summer in Brooklyn, and I’m way too restless to really be content if that’s the schedule I have on the books. In reality, I’m sure I’ll be biking around like a maniac as I always do, exploring new neighborhoods that feel exponentially harder to get to when the days are shorter and jackets are required.

The truth is that we don’t live in this town for the pastoral landscapes or the easy, breezy lifestyle—we’re here because it presents as broad a spectrum of cultural opportunities as any place on the planet, and taking that for granted (as I have for the past few months due to a humanly impossible amount of work) feels like a waste of a precious gift. This month, there are a million ways you can interact with art, music, literature, entertainment, and creativity, many of which we’ve rounded up for you here, so choose the ones that sound appealing and get out there and live your best July 2018! 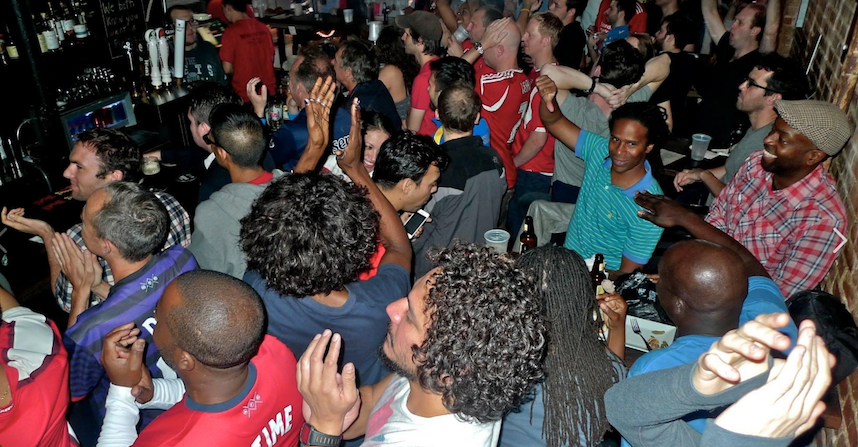 World Cup fever is here, despite Team USA being shut out this year, and if you haven’t had the chance to really get into it yet this time around, you’ve still got plenty of time before the championship match on July 15. The New York Times published this handy guide of the best places in the city to root on specific teams, but if you don’t have a particular dog in this fight you can always take in a game or two at Woodwork or Threes Brewing or Under the Archway in DUMBO or Nowadays, or any number of other bars that have gotten in on the action. If nothing else, the tournament is a great display of how many different nationalities are represented in this city, and how passionate people are about supporting their team. 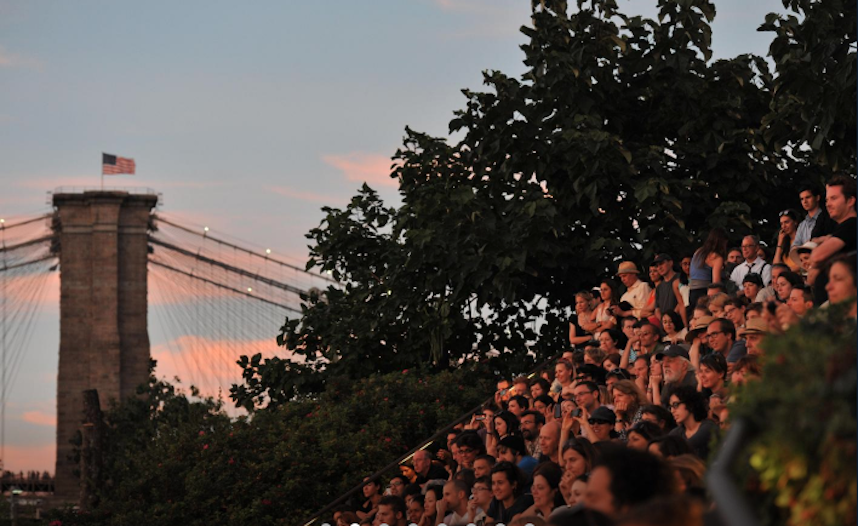 2. Books Beneath the Bridge, July 9

July 9 marks the return of Books Beneath the Bridge, a lovely summer tradition of readings, Q&As, and book signings by notable writers on the Granite Prospect steps in Brooklyn Bridge Park. For six consecutive Monday evenings, a different independent bookshop will sponsor and curate the event, which is totally free to attend. Although the lineup is not totally finalized, some highlights that have already been announced include an appearance by Sloane Crosley on June 30 and an outdoor edition of Greenlight Bookstore’s quarterly Poetry Salon on August 6. The first event of the season will be produced by Powerhouse Books, with appearances by Chelsea Hodson (Tonight I’m Someone Else) and Julie Buntin (Marlena) on July 9. 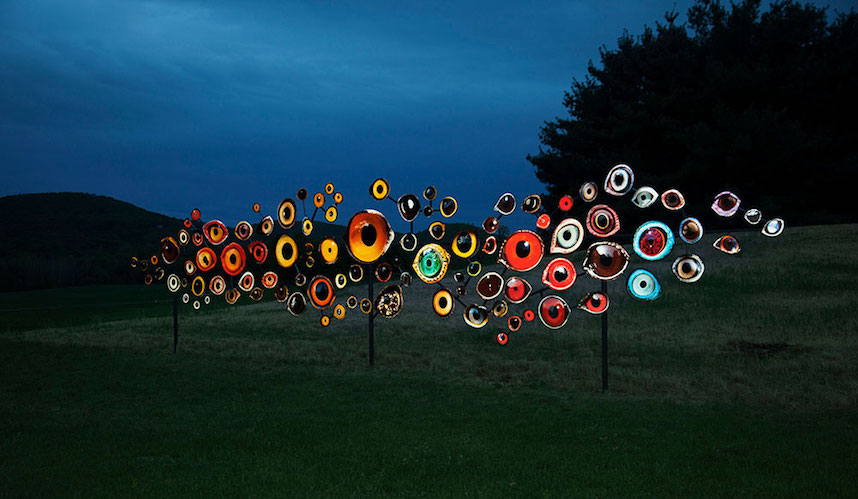 Indicators: Artists on Climate Change has already been on display at Storm King since May 19, but I’ve been MIA all spring thanks to a ridiculous workload so I’m not going to make it up there until this month. That’s fine by me, though, because when I visited the outdoor sculpture park last October during peak Instagram-time I was mildly irritated by the crowds so I’m hoping the dead of summer = less people trying to recreate Master of None. This exhibit represents the response of 17 contemporary artists, including Maya Lin, Jenny Kendler, and Mark Dion, to the various challenges presented by climate change, and it includes ten new site-specific installations created especially for Storm King. It runs through November 11.

Related: Storm King Day Trip: You know you’ve been meaning to check it out 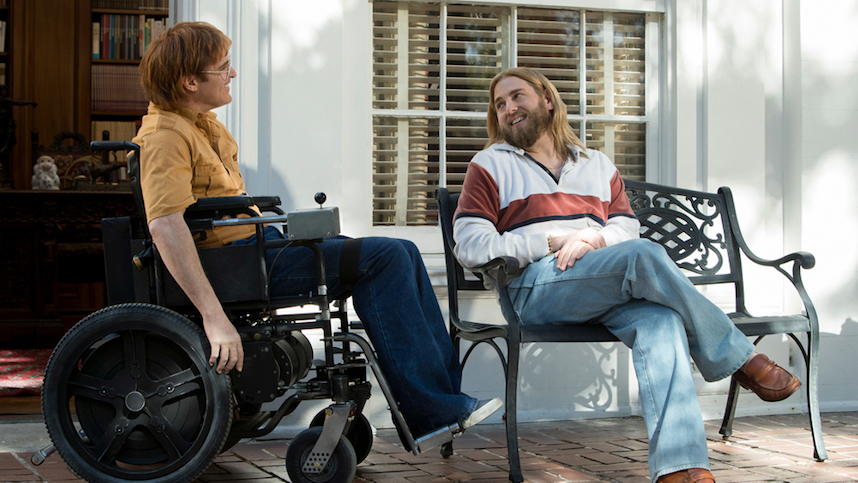 Don’t Worry, He Won’t Get Far On Foot, Gus Van Sant’s latest movie based on the memoir of cartoonist John Callahan, opens on July 13 and it sounds like the summer blockbuster of 2018 for non-superhero flick types like me. A well-known character in his hometown of Portland, Oregon, Callahan was as irreverent and un-PC as they come, and he maintained his trademark sense of humor even after an accident rendered him quadriplegic. Joaquin Phoenix plays him in a performance that’s getting lots of advance buzz, and with Jonah Hill (who I guess is supposed to be the person in that picture?) and Rooney Mara rounding out the cast, I think it’s safe to expect some pretty fine acting in this one. FWIW, there is already talk of awards consideration. 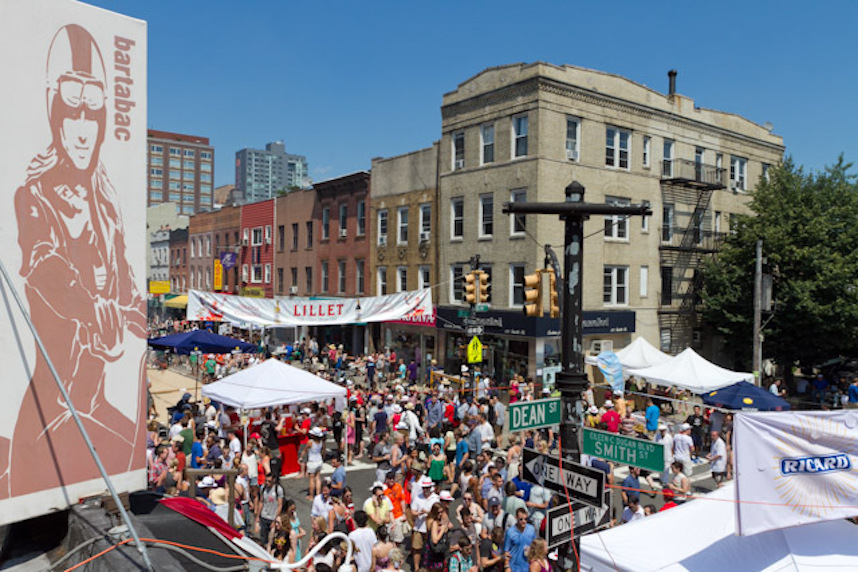 On Sunday, July 15, head to Smith Street for Bar Tabac’s 16th annual Bastille Day party, where you can celebrate all things Français, including delicious food and drink and a massive petanque tournament that necessitates shutting the entire street down and filling it with sand courts. The affair runs from 10am-8pm and historically draws some 20,000 revelers, so expect to be thoroughly ensconced in Francophilia. 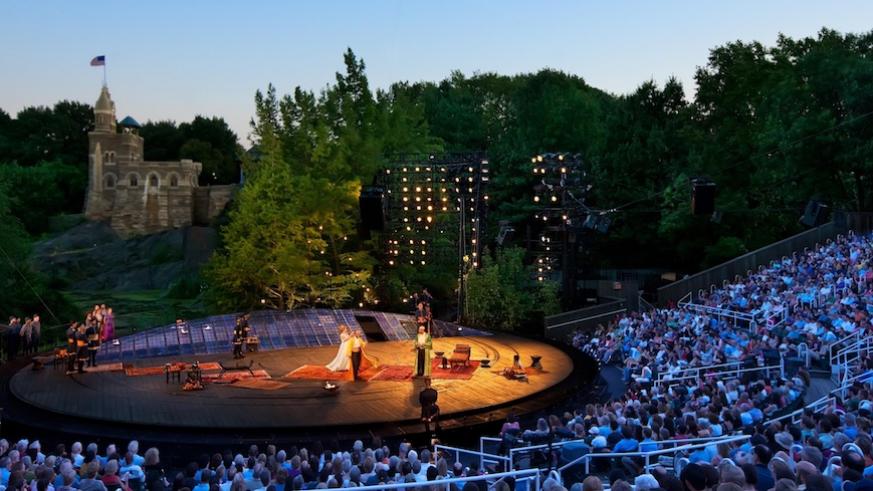 This summer’s second Shakespeare in the Park production, Twelfth Night, opens on July 17 at the Delacorte Theatre for a five-week run. This play, which explores romantic love, gender constructs and proto-feminist themes, is one of my favorites that I read when I studied Shakespeare back in college. I’d be excited to finally see it performed live anyway, but this rendition is extra special as it’s a musical adaptation featuring two rotating ensembles of community members from all the boroughs and it looks really fun and modern. As always, tickets to Shakespeare in the Park are free but you gotta hustle a bit to get one. 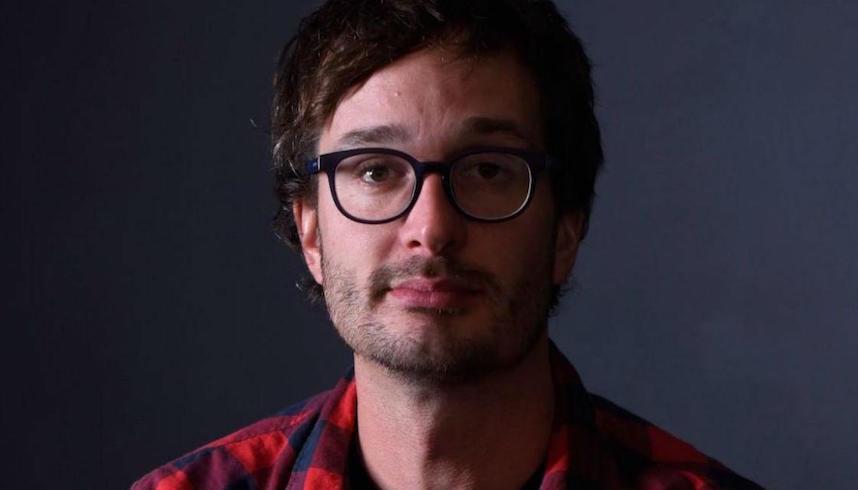 On a recent trip to Mexico City, my sister and I tried valiantly yet in vain to convince my cousin to give up a day in town to explore La Isla de las Munecas, an island several miles off of the mainland that is home to hundreds of extremely creepy abandoned dolls in varying states of decay which are said to be possessed by the spirit of a young girl who drowned nearby decades ago. I don’t know why I am so obsessed with the existence of this place, but I think that it means I’m a good candidate for a new Netflix travel show focused on “unusual and often macabre” tourist destinations around the world. Dark Tourist, which is not to be confused with the poorly-reviewed Melanie Griffith movie of the same name, comes out on July 20 and is the brainchild of Kiwi journalist and filmmaker David Farrier, whose previous credits include Tickled, a 2016 documentary about competitive endurance tickling (yup). 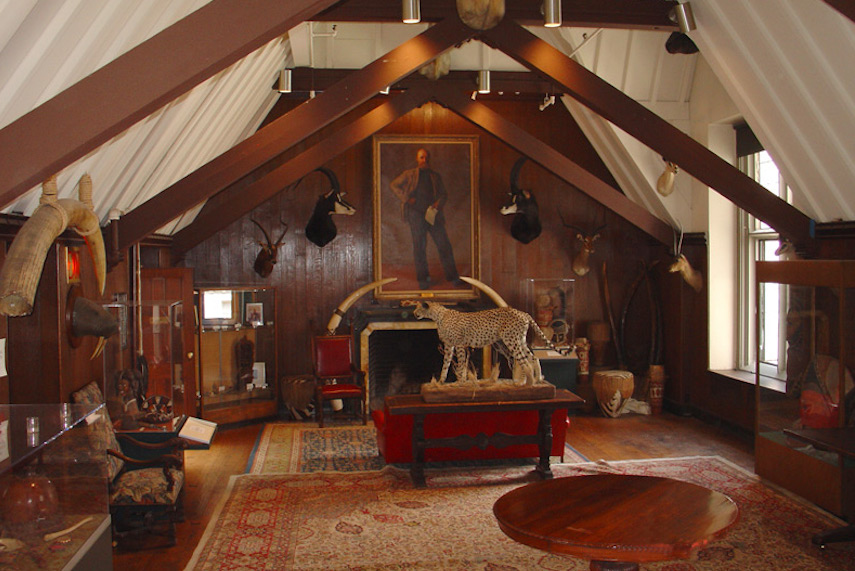 If you can manage a day off on Tuesday, July 24 (or even just a faked midday doctors appointment), head to midtown for a rare chance to see the inside of the legendary Explorers Club, the historic gathering place for illustrious individuals like the first people to reach the North Pole, the bottom of the ocean, and the moon. Atlas Obscura is organizing a two-hour tour that will cover all the artifacts, maps, and oddities you can think of, and even some you can’t, like a yeti scalp and a whale penis. Tickets are $45 and the tour begins at 11am. 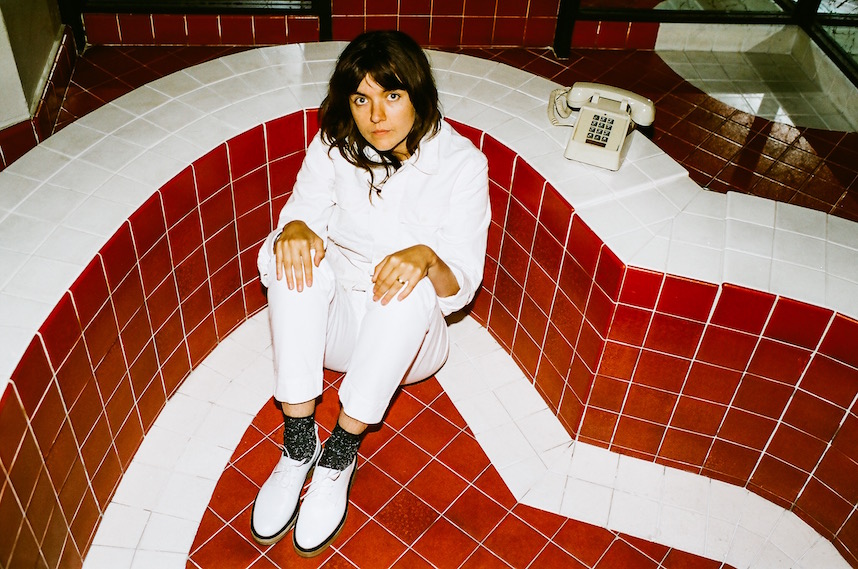 I have been working so much this spring that I’ve barely had a chance to take advantage of ANY of the cool stuff that happens around these parts every year (don’t even get me started on how little I’ve done the NOT cool stuff, like working out), and I am starting to get frustrated about it. So, with you all as my witness, I hereby proclaim that nothing will make me miss seeing Courtney Barnett in Prospect Park on July 26. The BRIC Celebrate Brooklyn! Festival concerts are one of the best perks of living here, and though this one isn’t free, it’s definitely worth the price of a $40 ticket to me to see Barnett, who I’ve never seen live and whose new album, Tell Me How You Really Feel, is really terrific. I will even drink a Bud Light Limearita or Shocktop or whatever weird drinks they always have for sale at the bandshell for some reason because, goddamn it, I am HAVING FUN and not thinking about my job for once. Please come join me! I am keeping fingers crossed that Kurt Vile makes a surprise appearance as well—hey, it could happen. And my friends who are much more musically in the know than me say that opening acts Julien Baker and Vagabon are great, too. 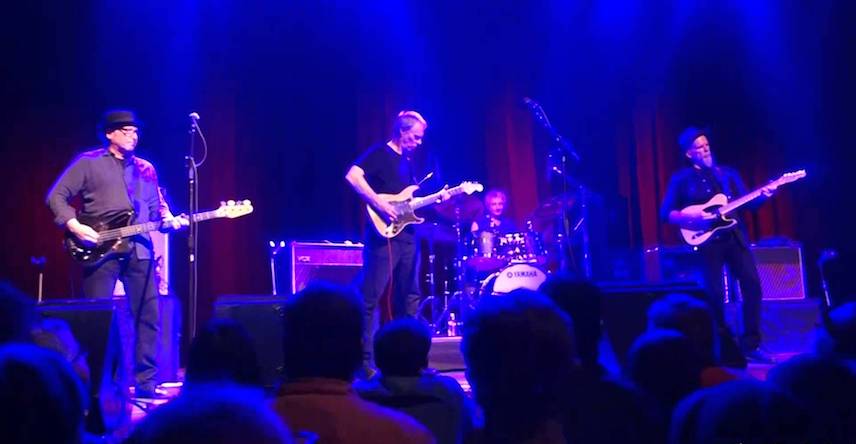 While Barnett represents a new generation of alternative rock, one can’t forget those who helped shaped the genre. In that case, Television can be regarded as the forefathers. Emerging from the downtown New York City punk scene during the mid-‘70s that included the Ramones, Blondie and Talking Heads, Television melded punk attitude and angular-sounding art rock into something so distinct and influential; a key part of that sound was the legendary guitar interplay between Tom Verlaine and Richard Lloyd. The band’s 1977 debut and masterpiece, Marquee Moon, still ranks high on those best albums lists. Television (sans Lloyd; in his place is guitarist Jimmy Rip) is playing at Elsewhere on July 31; expect the band to draw material from Marquee Moon (which celebrated its 40th anniversary last year) and its underrated follow-up Adventure.—David Chiu 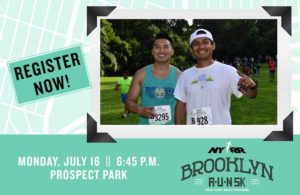 {Sponsored} Monday Funday, anyone? Don’t forget to get yourself—and your friends—signed up for the NYRR Brooklyn R-U-N 5K in Prospect Park on Monday, July 16 before it sells out! After cruising through the park to live music, all runners will receive a Brooklyn local People’s Pops popsicle at the finish (on top of the awesome New Balance hat when you pick up your bib). Also, be sure to stick around after for the post-race party with food vendors, lawn games, drink specials at The Adirondack and Threes Brewing, and much more. Register today at mynyrr.org.