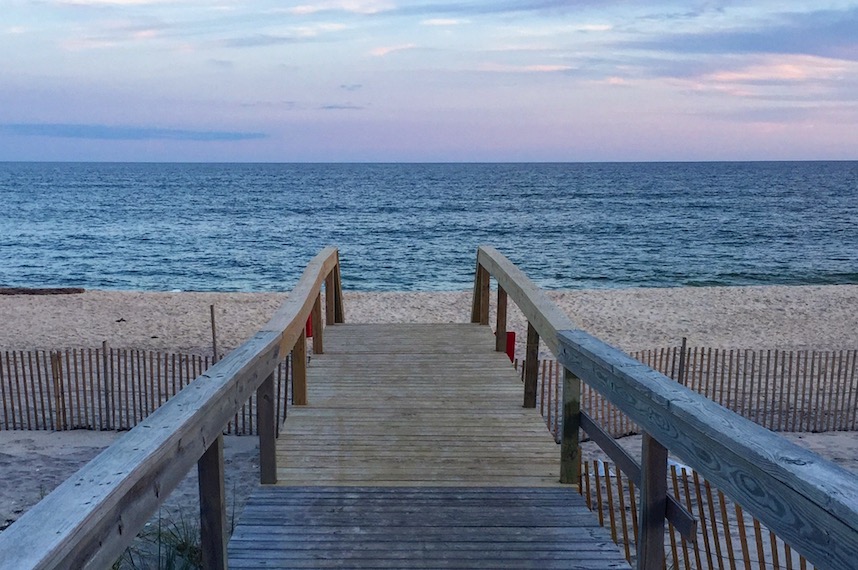 Not a kid in sight. Photo: Objet-a.com

It was a bittersweet year. We moved from Williamsburg to Westchester and suddenly I was waiting for school buses, carpooling to soccer practice and eating at mediocre family-friendly restaurants. The kids were happy but the extra space wasn’t compensating for my beloved Brooklyn.

Then, in early June, as we were marking our one-year anniversary in the burbs, the ultimate invitation arrived from our Brooklyn friends: Come to Fire Island—no kids!

We had been before —to Fair Harbor, Lonelyville, Dunewood, Atlantique with one strange night in Ocean Beach. Those trips were “all joy”—watching my 2-year-old run toward the raging ocean, scorching my feet on playground sand waiting for naptime, when I could sit under a fan and read. At night I cooked in a hot, buggy kitchen and said things like “Fire Island is so unique!”

But this was going to be different. The house, which belonged to our friend’s boss, was in The Pines. It is Fire Island’s “Chelsea with sand,” a beach town for gay men with the island’s most expensive real estate and two-thirds of its swimming pools. (Next door, Cherry Grove is traditionally known as a summer idyll for lesbians.)

Neither we, nor our friends who are also straight, had ever been to The Pines. I knew that it was not a vacationland meant for us and that I would feel like a fish out of water there, but maybe that would be ok. I was looking forward to an escape.

We boarded the ferry sweaty and baggy and late, and stood stunned by rows of perfectly punctual gorgeous men with compact suitcases. The Pines was instantly elegant and tasteful—starting with the shiny aluminum wagons for carting luggage, all neatly parked, each in a designated space. Muscles in tank tops were everywhere. The house was beautiful, clean, stylish with a full bar and modern art. (The last time we were in Fair Harbor, our landlady accused of us stealing one of her horrible landscapes—which was just insulting on so many levels.)

The house instructions began: “The first thing you should do is go to the hot tub and put the temperature up to the highest level, 104.” Next, we were told to pull the rosé out of the terracotta wine cooler, “Sit on the patio and drink the bottle.”

We were schooled in the ways of The Pines: low tea started at 4 (drinks at the Blue Whale); which led into fun tea (drinks and dancing behind the Canteen). The party then raged during high tea at Sip & Twirl and ended around dawn at the Pavilion. We were advised not to attend the Underwear Party “unless you are feeling adventurous and you are wasted.”

That first night we checked out fun tea—body to beautiful manicured body dancing in tight clothes—sexy and decadent. We mostly watched that night, embarrassed by our sedateness and outsider-status. We ate dinner at the Blue Whale around 9pm and it seemed like we were the only ones eating. Even our waiter seemed to be partying elsewhere. He would occasionally jog in to ask, “Are we having fun? Is everything delicious?”

On the beach the next day, there were no kids or women (except for us). Surrounded by high-end sunglasses and tiny dogs, I watched a naked man eat a giant floppy English cucumber. For our lunch, we ate burgers at the Canteen, where again we were mostly alone in our sloppy pursuit of food. Just as we dug in, the red-headed owner ran over to us, knocking over little ketchup cups and our free tap water. “You’re in the fire zone!” he cried, desperate to move us. He shoved our table into the corner and then seemed relieved when we were out of sight.

But that evening, after napping on expensive patio furniture and finally drinking that rosé, we decided to give tea another go. We ditched the baggy beachwear for something tighter. I put on lipstick. We met up with our friend’s coworkers and suddenly we were part of the crowd, sipping fruity punches and screaming positive thoughts over the loud club music. When it was time to hit fun tea, it had started to drizzle. Many of the guys, like the one in a leather bustier and his friend in the see-through white shorts, whipped mini-umbrellas out of thin air. We were the ones with matted hair and running eye makeup.

When a sudden downpour sent half the men fleeing, the DJ cranked it. “It’s Raining Men” burst from the waterproof speakers and suddenly we were dancing like maniacs in the warm summer rain. It was glorious—we were neither insiders nor outsiders but sensual, joyful bodies lost to a familiar song, completely uninhibited and free. Free of our conspicuousness, of our self-consciousness, of our unintended adulthood, of our kids.

We ate at home that night and drank champagne as if it were a celebration.