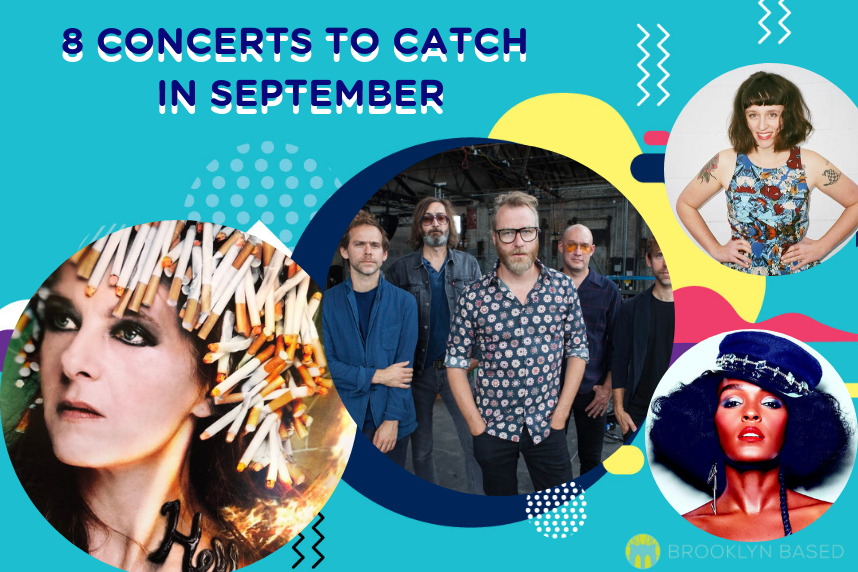 Even if this past Labor Day signaled the unofficial end of summer, the concert scene in New York is still heating up this September. For starters, the Bell House in Gowanus is celebrating its 10th anniversary with a series of shows, including an appearance by Ex Hex (September 7). Led by guitarist extraordinaire Mary Timony, Ex Hex released its excellent debut album Rips back in 2014; its melodic punk rock with a bit of glam hearkens back to groups like the Runaways. Making a return to Brooklyn, the group will reprise songs from the record and perhaps throw in some new material for that upcoming follow-up record. On that same weekend, Waxahatchee—the moniker of singer/songwriter Katie Crutchfield—will also be at the Bell House (September 9), performing music from her first two albums—including last year’s well-received Out of the Storm—along with her new EP Great Thunder.

Like Crutchfield, another indie rock artist who’s been a critical favorite of recent years is Will Toledo, the driving force behind the band Car Seat Headrest. Toledo, who will be performing at Brooklyn Steel (September 14 and 15), has been a very prolific recording artist with several albums already under his young belt since 2010. His guitar-driven, lo-fi sound could be akin to the Cars and Beck. (We interviewed Toledo back in 2015 before the rest of the world caught on). Earlier this year, Car Seat Headrest released an entirety re-recorded version its 2011 album, Twin Fantasy, for Matador Records.

And it’s not just these new kids on the block dominating the concert scene—a few legendary and influential musicians will be in town to usher in September as well. Most notably is MC50, a project fronted by guitarist Wayne Kramer of the legendary late ’60s Detroit rock band MC5, one of the forefathers of punk rock. The group’s highly-charged classic debut, Kick Out the Jams, is marking its 50th anniversary, and Kramer (who recently published his memoir The Hard Way) will be playing music from that incendiary record at Irving Plaza (September 17) — backed by a stellar cast of players: Soundgarden’s Kim Thayil; Fugazi’s Brendan Canty; Faith No More’s Billy Gould; and Zen Guerilla’s Marcus Durant. Given the perilous state of the world today, the revolutionary music from Kick Out of the Jams seem relevant now more than ever.

Another pioneering act coming to Irving Plaza is British veteran electropop legend Gary Numan (September 22), who catapulted to stardom in the late ’70s first as a member of Tubeway Army and then as a solo artist with his signature hit “Cars.” Now recognized as a pioneer of industrial music (Nine Inch Nails has regarded him as an influence), Numan is back on the road again in support of his most recent album Savage (Songs from a Broken World). If you missed him last year at Brooklyn Steel, you got another chance to see him this time at Irving Plaza.

Additionally, the great Neko Case—who has carved a pretty unique and acclaimed career as both a solo artist and as a member of the Canadian power pop group the New Pornographer and the supergroup case/lang/veirs—will be at the Beacon Theatre (September 20). The singer-songwriter (who is mentioned in the upcoming new book, Women Who Rock, a collection of essays about influential female musicians edited by Evelyn McDonnell) recently put out another excellent album, Hell-On. That record is a showcase of the observational and introspective stories she’s been known for, sung with that eloquent and resonant voice of hers (Check out the lovely cover of the Crooked Fingers song, “Sleep All Summer,” in which Case performs a duet with former Screaming Trees singer Mark Lanegan).

These days, it’s great to be singer Janelle Monae. Since her breakthrough appearance on fun.’s smash song “We Are Young” from 2011, Monae has charted a hugely successful career with her distinct and futuristic-minded amalgam of R&B, hip-hop, fun; it’s no wonder artists such as Erykah Badu, Duran Duran, Brian Wilson, OutKast, Pharrell, and Grimes have collaborated with her. And she’s not only a threat as a charismatic and confident singer—Monae has also distinguished herself as an actress with roles in the acclaimed films Moonlight and Hidden Figures. The star will headline Bustle’s first-ever Rule Breakers Festival (September 22 at the LeFrak Center at LakesideProspect Park) and no doubt perform songs off her recently-lauded album, Dirty Computer, containing such notable tracks as the sexy Prince-influenced “Make Me Feel,” “I Like That,” “Pynk,” and “Django Jane” and maybe even the deep cut, “So Afraid,” a wonderful and sobering ballad.

Ending the month on a tremendous high note is Brooklyn-by-way-of-Cincinnati’s The National. The lauded indie rock band, whose most recent album was Sleep Well Beast, is performing two concerts at Queens’ Forest Hills Stadium (September 29 and 30). Given the multiple number of solid support acts opening for the band that weekend, these are not just merely shows but day-long events. In addition to The National for both shows, Saturday will feature Jason Isbell and The 400 Unit, Cigarettes After Sex, Phoebe Bridgers, and Adia Victoria, while Sunday’s scheduled line-up consists of Future Islands, Cat Power, U.S. Girls, and Bully. Aside from enjoying a band known for its moody yet cathartic indie rock (Sleep Well Beast may be the band’s best effort yet) there’s another incentive for checking out the shows: through The National’s partnership with PLUS1, one dollar from each ticket sold will go to The Melting Pot Foundation USA to help the Brownsville, Brooklyn community via job training programs and access to healthy food.