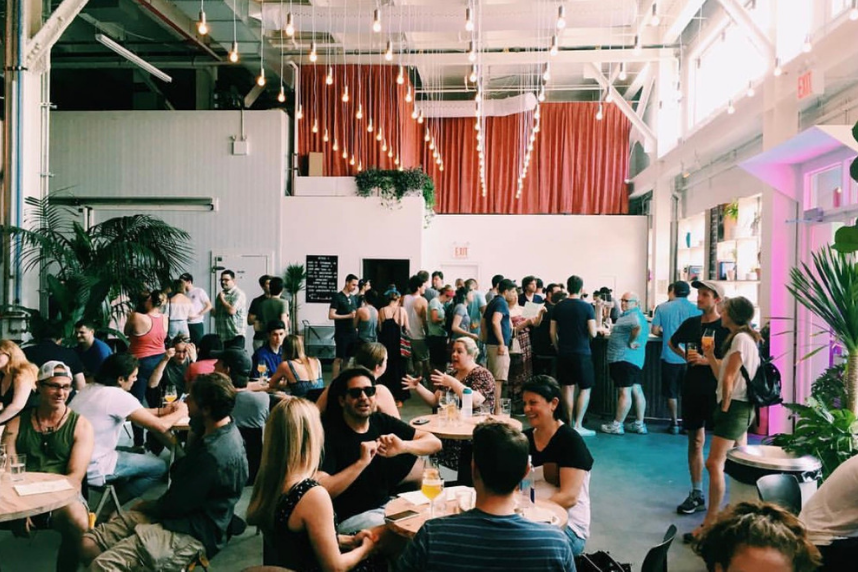 Although there are many things that I wish I could change about my last relationship (including, in the main, never getting into it in the first place), one of its vestiges that remains welcome in my life is my relatively newfound appreciation for really excellent beer. Before I met my ex, whose wealth of beer knowledge was both impressive and (I can say this now) often insufferable, I liked beer just fine, but my experience was more in the vein of Coors Light than the craft stuff. Through him, I learned that breweries like Oxbow in Maine, The Alchemist in Vermont, and Other Half here in Brooklyn are making a product that is light years better than most of the crap I’d been swilling at keggers in college and LES dive bars in my twenties. Even better, I discovered one of my greatest pleasures: sour beer, as well as the fact that Brooklyn’s own Grimm Artisanal Ales produces some of the best of that stuff you can get your hands on.

Until this past summer, Joe and Lauren Grimm, the husband and wife team behind the brand, were nomadic brewers, meaning that they rented out equipment at existing breweries to make small batches of their beer, which they then kegged, bottled, and canned (with some pretty awesome label art) and sold through specialty beer shops, craft beer-focused bars and, to my delight, the Gowanus Whole Foods. Despite this limited production capability, Grimm’s popularity grew apace, leading the couple to finally open their own tap room at 990 Metropolitan Avenue in June of this year.

Last Friday evening, after a particularly harrowing week at my primary hustle at a tech startup, I decided it was finally time for me to take the L to the Grand St. stop and check out the new Grimm spot for myself. I asked two friends from work to join me — one a beer connoisseur from Vermont who was wearing a Hill Farmstead tee the first time we met, the other a native of New Hampshire, the state with the highest per capita beer consumption in the country. We arrived at about 5:30, posted up at the bar, and were immediately impressed by the beautifully designed, well-lit space, which has ample seating and an abundance of plants.

The bartenders were definitely hipsterish, but lacking attitude, and were especially kind when, in a moment of incomprehensible clumsiness, I projectile spilled my second glass of the Super Paradise Gose (which is a deep ruby color and my favorite of the sours I tried) all over the blonde wood bar. My drinking buddies stuck with the IPAs, and were especially impressed with the Cloud Landing. As the night went on, a crowd of laid-back beer lovers who were distinctly older than I expected, given the neighborhood, filled in and we were grateful for our seats. We thoroughly enjoyed some snacks from Samesa, the onsite purveyor of on-trend Middle Eastern inspired food like beet hummus and chocolate tahini brownies, and had a good gossip session about our co-workers past and present over a fun 80s pop soundtrack. We split at about 8 and went on to our respective Friday evening plans — mine involved a date with a new guy I’m seeing who is obsessively into wine, weirdly — but not before I picked up a 4-pack of Super Paradise to tide me over until my next trip out to East Williamsburg.