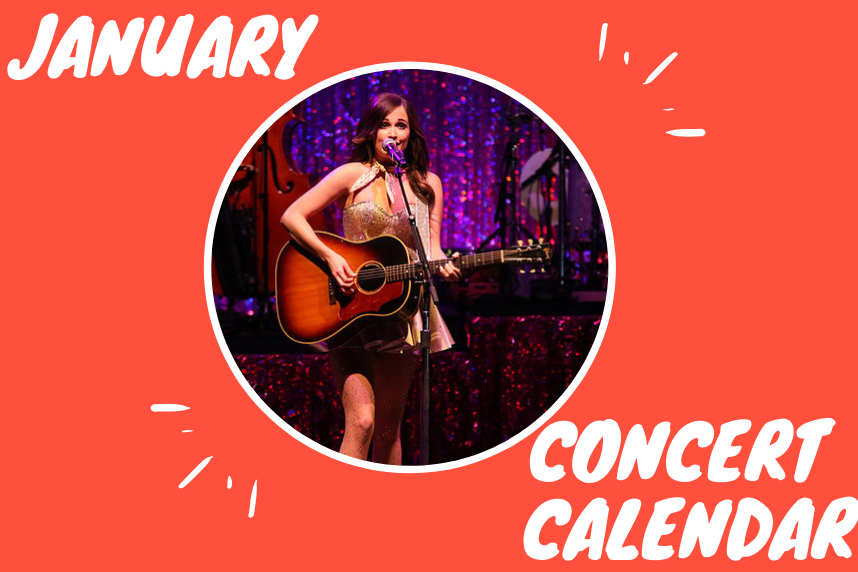 Just because we’re slowly getting over our holiday hangover doesn’t mean the musical fun from 2018 is over. So far this new year is getting off to a great start with a couple of must-see shows this month to shake off those winter blues. Spanning the genres of indie rock, jazz, country, and R&B, here are some recommended concerts for your consideration.

Imagine being a young jazz artist whose band features an all-time living legend. That’s the charmed life of the acclaimed pianist/composer Emmet Cohen, as his eponymously-named trio has the great jazz bassist Ron Carter (best known as a member of the great Miles Davis Quintet from the ’60s) within its ranks. The esteemed jazz magazine Downbeat once said of the pianist: “Cohen isn’t turning out cheetah-fast melodic lines for the sake of flash. And he’s not overcompensating. His nimble touch, measured stride and warm harmonic vocabulary indicate he’s above any convoluted technical showmanship.” Fresh off their latest album, the lovely and elegant Masters Legacy Series Vol. 2: Ron Carter, the Emmet Cohen Trio will perform a string of shows at the Village Vanguard on January 15-20.

In the last two years, Michelle Zauner, who goes by the professional moniker of Japanese Breakfast, has emerged as one of indie rock’s formidable stars. Her second album, the atmospheric and dreamy Soft Sounds from Another Planet, was a universal favorite among music critics in 2017. Adding to that success, Japanese Breakfast has not only been touring diligently all over the place but also performed at several major rock festivals such as Pitchfork, Bonaroo, Coachella, and Panorama. Now Zauner makes another return to the Big Apple for two shows at Brooklyn Steel on January 17 (the first date not surprisingly is sold out) and 18.

In what will be a fitting precursor to Valentine’s Day, the R&B crooner Anthony Hamilton makes a stop at the Kings Theatre on January 19. With a gritty yet silky voice that hearkens the greats such as Marvin Gaye, Teddy Pendergrass and Maxwell, Hamilton has impressively mined romantic old-school yet contemporary soul for more than 20 years now. Last November, the singer unveiled his latest single, “Love Conquers All,” a powerful socially-conscious song that could be considered today’s equivalent of Gaye’s “What’s Goin’ On” in addressing such weighty topics as criminal justice reform and guns. As NPR music critic Ann Powers once wrote of Hamilton: “He’s always been the paragon of modesty, a great talent without much interest in bragging or high rolling. More than ever before, this music makes the case for his importance. Let him lift you up.”

It’s not often that the indie act Azure Ray play live, which makes this upcoming appearance at the Bell House on January 19 quite special. The duo of Maria Taylor and Orenda Fink emerged in the early 2000s with their atmospheric dream pop and became part of the Omaha-based Saddle Creek scene that included Bright Eyes and Cursive. Following a long hiatus that saw them embark on their own solo projects, Taylor and Fink resumed performing together in 2008 and has since done so on a semi-occasional basis. Last year, the duo released an EP, Waves, their first new release in six which not only highlights Taylor and Fink’s exquisite harmony singing and new compositions, but also features an electronic-tinged cover of R.E.M.’s “Nightswimming.”

Along with Brandi Carlile, it was a spectacular 2018 for country artist Kacey Musgraves. Her fourth album, Golden Hour, was a mainstay on many year-end best-of lists, and netted Musgraves four Grammy nominations, including Album of the Year. Golden Hour is not so much a country album per se, but also quite an engaging pop record, too. The acclaimed artist will be building on that momentum when she performs at the Beacon Theatre on January 25 and 26 as part of her Oh, What a World tour.

One of the greatest guitarists of all time, Richard Lloyd made his name as one of the founding members of the legendary New York City punk group Television during the 1970s. He and Tom Verlaine formed one of the greatest guitar tandems of all time, as evident on the group’s brilliant debut Marquee Moon. Now a solo artist, Lloyd is still a master on the axe as well as a wordsmith with his recent and wildly entertaining memoir Everything Is Combustible. Heading into his appearance at City Winery on January 26, Lloyd recently released his latest record The Countdown, so expect him to play cuts from that as well as some familiar Television and solo favorites.