Winter seems like a good time to hibernate, the perfect time to stay home and read books, catch up on shows and let all your muscles atrophy, but studies show that keeping active during the cold months is actually the better option. The winter blues are real and getting outside, exposing yourself to natural sunlight, and moving your body will help pass the months in a more blissful, healthy way. Here are a few winter sporting options that go beyond springing for expensive seasonal ski passes (although that’s great too if that’s your cup of matcha.) 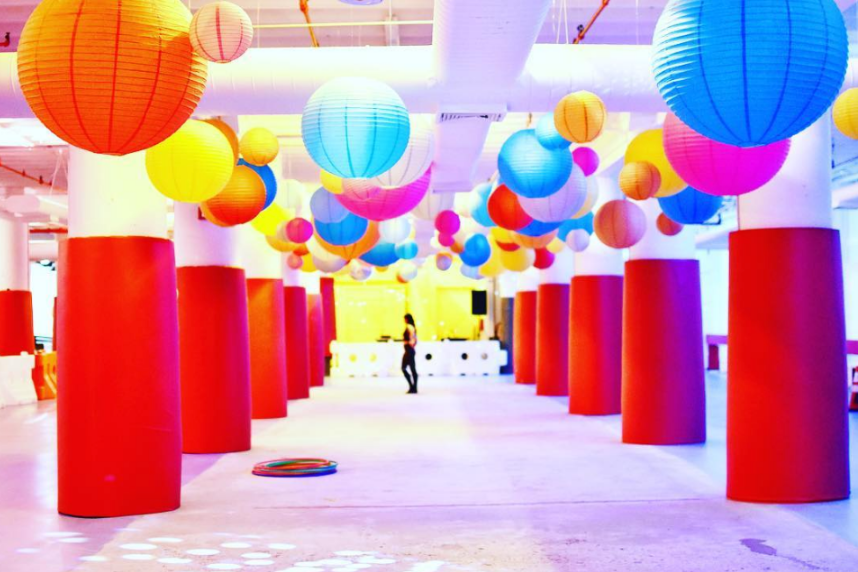 Roller skating is not as easy (or safe) as it seems. Photo: @dreamlandroller

The first thing to know about roller skating at the newly opened Dreamland in Industry City is that it is harder than it looks. Don’t be fooled by the bright colors, Instagram-worthy Japanese lanterns and unicorn backdrops. “Guests should be aware that roller skating is a sport,” a Dreamland spokesperson told me over email. It takes some practice to get the feel for it, especially as an adult who hasn’t been on wheels in decades. It’s actually a workout, and your muscles might be sore as you flail around the rink, clawing at the walls, your friends, or perfect strangers. We’ve heard first-hand reports of people getting hurt and it’s easy to see why, as one inexperienced skater going down can trip up those around him, making them all fall like dominos. Also, there is alcohol for sale, which can’t help the uncoordinated among us. The adult skate disco parties are reportedly crowded, making falls more likely. “Safety is our absolute first priority,” Dreamland says “We work very hard to ensure we provide a safe and fun environment. We also adhere to our capacity limitations and are extremely strict about not exceeding those limitations.” I went on a Thursday afternoon, and there were only a handful of skaters, giving me ample wall space to get my sea legs.  I had read some complaints on Yelp that included the fact that everyone must pay to go inside (even if you’re not skating), and that the rink is small (more like a pop-up), so I wasn’t surprised when I got there and found those not to be too big of a deal. Lola Star, the creator of Dreamland, was there greeting people, DJ-ing and dancing in glow-in-the-dark skates. Other complaints, like wait times, have been addressed by Dreamland with more check-in devices being provided. The biggest surprise was that I managed to have a good time, putting my worries of concussions on hold, while I flailed my heart out to Madonna. Tickets between $18-20 (including skate rental.) Please note: everyone needs to pay to get in, even if you just plan on watching, so you may as well try skating. Also, phones aren’t allowed in the rink, and if you fall carrying an iPhone in your back pocket, you will most likely crack the screen.  Note that adult skate nights often sell out in advance, and arrive early to ensure you can rent skates in your size. 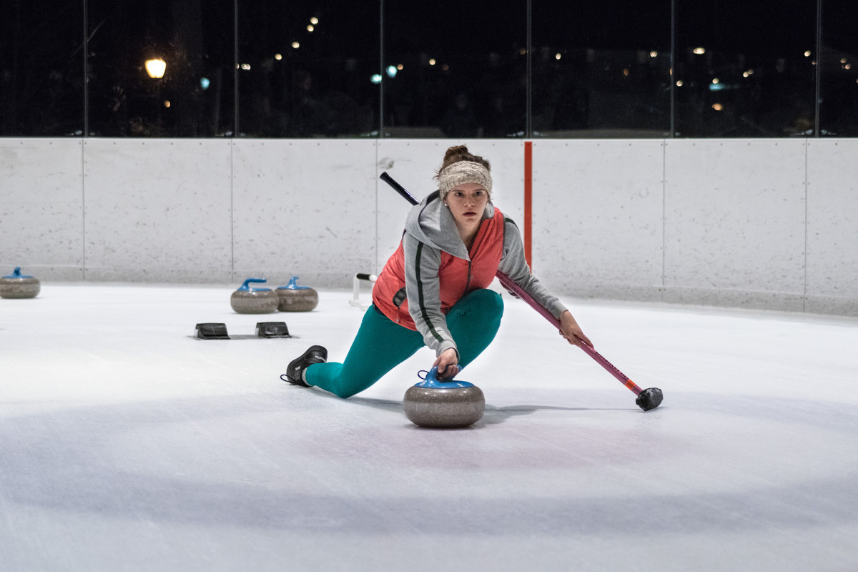 Curling is a game that requires finesse; they don’t call it “chess on ice” for nothing. Photo: Miska Draskoczy

Have you been completely obsessed with curling since the winter Olympics? You would not be the only one, and for those interested anyone can try the sport right here in Brooklyn. The Brooklyn Lakeside Curling Club has over 100 members across three leagues, but you don’t have to be a member to take an introductory class. “Anyone can learn the rules and the basic mechanics of curling in a 90-minute Try Curling class. ($65 for ages 21 and up.) “The better you get, the more you can attempt challenging shots,” says Charles Donefer, a volunteer coordinator for the league. “It’s called ‘chess on ice’ because the very best curlers have the accuracy and skills to be able to think many moves ahead.” For those unfamiliar, the sport features two teams of people sliding a large granite stone across the ice in order to get it as close as possible to a target called “the button.” In order to do that, one team member delivers the stone, while “sweepers” use a broom to clear a direct path. “Curling is more of a ‘finesse’ sport in which physical power is useful, but there is an upper bound after which there are declining returns,” Donefer says. “That is one of the reasons why curling is among the most gender-balanced sports, with top men’s and women’s curlers competing together in mixed doubles.” It’s a collaborative effort, according to Donefer, and since it’s such a niche sport, there is a tight-knit community. Anyone can do it, and it just requires the motivation, putting on a pair of grippers over your shoes, and possibly some “loud pants.” The most important part of learning the game is getting into the spirit of the game. “In some sports, the loser pays for the first round of drinks after playing. In curling, it’s the opposite,” Donefer says. 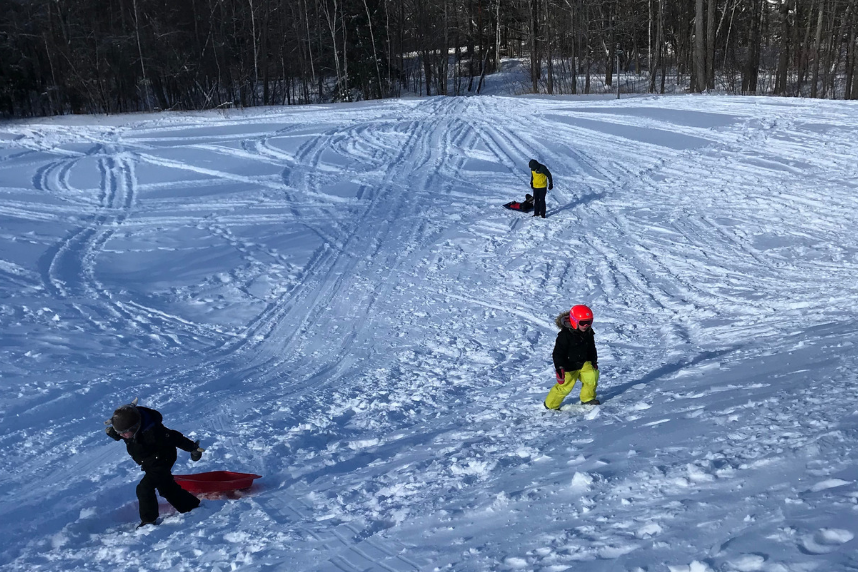 If you thought sledding was child’s play, try walking up a steep hill over and over again. (Photo: Antonio De Pietro)

Sure, all the toy stores in Brooklyn have practically all closed, but hardware stores, supermarkets, and drugstores are filling in the gaps. Brokelyn has a 2016 article on where to find sleds that should give you some ideas. Now, off to the slopes! Long Meadow at Prospect Park has gentle hills which is great for youngsters who might not have much stamina and may not want to go too fast on their first time out. This is not a secret and so also gets pretty crowded since it’s right off the street, so adjust your expectations accordingly. Fort Greene Park has a giant hill with varying degrees of steepness. It’s possible to really gain speed here, so if you’re with a group of daredevils, it can feel nervewracking. But because there are so many sides of the hills, this park doesn’t feel as crowded as other locations. Dog Hill Park in between Brooklyn Heights and Dumbo is one of the more undiscovered sledding locations. The hill is steep, and the dog park is completely enclosed, so you don’t have to worry about kids running out. The only caveat is that buried under the snow is dog poop, so make sure there is enough snow to prevent sliding into a pile. Also, there are usually dogs that like to chase alongside the sleds barking. Depending on your love for pups, this might be a deal breaker. 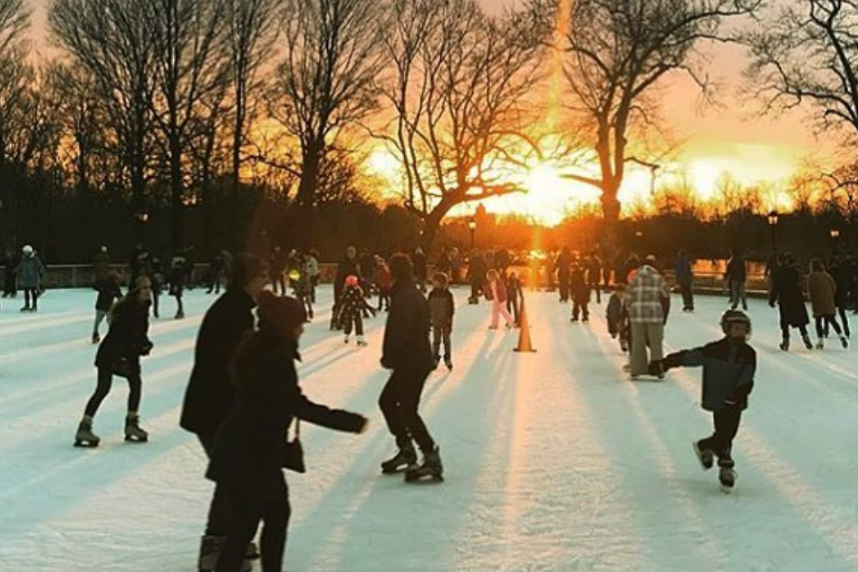 Nowhere is finer than an ice skating rink on a sunny winter day. Photo: @dan.thaaa.man

Even if it has been a while since you’ve made your way around an ice skating rink, it will be a fun excursion on a sunny winter day. There’s something actually therapeutic about gliding in circles, and the indoor/ outdoor rink at LeFrak Center at Lakeside Prospect Park is big enough that it never feels too crowded. It also can be an inexpensive day, especially during off hours. The rink is open every day from 9am-5pm, so if you can avoid the weekends, you may have the rink basically to yourself. It’s also an economical activity, priced at $7.25 (weekday) or $10 (weekend), with skate rentals an additional $7. If you plan on skating a lot this winter, or over your lifetime, you might think of investing in a pair of your own skates. Purchase a pair of kids and adult skates at Good Footing (316 7th Ave, Park Slope) and you can also bring them in to get sharpened for free. If you are purchasing a pair for a kid, you can bring them back every year and exchange for a larger size for a nominal fee. 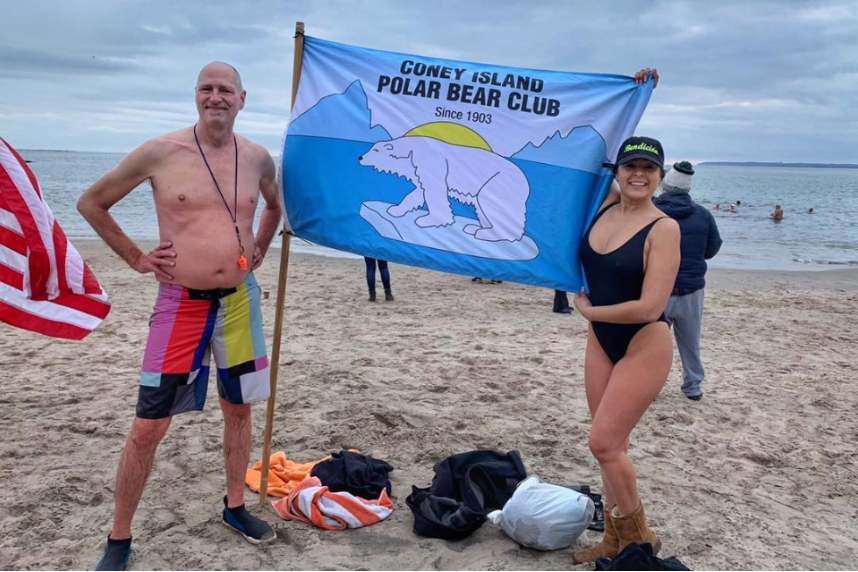 This sport isn’t for the faint of heart (or probably anyone with heart problems of any kind.) Photo: @meli__mels

Best known for their Coney Island New Years plunge, the Polar Bear Club actually meets to swim every Sunday until April 1st. Founded in 1903, it also has the honor of being the oldest winter bathing club in the United States. Membership is currently closed, but if you plan accordingly, and start planning for New Years now, maybe you’ll get a spot for next year. I mean, if you want to swim in the freezing cold, for fun.