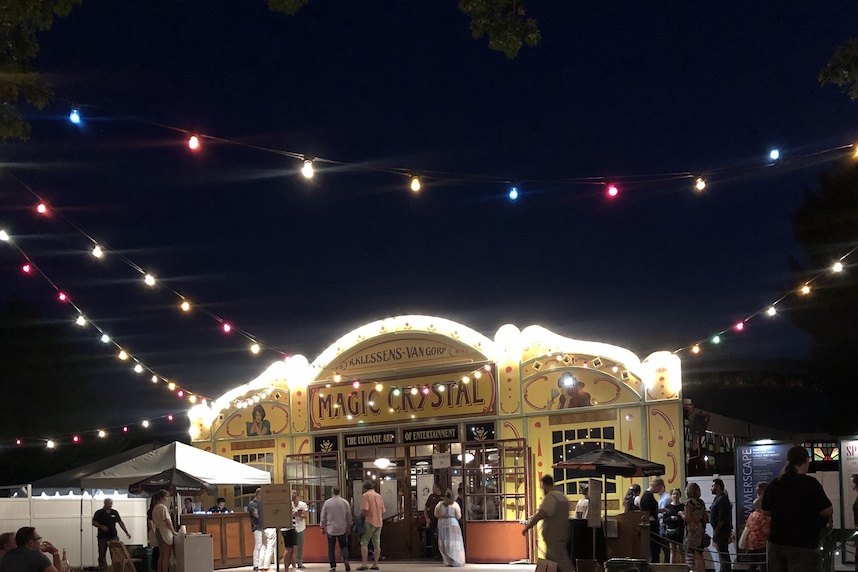 For a brief period from 2006 to 2008, a stained-glass and mirrored circus tent was installed at the old Fulton Fish Market in the South Street Seaport. It hailed from Europe, as all of these vintage tents do–spiegel is German for mirrors, and there are only a handful left from their heyday in the 20s and 30s, when they served as dance halls. At night in its new home, it became a cabaret venue, filled with wild acts like a man pulling nails from his nose and topless fire dancers. At least I think that’s what I saw–my memory is fuzzy on the details, I just recall it being an amazing vaudeville/burlesque performance.

Spiegelworld has since moved on to Vegas, but there is another Spiegeltent set up near Bard college in the Hudson Valley, which has been a regular part of their annual SummerScape programming. The lineup is filled with divas and downtown icons, and this summer I finally made the trip to see a show there: John Cameron Mitchell reminiscing about the making of Hedwig and the Angry Inch. The experience, aided by Mitchell’s glorious performance and hilarious banter, was just as magical as I’d hoped, and it was worth coming early to the first performance of the night to tour the Bard campus beforehand, which includes a performing arts center designed by Frank Gehry. Afterward, you’re able to hang out in the beer garden or stay for a dance party. If the Hudson Valley is a frequent destination for your summer weekends, it’s worth carving out a night to see a show here.